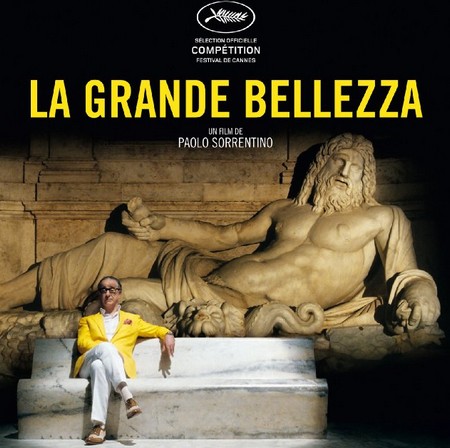 This article titled “The Great Beauty’s Toni Servillo: playboy of the Italian world” was written by Catherine Shoard, for The Guardian on Thursday 29th August 2013 17.27 UTC

Toni Servillo clutches his cigar throughout the Cannes press conference for his new film. The following day, he still has it, tight between his fingers. Sometimes, it is transferred to the corner of his mouth, gripped between teeth, Groucho-style. Mostly it rests in his hand. Throughout, it remains unlit. He quit five years ago, he explains, when I ask if he is going to go smoke it soon. “This is therapeutic. It helps me resist.”

I’m amazed. It’s not a temptation? He shakes a head flecked with stubble, topped with a puff of white. His face, folded and rubbery as a seal, creases briefly then returns to neutral. He and the translator share a look. The look of those who know what it is to quit smoking.

This superficially louche, but actually slightly strange and repressed little ritual is a rare point of overlap between Servillo and his character in The Great Beauty. The movie is a masterpiece, a grand swooning epic, lush to the point of insanity, Fellini turned up to 11. Servillo plays bon vivant socialite Jep Gambardella, a Rome playboy who wrote a fine novel in his youth but has since devoted himself to immaculate indolence. By day he rests and reads a little; by night he comes alive, a vampire in a linen suit, throwing great raves for primped and preened pals in his penthouse. Early in the film, a journalist comes to interview him about his defunct literary career; he berates her for caring (intellectually, Jep is a closet puritan).

Servillo shares the feeling. “That an actor is so often asked their opinion on soccer or cuisine or politics or public transport,” he says, via a translator, “is part of the degeneration process in showbusiness. Politicians in Italy seem to spend so much time giving interviews, they don’t have time to make the laws.”

And what’s the effect of such focus on superficiality? “We have lost insight. We don’t seem to have the necessary concentration to ponder in-depth, or to set up a dialectic confrontation. We just spend time speaking our opinions and this creates a multiplication effect of confusion and chaos.” He sits back and sucks on his cigar.

Servillo is a singular star. As Criss Henderson, director of a Chicago theatre where he recently performed said, he’s actually plain confounding. “I’m almost at a loss to describe him. He’s extraordinary. He isn’t stamping his performance with any movie star quality. He’s simple.”

In cinema he is best known to English-language audiences as Paolo Sorrentino’s muse, the man who has had a lead – and a big hand – in the director’s best films. He was the dignified gangster in The Consequences of Love (2004), the slippery, cadaverous prime minister in Il Divo (released in 2008, the same year he starred as the chilling crime boss in Matteo Garrone’s Gomorrah). He has a thriving, highbrow theatrical career, co-founded a major company called Teatri Uniti in 1987, has worked solidly in all mediums for the past three decades.

Yet the key to this pre-eminent Italian actor of the age has to be his hypnotic unknowability. In The Great Beauty, his mask of sardonic disregard is mesmerising. Jep is gentle, kind, attractive, and also a coward who smirks hopelessly, through the Botox, in the face of ageing. (Servillo, 54, plays 65 in the film, and could probably pass for it.)

Italy, he says, is especially concerned with la bella figura, in particular “the entrepreneurial class”. “They seem very much obsessed with the present. They disregard the past and forget to plan for the future. It is this that triggers this general atmosphere of what I call a moral lack of tone.”

Out of character, Servillo’s face loses a little of its intrigue. He looks normal, speaks neutrally, whatever the content. I ask at one point why Sorrentino’s films are more acclaimed outside Italy, where people can’t hope to pick up the nuances (there’s a fair bit in this one about the specific disposition of the Neapolitan flâneur). “I don’t really care,” he says, mild and smiling, and meaning it.

The Great Beauty is intentionally overwhelming; its feast of riches borderline nauseating. In an early scene, a Japanese tourist keels over while sightseeing; perhaps with the heat, more likely intoxicated by the visuals. Ultimately, it suggests that only by living in poverty can one hope to survive such a saturated environment.

“I think that beauty can injure you to death,” nods Servillo. “It can cause an injury that can never be cured. Or it can so traumatise you, your life changes direction. The beauty of the harmony of nature that is for ever lost, or a daily rite that you perform, or diving into the sea for a swim. Those experiences are going to mark you.”

So he is not fearful for the audience’s health, sitting there, soaking it up? “No, no, no,” he says, cigar drumming the table. “Each single gesture of art must be daring. One must not be concerned with the side-effects.”

The Great Beauty is released in the UK on 6 September.