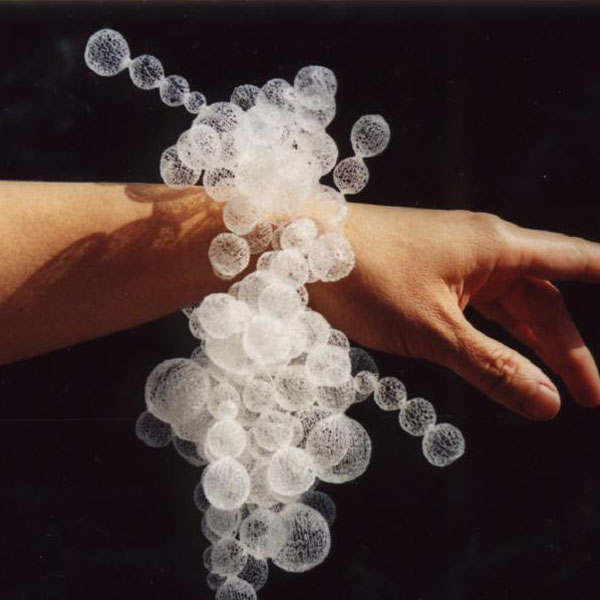 This article titled “The future of luxury goods – from toxic waste urns to a compass that helps you get lost” was written by Oliver Wainwright, for The Guardian on Tuesday 21st April 2015 12.41 UTC

How to exhibit luxury in a museum that has it all? The V&A is a temple to the spoils of empire, a labyrinth of luxury that oozes opulence from every gilded nook and sculpted cranny, that bursts with the booty of tyrants and the trinkets of dictators. From the moment you encounter the grotesque glass entrails of the chandelier above the ticket desk, like the centrepiece of an oligarch’s banquet, to the last pearl-encrusted gown in the fashion galleries, it is a parade of outrageous extravagance.

Given this context, what could an exhibition on luxury at the V&A possibly entail? Will we find Karl Lagerfeld bathing in caviar while inhaling bottled air imported from the Swiss Alps? The plywood hoarding that greets visitors at the door thankfully suggests no.

“We wanted to question the very idea of what luxury is and open up a debate about where it might go in the future,” says Jana Scholze, who curated the exhibition with Leanne Wierzba. “99% of the museum’s collection could fall under the ‘luxury’ heading, so the challenge was to think about the labels we apply and what they mean.”

In the first room, where a great golden pendulum pours glass sand on to a plinth in the centre of the space, like a monumental egg-timer from Nero’s palace, pairs of objects are combined in cases under headings like Pleasure, Passion, Expertise and Precision. Under the title Investment, where you might expect to see a model of an empty tower of luxury apartments, are instead two extraordinary objects that show a huge investment of time and care.

One is a necklace that looks like the frothy foam of bubble bath, made by jeweller Nora Fok, for which each bubble was hand-knitted in nylon filament around a different-sized marble. The other is a series of glasses etched with dimples by Max Lamb, which increase in price according to the number of dimples – as both a reflection of time invested and the increasing fragility of the glass. Apparently these things shatter at 641 dimples; it’s a fine line between luxury and catastrophe.

There are many such things that provoke a childlike gawp – in a “wow, someone actually bothered to do that” kind of way – such as the Golden Fleece hat by Giovanni Corvaja, who spent a decade perfecting the technique of transforming gold into thread. The result of his quest? A fur hat made from 160km of golden hair, which took 2,500 man-hours to make. Sadly for Corvaja, it looks a bit like a normal fur hat that’s been spray-painted gold. Which makes his devotion to crafting the ultimate luxury item all the more intriguing.

The exhibition is co-organised with the Crafts Council and there is a definite emphasis on showcasing the pinnacles of craft skill, rather than luxury as defined by the forces of the market, or the iniquitous powers of the marketing machine. There is a Venetian chasuble from the 1670s, a lace-embroidered vestment that positively squirms with accomplished needlework, alongside the apogee of showoff watch-making: the platinum Perpetual Calendar by Swiss maestros Vacheron Constantin, the world’s oldest manufacturer of prestige wrist-wear. Its 265 moving parts can be yours for £100k from the Billionaire Shop.

But there is a notable absence of comment on what’s driving the production of these exquisite baubles, or the networks of galleries that promote them – and indeed who exactly is buying them. As the London skyline is increasingly transformed into a playground for the world’s ultra-high-net-worth-individuals – that group of shadowy billionaires who together control tn, enough to buy all the UK’s real estate three times over – it seems strange that their presence here remains hidden.

Such invisible forces of trade and patronage are hinted at in the second section, which speculates on the future of luxury and how our perceptions of value might change. Chinese designer Gangjian Cui fast-forwards to 2052, when our unbridled petrol consumption has transformed plastic into a rare, sought-after material, which he extrudes to create furniture with the delicacy of spun sugar.

Then there is Aram Mooradian’s Atlas of Gold Fictions, a project that maps the global gold trade and its impact on the natural landscape, beside a piece by his former tutors at the Architectural Association, the Unknown Fields Division. Their recent adventure, tracing the supply chains of consumer technologies, took them to Inner Mongolia, where the byproducts of the world’s smartphone industry are pumped into great toxic lakes. From this poisonous mud they have fashioned three ceramic urns – based on the amount of waste created to make a smartphone, laptop and smart car battery – which stand as ghostly reminders of the consequences of our luxury desires. It is an interesting response to the topic – particularly given that their trip was itself marketed as something of a luxury “expedition” holiday, at £1,600 a ticket.

Privacy also features as a future luxury commodity, in the form of Gabriel Barcia-Colombo’s DNA vending machine, a wry comment on the ready availability of data relating to the most intimate aspects of our lives. Will luxury be a realm where you can buy the DNA of those you desire – or one where you can protect your genetic code from the prying eyes of others?

Or, in a world where having more time and extra space are the most sought-after luxuries of all, perhaps the ultimate treat would be to stop the clock and simply lose yourself for a while. That’s Marcin Rusak’s take on the theme. He has designed what looks like an executive survival kit for getting lost: a compass that sends you off in random directions, a dial-less watch and a blanket to keep you warm on your journey towards ascetic enlightenment. It suggests that the ultimate luxury would be to escape from a world where possessing any of these objects matters at all.