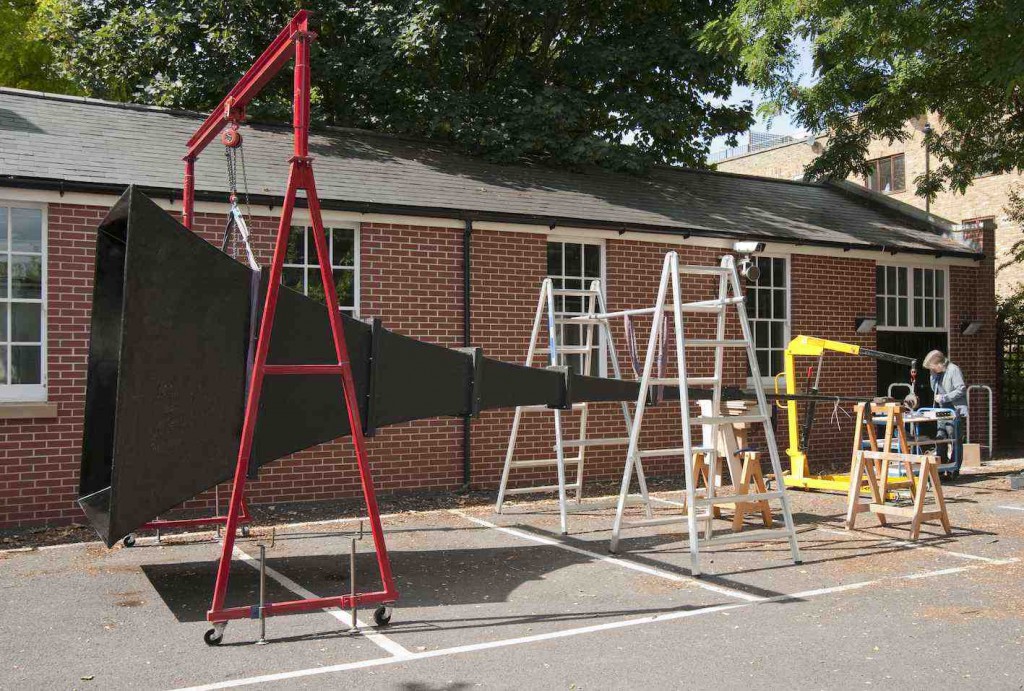 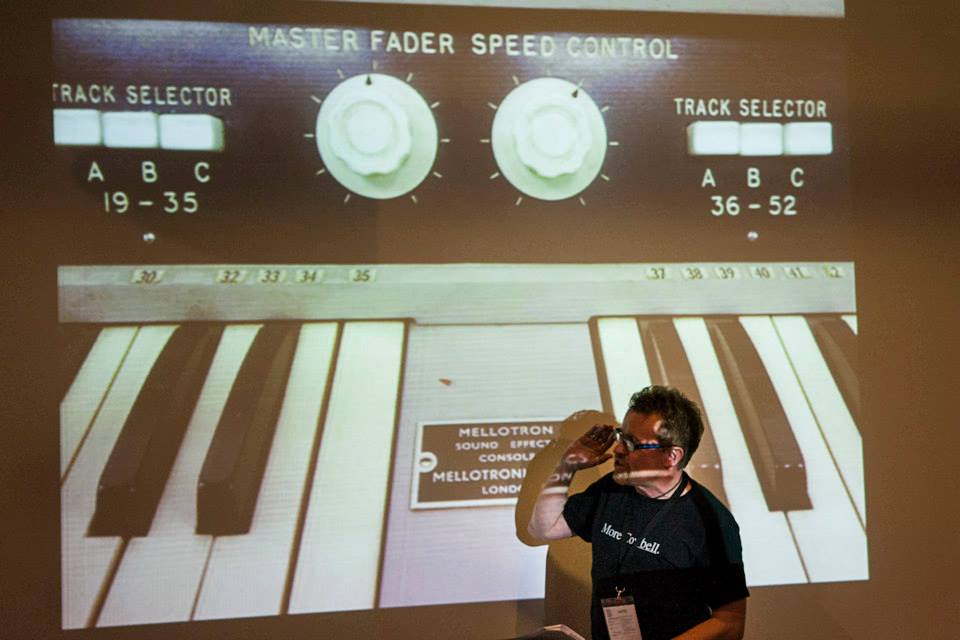 This article titled “The art of noise: how music recording has changed over the decades” was written by Christopher Fox, for The Guardian on Friday 16th May 2014 16.59 UTC

One of the great changes in the British countryside is that hedgerows and verges no longer glisten in the way they did 20 years ago. No longer does the sunlight catch the strands of tape that used to festoon thorns and grasses, lost reminders of another cassette jammed in the car stereo. It would eject, but would emerge trailing a loop of slender, slippery tape, the end snagged deep in the player’s insides. A helpful passenger might tease it free and painstakingly spool the tape back into its case, ready to play and jam again; more likely they would rip it from the machine and throw it out of the window.

Driving today has fewer distractions, hour after hour passing as the MP3 player shuffles through its enormous repertoire, and listening at home is equally trouble-free, a laptop and headphones doing away with the need for all those records, cassettes, CDs, turntables, amplifiers, wires and speakers. So much time filled, so much space saved; never before has music been so available and yet so immaterial. Perhaps it’s this immateriality that has provoked a revival of interest in older audio technologies, in ways of recording and listening that involve something more tangible than a stream of digital code. Tellingly, this is a revival led by people too young to have used these technologies when they were state of the art, probably even too young to have thrown that cassette tape out of the car window. It’s this generation that is buying vinyl, and it’s musicians of the same generation who are making the records, experimenting with tape recorders and enthusing about analogue sound.

Some of this is fashion, of course, an audio equivalent of steampunk or hipster beard-growth, but there’s something more significant going on as well. The march of progress has taken us from innovation to innovation – mechanical to electrical, 78 to 33⅓, mono to stereo, LP to CD, Walkman to iPod – each new technology overwhelming us with its superiority and the way it solved recurrent problems in audio engineering – fidelity in recording, more signal and less noise in playback, longer listening times. Resistance was futile because the two halves of the recording industry marched hand in hand, phasing out production of older playback equipment as new formats were introduced.

Only now, when that march seems to have reached some sort of destination – all the music in the world available at any time, usually at little or no cost, in crystal-clear recordings – is it possible to question whether this is really where we want to be, or whether we might instead like to revisit some of the points along the way. It’s this retrospection that is allowing us to take pleasure in the special characteristics of old recording formats, to savour the realisation that technologies are not transparent, but put their particular stamp on the experience which they mediate. Etching, silk screen and lithography have all been superseded by more efficient printing methods, but visual artists continue to use them; perhaps music has reached this point too.

A process such as etching, cutting an image into a plate and then printing it affects what can be depicted and how we see it. In the same way, recording formats shape how musicians work and how we listen. Pop songs are short and sharp because in the days of analogue recording a song could last no longer than the time it took the gramophone needle to cross the narrow gap between the edge of the record and the maker’s label in the middle. Whether it was a 10-inch shellac disc turning at 78rpm, or a seven-inch single turning at 45rpm, the musical discipline was the same: there was time for variety – introduction, verse, chorus, middle eight, instrumental – but there had to be a beginning, middle and end too.

How the music was recorded was also important. For the first 50 years of the recording era the manufactured cylinder or disc was a duplicate of a live performance. As the musicians played, the disturbances they created in the air were caught by a horn, later a microphone, and etched into a groove. But with the advent of magnetic tape it became possible to combine layers of time, recording different performances side by side on the same length of tape. As tape technology developed in the 50s and 60s, the number of tracks multiplied, and musicians’ imaginations could wander through a labyrinth of takes, re-takes, overdubs and patches. With more and more tracks available nothing needed to be thrown away; recording became a sort of musical hoarding. Not sure about the bass line? Don’t delete it, just mute that track and add another version.

Multiple options can breed indecision, otherwise known as remixing. The history of pop music in the 1970s is full of tales of release dates postponed while artists agonised over how to create a definitive version out of all that accrued studio time, stacked up, track upon track, on the master tape. In the 1980s indecision became a marketing strategy – release one mix, then another, then another. In the age of the internet indecision was even promoted as a sort of shared creativity – don’t decide, just put everything you’ve got online and let the fans do the work.

But it is recording formats that matter most to listeners, and now that the LP is with us again it’s easy to see why we missed it. There’s room for enough of one sort of music – a Brahms symphony, Kind of Blue – but not too much. There’s a necessary break which, especially in pop music, imposes a set of helpful creative questions: is side two a variation of side one or should each new side offer a new style, a new energy? Above all, analogue formats remind us that in recording and listening we don’t have to be passive. In an age when we can wallpaper our lives with a random shuffle of MP3s, there’s something splendidly willed about choosing to put a record on a turntable. It’s a choice that necessitates more choices. CDs end in silence, but the scratch and click of the centre groove on an LP is a nagging call to action: get up, turn me over, or choose something else. There’s a hint of wilful destruction too, knowing that each playing spins the disc a little closer to its ultimate ruin.

My involvement with the record industry began just as the last LPs were being cleared from the shelves, so I’ve only made CDs. But a year ago I began to make plans for an LP of music I have written for the cellist Anton Lukoszevieze. As we only had enough music for one side of an LP I needed to write a new piece for the other side and I decided the music should, in some way, be about recording itself. The result is called re:play and begins with the cellist making a series of recordings of himself; as he listens back to what he has recorded and then tries to play the same music again, the recordings provide audible evidence that, try as he might, he can’t recapture what he initially played. To make this even clearer, each recording is made with a different technology, and in the version we made for BBC Radio 3 last month we used a Dictaphone, a Studer tape recorder and an Edison wax cylinder phonograph.

The first two were easy to find. The Studer was the work-horse of BBC radio studios until the digital age and the Dictaphone has been a lo-tech favourite of experimental musicians for many years; it’s battery-powered, fits in the palm of a hand, and distorts any sound it records. Edison’s machine, on the other hand, is a real antique and came with its own curator, Aleks Kolkowski, who carefully attached a large conical horn to the hand-cranked recorder and warmed up a wax cylinder with a hairdryer to soften the wax. The hairdryer may not have been authentic but everything else was, and when the recording was played back it sounded as if my music had been transported back in time to the early 1900s.

After the session I talked to Kolkowski, a violinist who works mostly in free improvisation, about the allure of the phonograph. “I saw my colleagues playing with laptops”, he told me, “and I wanted to do something else.” In particular he wanted to make music “influenced by post-1945 electronic music but using pre-electric technology”. He told me too about his most recent project, an installation called The Exponential Horn: In Search of Perfect Sound, which will open at the Science Museum on 20 May and has at its heart an “audio dinosaur”, a 27-foot horn loudspeaker.

The horn opens from an initial 4 sq cm to a 2.15 sq m mouth and is a reconstruction of one of the most popular exhibits in the Science Museum in the 1930s. The original was commissioned in 1929 by Roderick Denman, the Science Museum’s then curator of telecommunications, and was designed to reproduce the widest possible sound frequency range. Once a week this was demonstrated with broadcasts from the BBC’s London Regional Service and in Kolkowski’s installation the audio demonstrations will include sound art, new poetry and archive radio footage, with broadcasts from the BBC and Resonance FM as well as new work.

Audio nostalgia? Perhaps, but, like me, Kolkowski is interested in the way technology affects the processes of recording and listening. He is, he says, “very ambivalent about recording” and, because he wants to make “recordings that sound like recordings”, he chooses to work with technologies that very obviously impose themselves on what is recorded and how it is heard. For him the fascination of the Science Museum’s giant loudspeaker is not only its power and fidelity but also its limitations; there is, he says, an “incredible sound presence in front of the horn, almost three-dimensional” but as soon as one steps away “the sound changes dramatically”.

In 1972, in Ways of Seeing , John Berger described how, “for the first time ever, images of art have become ephemeral, ubiquitous, insubstantial, available, valueless, free”. Some time in the last decade innovations in recording and distribution reduced music to a similar condition, but it may be that installations such as The Exponential Horn and the boom in LP sales will restore some of that lost tangibility and substance, music to value rather than to throw away.

• Christopher Fox’s re:play will be broadcast on Radio 3 in the summer.