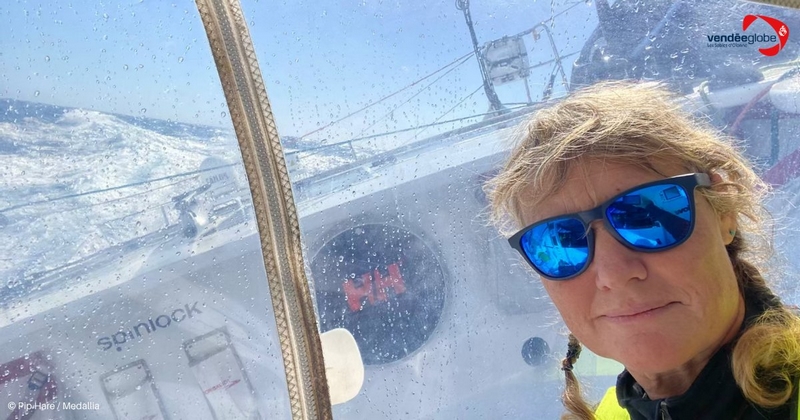 This article titled “Skipper Pip Hare on the toughest test in sailing: ‘It’s about coping with adversity – on your own'” was written by Sam Wollaston, for theguardian.com on Wednesday 16th December 2020 12.00 UTC

Pip Hare has just a few things to sort out, and she needs to have a check outside. She will text me again when she is free to chat, which she does. Hi, Pip, where are you? “Heading south-east across the South Atlantic,” she replies, cheerfully, casually, as if she was saying she was heading home across the park.

I can hear the South Atlantic, fizzing past in the background, and the creaks and groans of her 60ft boat Medallia, as it blasts towards the Southern Ocean. It’s glorious out there, she says. “The wind is moderate, the sea quite flat, the sky as blue as can be, with just a smattering of clouds, a sign that the low pressure is catching up with me. I’ve got three sails up, the boat is full of energy, flying along at between 18 and 20 knots. The colours are amazing.”

Pip Hare, 46, a professional sailor from Poole in Dorset, is taking part in the Vendee Globe, the toughest test in sailing. Alone, non-stop, around the world. The race, which started on 28 November and might take as little as 75 days for the quickest round, runs from Les Sables-d’Olonne in on the west coast of France, down the Atlantic, then goes clockwise around Antarctica, leaving the Cape of Good Hope, Cape Leeuwin and Cape Horn to the left before returning to Les Sables-d’Olonne. When we speak, she’s in 23rd place out of 31. At the time of going to press she is in 18th place.

Hare is not going to win it but she might be the first Briton home. Of the four who started, Alex Thomson, one of the favourites, has retired after breaking his rudder. And, the day after our conversation, Samantha Davies hits something in the water at speed, causing structural damage to her boat and forcing her to limp towards Cape Town where she, too, retires – leaving just Pip Hare and Miranda Merron. Far from a typical yachty bloke on a flash boat, Hare is racing on a fraction of the budget of some, and her social media posts are accessible and joyful.

Her passion for what she is doing is apparent even via a dodgy connection from halfway across the world. “I love being in the ocean – there is so much to learn. It stretches you in every way and it is just the most beautiful experience, this interface between the machine and the natural world, and when you get it right it’s just so good.”

Doing it alone is really tough, though. “It demands so much of a person. You need a huge amount of knowledge – not just in sailing. You need to have the physical ability to keep going, you need mental and emotional resilience … On the land, there is always a way out, you can pick up the phone and ask someone else to do something for you, you can step away from a problem. But out here you have to deal with it. I force myself into being the best version of me and I love it.”

I want to know about Hare’s daily routine. She spends about half her time on deck, doing sail changes, trimming sails. The rest of the time, she is down below. Once a day she crawls through the whole boat checking for leaks, loose bolts and damage. There’s usually some maintenance; top of the list at the moment is a winch to take apart and grease. Then she spends two to three hours a day looking at the computer, the weather ahead, navigation, routing. The autopilot does nearly all of the steering.

She boils water on a little gas cooker to add to her veggie freeze-dried meals – curry, dal, macaroni cheese – “I’ve got a 10-day rolling menu.” And she has pouches of nuts to snack on. She has already lost the 4kg she deliberately put on before the start.

She makes fresh water with a desalinator. In the tropics, she had salt-water showers on deck, but as she gets further south it’s getting too cold and rough for that, so she heats a bit of water to wash with in the cabin. The loo is a bucket: there is no place for luxury or unnecessary weight on a race boat.

At the moment she is sleeping mainly at night, in little snatches, getting up every half an hour to look at the instruments, go outside, check everything is OK. But as she heads into the Southern Ocean, where there will be more daylight, she wants to start grabbing more sleep during the day. “Essentially, every time you’re sleeping, you’re introducing a little bit more risk into the equation.”

The previous night there was a dramatic rescue in the fleet ahead. The French sailor Kevin Escoffier’s boat slammed into a huge wave and broke in half, and he had only moments to send a mayday and jump into his life raft. His compatriot Jean Le Cam diverted, and eventually found him after searching for 11 hours.

“What happened to him was just terrifying,” says Hare. “Those who weren’t close enough to go and aid in searching for him were all just hoping he would be found and he would be OK.” The skippers are all in touch with the race committee in France and with one another; they have their own WhatsApp group.

You don’t go into the Vendee Globe lightly. “We do a huge amount of training, in personal survival, in fixing our own boats, all the things that enable us to be alone in the ocean. But you need to understand the risks,” says Hare.

She might not have even made it to the start line. A couple of years ago – when she had gained the necessary experience but had no boat or sponsor – Hare chartered an older boat, taking out a loan and starting a crowdfund to pay for it. She blagged a free berth in her local marina, and she toured local businesses, creating syndicates so they could put small amounts in each month. “I would turn up for races with a team of volunteers and friends and I would be parked next to someone who had a multi-million-euro budget and a professional team of 17 people.”

Budgets range from around £500,000 to many millions. Hare’s is around the bottom end. “Every time I thought it was over, someone else would sign up, and another cheque would come in.” She completed her qualification races, got her place in the Vendee, then Medallia came in as title sponsors.

Hare is proud that 75% of the four Britons who started the race (and 100% of the ones who remain in it) are women. “Sure, being strong helps dragging the sails around the deck, but actually it’s about technique, risk management, problem solving. Just as in ultra marathon running we are seeing women competing on equal terms because it’s about regulation and mental endurance, solo sailing is similar. When it becomes more about what’s in your head than how big your biceps are, then you can compete on equal terms.”

Does she get lonely? “No, not at all. I’ve been solo sailing for 11 years now. My first solo trip was from South America to the UK, on a boat which was my home at the time. I was absolutely skint, I had no satcoms, the boat was fairly down at heel. It took me 58 days to get from Uruguay to the UK and I basically had no contact with anybody in that time. Now, I’m talking to you on WhatsApp; contact is there if I want and actually I’m so absorbed in my day-to-day work I don’t feel I need any physical contact with people.”

Hare thinks the pandemic might have made what she’s doing more relatable. “One of the things sailing has suffered from in the past is that it can be viewed as a really inaccessible technical sport that is hard to understand,” she says. “But, actually, the sort of sailing we are doing is about coping with adversity, it’s about being on your own and it’s about problem-solving. So much of what we experience other people have experienced during the last year.” Does she have Christmas plans? “Well, I thought I’d spend Christmas alone this year,” she laughs. Alone in the Southern Ocean. No special food, no mini bottle of bubbly. But she does have presents, and little surprises snuck in by family and friends; treats, letters, an inflatable parrot.

While we have been chatting, the wind has got up, only by a couple of knots, but there is a lot more water coming over the deck, and she needs to go up and reconfigure things, bring the stacked sails down to keep them dry. It is still stunning out there, she says, and she holds the phone up for me to hear the ocean. It is sounding, if not angry, then at least demanding respect. I’d like to see it; she’ll send me a picture, she says. And she does.

At the time of going to press, Pip Hare is well into the southern Indian Ocean, lying in 18th place. You can see her current position here