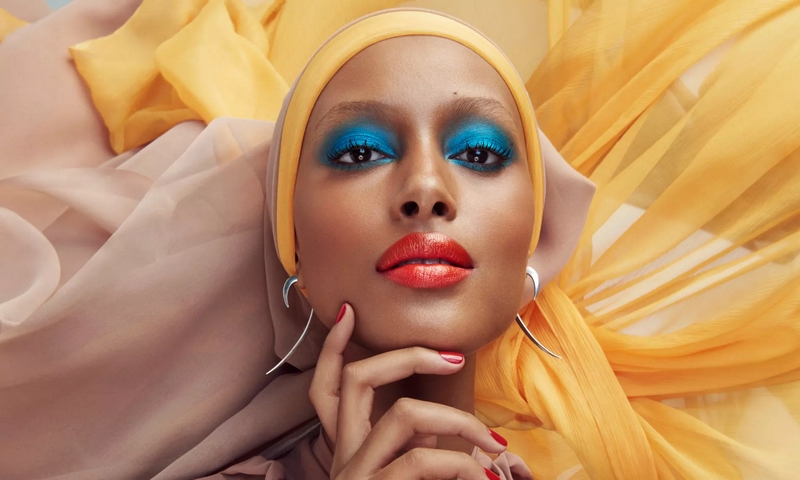 ‘I have always felt beautiful’: Shahira Yusuf. Photograph: Gustavo Papaleo for the Observer

This article titled “Shahira Yusuf: ‘I have always felt beautiful'” was written by Eva Wiseman, for The Observer on Sunday 2nd September 2018 07.00 UTC

When Shahira Yusuf signed with Storm Models, the first thing she did was sit down with her agent and write a list. These were her “boundaries”, the rules that stylists and photographers should be made aware of before a shoot. She must have her arms covered, she must have her chest covered, and her hair. She must not be expected to wear clothes that are very tight, nor anything that makes her feel uncomfortable. “I’m fully prepared for some people not to like me, but it’s just as possible that would be because I’m a woman as because I wear the hijab,” she says. “But I’m firm, and headstrong, and I’m not going to succumb to negative voices.”

The office of an international model agency is an interesting place in which to consider beauty. In reception a middle-aged man makes notes on the products he needs to buy to perfect his teenage daughter’s hair – she wobbles down the corridor in heels re-learning how to walk. The walls are covered with head shots: these are the faces that sell things, and these are the faces that define, for a season anyway, what beauty is. When only white girls, when only white girls with blonde hair and flat chests and shiny skin lead fashion campaigns and appear on the covers of magazines, then the implication is that other types of women are not beautiful. The impact of that ripples through women’s lives, influencing their self-worth, their identities, the limits of what is possible. Which is why this stuff matters. It matters that 21-year-old Yusuf, the youngest of eight siblings brought up in Stratford, east London, was signed by the agency that discovered Kate Moss. It matters that she is being promoted as the new face of “modest fashion”. Although, she says, matter-of-factly, “I have always felt beautiful.”

In March, British Vogue featured a hijab-wearing model on its cover for the first time. Applause echoed across the media, but the model Halima Aden (who was born in a Kenyan refugee camp) wasn’t included solely because of a move towards diversity and equal representation – it was a canny, market-led move. The Islamic fashion industry is set to be worth £267bn by 2021. Yusuf joins a handful of young women whose hijabs mean that as well as holding down a modelling career, they have inadvertently become ambassadors for their faith. “I’m interested in talking about being Muslim,” Yusuf says, “but I’m not interested in being a role model. I feel that’s too much responsibility to put on a person. I do get, though, that we need more young people to look up to.”

It was just before the 2016 referendum, as she became aware of the lack of NHS funding, that Yusuf decided to study politics – the Grenfell Tower fire cemented her decision. She plans to start a politics degree this year, balancing (she offers a nervous smile) modelling and studying. But often the two will leak into each other, as, with her newly elevated platform, she uses Twitter for activism, and finds herself discussing Brexit and immigration in the make-up chair. “Whether we like it or not, everybody is forced to be politically engaged today.”

She rolls her eyes remembering Boris Johnson’s recent comparison of women in niqabs to letter boxes and bank robbers. “It’s so ignorant and it highlights the latent Islamophobia. Perhaps he’s trying to get attention and gain momentum, and hoover up the Ukip voters – either way, it’s such a silly comment. I don’t wear the niqab, but I know how it would make me feel if I did. Bank robbers? The idea that these are people who would do harm?” She tuts, generously. “These comments affect Muslims, they affect me.” There are positives to comments like Johnson’s though, she insists, because, “People like me are morally obliged to speak out, which means the media starts to reflect more Muslim voices.” What she’s learned, she says, is how important it is to “be in control of your learning, your understanding of a political situation. Don’t run with a single media source. I lean to the left – I like Corbyn, I think he’s acting for the majority – but I make sure I listen to other perspectives. It takes intelligence to be open to other voices.” She takes a measured breath, her hands in her lap. “The clever thing to do is listen to people who have relevant experiences. For instance, right now everybody should be listening to the experiences of refugees and immigrants, like my family who came from Somalia – immigrants are real people, deserving of empathy.”

When setting boundaries for every shoot, her intention is not just to ensure she’s not pressured to go against her Muslim beliefs, but also to start a conversation about what is expected of a model, of a woman. “The fashion industry is a patriarchy,” she says, softly. “Mine is a conversation all women should be encouraged to have, about how comfortable they are showing their skin and their bodies, how comfortable they are being portrayed as sexual objects. I shouldn’t be listened to just because I’m religious. This conversation isn’t just for Muslim women.”

New shapes: graphic eyes
AB: If you’re bold enough to decorate your eyes with a slash of unexpected colour – as seen at Marni, Missoni and House of Holland – it has the most impact if you create a graphic, unblended shape. For the best colour pay-off, choose both a cream and a powder eyeshadow in a similar shade. Using a brush, draw and fill in your chosen shape with the cream eyeshadow. Don’t worry about creating a perfect shape. Follow this by pressing the powder colour into the shade you’ve drawn with a clean brush; the cream texture will “grab” the powder eyeshadow and set. To finish, dip a cotton bud into a micellar cleansing water and run it around your eye shape, leaving a clean edge.
RT: To get this look I chose a contrasting colour, but one in the same “cool” family, as blue tones compliment pinks and purples perfectly. Using matte top coats are a fantastic way to create a look easily. They turn any colour a more muted pastel shade with a smooth finish.
Try: Tarte Waterproof Shadow Liner in Bubblegum; MAC Eye Shadow in Sushi Flower; Lancôme Eau Micellaire Douceur; Muji Thin Cotton Buds; SUQQU Nail Polish in Colour 08; OPI Matte Topcoat

Vivid colours: eyes, lips, nails
AB: Traditionally, colour and drama in make-up is limited to either eyes or lips, but for A/W 2018 Chanel, Pam Hogg and Richard Quinn showed vivid colour on both. To try this yourself, choose a single colour statement to create a halo around your eyes and define your lash line with plenty of mascara. For the lips, try a bright colour with a more sheer, shinier finish. This will prevent the combination of brightly coloured eyes and lips looking too “clown-ish”. Avoid adding a third colour with blush, and instead just warm up the complexion with bronzer.
RT: We wanted to embody a 70s vibe in this look and that decade was all about glossy red nails.
Try: Kiko Long Lasting Stick Eyeshadow in Teal 11; Benefit Badgal Bang! Mascara; YSL Rouge Pur Couture Lipstick 13 Le Orange; Guerlain Terracotta Bronzing Powder 05; Smith & Cult Nail Colour in Kundalini Hustle

Matte marvels: fuchsia lips
AB: For a splash of colour that’s more fun than a traditional red lip, try the fuchsia seen at the Margiela and Roksanda shows. With a matching liner, outline and fill in your lips – a matte-textured lipstick forgives lip-shape corrections, so you can afford to draw a generous shape – then apply three or four coats of lipstick with a brush, blotting between each. Apply a final layer with your finger – this softens the edge slightly, and as long as you press colour upwards into the upper lip and down on to the lower lip, you’ll find the curve of your fingertip prevents it from bleeding over your lip line. For a really matte finish, use a fluffy brush to push some translucent powder through a single ply of tissue on to the lips.
RT: Adding a thin metallic bronze “reverse French” gives a touch of understated style. Using a nail-striping brush, lightly stroke a colour of your choice up the side and around the cuticle line. Tidy any mistakes with an old concealer brush dipped in nail-polish remover.
Try: Mac Lip Pencil in Candy Yum Yum; Pat McGrath Labs Matte Trance Lipstick in Full Panic; Butter London Nail Foundation Priming Basecoat; Morgan Taylor Polish in Bronzed & Beautiful; The Edge Long Brush