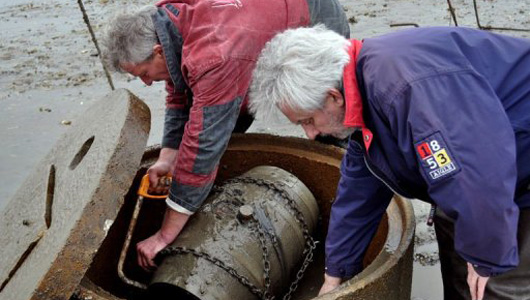 Sea could be the secret of good wine. This myth is now tested by a trio of French wine lovers. Sea vintages that dates from the 18th century inspired a vineyard manager, a barrel maker and an oyster farmer to make an experiment above and below water.

“I had heard a bunch of stories about wines ageing at sea,” Bruno Lemoine, who runs the cellars of Chateau Larrivet Haut-Brion in the southwest Bordeaux region, explained to AFP.

Bruno Lemoine asked his barrel-maker chum Pierre-Guillaume Chiberry to build him two small 56-litre wooden barrels in which to age his red wine by an extra six months. One was to be kept in the chateau cellars, the other sunk underwater among the prized oyster beds of the Bay of Arcachon, north of Bordeaux on the Atlantic coast.

When done — inspired by the challenge — they cycled 150 kilometres (93 miles) to Lemoine’s vineyard in June 2011 with the barrels in tow to see them poured full of the 2009 vintage, already aged nearly two years by this point. The barrel was picked up by Lemoine’s oyster farmer friend Joel Dupuch and rowed out to the low tide mark, where it was chained inside a concrete chamber that kept it protected while letting the water flow in and out. Both barrels were retrieved in January for the wine to be bottled, tasted and analysed in a laboratory.

“When we tasted it it was much better than it should have been,” said the expert taster Bernard Burtschy.

Lab tests helped shed some light on the process: despite the barrel’s watertight stainless steel plug, they confirmed that the wine was subtly changed by its ocean environment through a process of osmosis.

On the one hand the wine lost some of its alcohol content, while on the other it saw its sodium concentration rise, adding a subtly salty note that brings out the best of the tannins, Burtschy said.