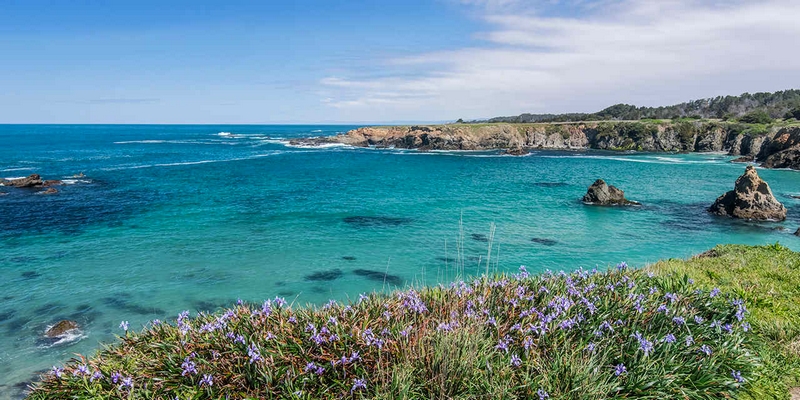 California serves up a veritable feast of experiences in a relatively compact space, making it a hugely rewarding destination. The food and drink offerings are superlative, and continue to raise the bar for chefs around the globe – California’s cities are among the most culturally important and politically progressive on the planet – and road trip opportunities abound, transporting you from challenging hikes to golden stretch-out sands. All in all, there’s a lot to see – so raise your expectations, glug a coffee, and get exploring.

Must eat, must quaff
Once the promised land for farmers, California – with its almost supernaturally fertile landscape – now draws food obsessives from around the globe. There’s an embarrassingly varied selection of excellent locally grown produce, all spectacularly showcased in a farm-to-table dining scene that’s the envy of chefs around the globe. But what makes Californian cuisine such an extreme thrill ride is the cultural fusion – some of the best Japanese, Korean and Mexican food you’ve ever tasted can be found in San Francisco, Los Angeles or San Diego.

Cooking and baking are competitive sports in California. Pick a winner in the almond croissant wars between cult San Francisco bakeries Tartine and Miette, and let the taco trucks tough it out for your affections in Los Angeles – start with sweet potato and feta at Guerrilla Tacos then try Guisados’ steak pisados.

Flight Centre tip: ‘Grab lunch in Solvang, a historic Danish village filled with charming European architecture, bakeries and boutiques. It feels like a world away from the rest of California’

California’s wine country – all rolling hills and russet-hued vineyards – deserves a special mention for its culinary chops as well, and has tasting rooms made for lingering in. Whether you feast your way around Napa and Sonoma, or opt for the less touristy, yet reliably excellent, wineries and restaurants of Paso Robles and Santa Barbara, every sip and bite will be a highlight.

Grapes are not California’s only fermented fruit, however. In San Francisco’s buzzy tiki bar scene, all manner of flavoursome cocktails are available – try a Hetchy Hetchy at Last Rites in the hipster Mission district – and distilled plants get a look-in in San Diego’s laidback North Beach neighbourhood; grab a punchy mezcal to wash down the fish tacos at Cantina Mayahuel.

Road tripping
The road trip originated in California with good reason; open highways and dramatically changing landscapes, generously reward freewheeling travellers. The classic Californian coastal road trip – along the Pacific Coast Highway (PCH), from San Francisco south to Los Angeles – should be high on any Californian itinerary. Driving south places you on the right-hand-side of the road for the best coastal views.

Big Sur is a highlight of any PCH drive, so take time to linger under canvas in a national park campsite. Alternatively splurge on a luxury lodge like Big Sur’s Post Ranch Inn, where, after a day’s hiking among the redwoods, you can stargaze while you soak your aching muscles.

Venture east out of Los Angeles and you’ll be in glamorous Palm Springs in about two hours; hit the Kimpton Rowan’s rooftop pool for downtown vibes and mountain views. Explore the quirky desert towns around Joshua Tree, spending a couple of nights at the charmingly old-school Pioneertown Motel. Just a two-minute mosey down the streets of this old western movie is Pappy & Harriet’s tavern, serving up exemplary barbecue to a killer soundtrack of live acts.

The state’s long-established road-trip culture has spawned a range of homegrown cafes and retro roadhouses that make every Californian pitstop an unexpected treat; take a booth at the Sugarloaf Cafe in Pinyon Pines to sample dishes from top-drawer New York chef Wesley Barden.

The great outdoors
California is almost unfairly blessed with some of the world’s most awe-inspiring and diverse outdoor scenery. Of the cluster of well-run national parks, Yosemite is obviously the big-hitter, attracting around 4 million people a year. Even so, it’s possible to get a slice of paradise to yourself, either by getting up early to beat the crowds, venturing farther on longer trails, or visiting in the winter months, when snowshoeing and cross-country skiing replace hiking and mountain-biking. Less than a mile from the national park’s south entrance, family-friendly Tenaya Lodge is a good option for overnight visitors.

For many travellers, however, a relative lack of crowds makes a stay at Sequoia and Kings Canyon national parks the more relaxed option. The two parks nestle side-by-side in the southern Sierra Nevada, east of the San Joaquin Valley, and it’s worth camping for a couple of days to take in the rugged foothills, deep canyons, lush valleys and some of the world’s largest trees. For a desert scenery fix, head to Joshua Tree, where you can hike – the two-hour Ryan Mountain trail is the park’s most rewarding – bike and climb.

Beyond the national parks, Californian cities take getting outside seriously. Los Angeles’s Runyon Canyon offers a respite for city-weary Angelenos, and the city’s hip eastern suburbs of Silver Lake, Echo Park and Los Feliz are well-served by Elysian Park. But San Francisco takes the crown as a city that offers the best of both worlds: the cultural heft of a financial powerhouse just a 20-minute bike ride from rolling hills, soaring redwoods and vast beaches. Cycling over the Golden Gate Bridge to Sausalito is one of the most memorable urban bike rides in the world.

Synonymous with the beat poets, jazz, and alternative rock, San Francisco also possesses a fiercely progressive spirit, having nurtured the 1960s counterculture movement and pushed LGBTQ rights to the fore in the 1970s and 80s. Today, culture lovers will enjoy wandering the murals of the Mission district as much as marvelling at the Louise Bourgeois room at SFMOMA (sfmoma.org). The Cartoon Art Museum near Fisherman’s Wharf, one of the quirkiest art museums in San Francisco, rekindles childhood obsessions daily (except Wednesdays).

Los Angeles has hugely upped its cultural and architectural credentials in recent years, with a cluster of Frank Gehry-designed buildings, such as the Walt Disney Concert Hall, and Liz Diller’s Broad museum of contemporary art, that have transformed downtown Los Angeles into a cultural heavyweight.

Beyond the big cities, the state still has much to offer in the way of culture, with plenty of independent galleries, and a supportive scene for local designers, artists and makers. Big Sur’s Henry Miller Memorial Library plays host to exhibitions and events, and the modernist mecca of the Architecture Design Center in Palm Springs showcases photography, architecture and design.

The state is firmly on every touring musician’s itinerary too, and is a great place to catch emerging bands at revamped golden age theatres and battered-but-beloved beach town dive bars – drop in at The Catalyst in Santa Cruz or Harlow’s in Sacramento to catch established acts and emerging talents.

Beach vibes
The Californian coast has been rendered in our imagination through the lyrics of the Beach Boys, the novels of John Steinbeck, and films as varied as Point Break and Rebel Without a Cause, but nothing prepares travellers for just how fundamental beach culture is to Californians. Cycle the promenade between Los Angeles’s Santa Monica and Venice Beach and you’ll see all of life here, from wealthy retirees walking their poodles to gymnasts performing tricks on the outdoor bars and hoops, picnicking families, and Venice’s new tech community catching a few waves before heading to work at Google. Staying in a 1920s-styled bungalow at the Fairmont Miramar Santa Monica is the most starry way to do a seaside stopover LA-style.

San Diego, a couple of hours south of LA (and easily reached by either rail or car) is a particularly beach-obsessed city, and a great place to linger on the sands, either at chichi La Jolla Cove Beach or at local surfer hangout Pacific Beach.

Flight Centre tip: ‘For those who came of age in the noughties, Santa Monica and Newport Beach are must-visit locations – the OC was filmed there!’

North of Los Angeles, Pismo Beach is spectacularly beautiful and surrounded by wineries, and as you venture farther north, the scenery only gets more rugged and dramatic. Big Sur is a highlight for visitors, a beach community that has become a refuge for bohemians, solace-seeking celebrities, artists and writers since the likes of Jack Kerouac called it home in the 1950s.

For many visitors, Santa Cruz is an unexpected delight, a surf- and music-loving town (spookily captured in cult movie The Lost Boys) that’s a great place to linger for a few days. Wipeout on a wave or two, then visit one of the city’s distilleries – head to Venus Spirits to try their award-winning gin – or breweries to dull the pain.

California dreaming? Speak to Flight Centre’s friendly travel consultants in person or over the phone for a tailor-made holiday to suit you, your travel style and your wallet