A Record to Change the Whole Art Market Structure 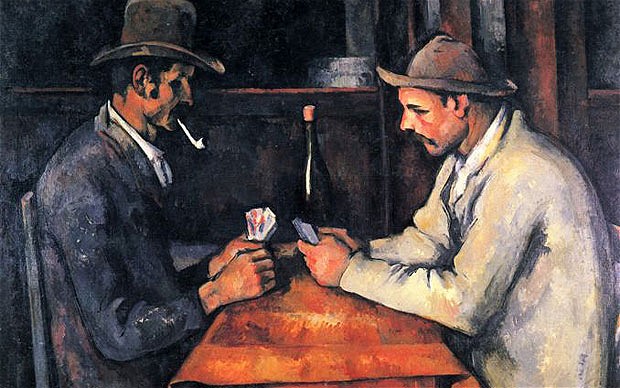 The sale beats the previous record of £88.7 million paid for Jackson Pollock’s No 5, 1948, in 2006.
The other four pieces in Cézanne’s post-impressionist series, painted in the early-to-mid 1890s, are held by the Musée d’Orsay in Paris, New York’s Museum of Modern Art, the Courtauld Institute in London and the Barnes Foundation in Philadelphia.
Victor Wiener, a leading art appraiser, said: “You take any art history course and a Card Players is likely to be in it. It’s a major, major image., the “Graal” of sales. Every museum’s curator dreamed to acquire it but no one could afford it. This acquisition is showing the Emirate’s ambition to open the most important modern and contemporary art museum worldwide. With a 7.990 square meter gallery, a 2000 square meter additional room, an auditorium, a forum with TV studio, two coffee shops, a restaurant, a store, a research centre, rooms for restoration and storage. In 2011, Qatar became the most important client for modern and contemporary art worldwide.
“Now everyone will use this price as a point of departure. It changes the whole art-market structure.”
The work was bought late last year from the estate of George Embiricos, a Greek shipping magnate. The price was only revealed two days ago in Vanity Fair Magazine.