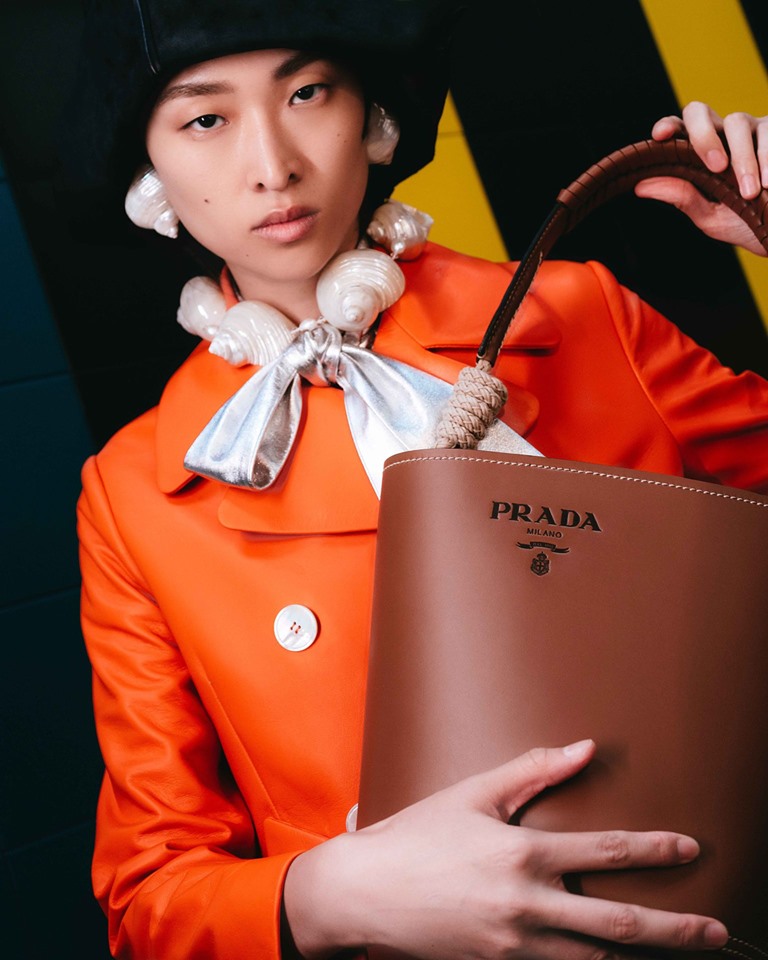 This article titled “Prada relegates fashion in favour of clothes” was written by Scarlett Conlon Deputy fashion editor, for The Guardian on Wednesday 18th September 2019 18.44 UTC

If fashion is currently getting a bad rap for being trend-led and disposable, Miuccia Prada – the ridiculously influential fashion designer responsible for the most-imitated trends – is only too aware of the conversational zeitgeist.

So much so that on Wednesday at her spring/summer 2020 show in Milan, “fashion” as a concept was relegated in favour of clothes, or as Mrs Prada put it: “It was more about personal style.”

It certainly showed in the 51-look show. For several seasons now, across both her womenswear and menswear collections, there have been products that seem tailored to appeal to the hypebeast market.

That flame shirt (hello Jeff Goldblum), the sandals, those big padded headbands. Now it is all about stripping it back. This collection featured outfits comprised of: knitted pencil skirts and ribbed knitted polo shirts; woven cotton shift dresses; fitted blazers; and an excellent line in practically seasonless LBDs.

“Simplicity is the first and most important thing, [more] than the clothes … [these are] timeless clothes you don’t throw away,” said Prada.

The designer’s relaxed approach to serving the season without a big splash showed in the finish and finer detailing. Romantic dresses looked fresh from the washing line (no iron in sight), sequin-appliqued skirts had a DIY feel as though customised, and shell necklaces looked as if they might have been made on the beach this summer.

While there were still the chunky high-heel loafers that Prada devotees worship, many of the outfits were grounded by woven raffia flats – the kind that you pull out for your holidays or for running around town. This element of the collection evoked a spontaneous feel which – Prada said, post show – was her intent.

From the wide-lapelled leather jackets and to the retro-printed suiting, a strong 1970s feel reverberated, while upturned sou’wester-cum-cloche hats reasserted the idea of clothes that stand the test of time. “The past is still very important, especially for me,” Prada said.

It is an apt statement given that the brand has clearly been reflecting on its position on the world stage of late. Like many of her fellow luxury fashion designers, Mrs Prada has recognised the need to address several pressing issues within her ranks to adapt accordingly and this year has seen her throw serious weight behind her words.

In February, the brand announced it would launch its Diversity and Inclusivity Council “to elevate voices of colour within the company and the fashion industry at large”, following criticism for figurines which appeared to contain blackface imagery in a New York store.

Related: Making the mundane must-have: Prada and the art of the fashion meme

In May, it announced it would go fur-free, starting with this collection in a move Prada said was meeting “[the] demand for ethical products”.

And in August, it joined 31 other fashion brands – including Burberry, Chanel and Zara owner Inditex – in signing up to the Fashion Pact, a mandate to work collaboratively with competitors to reduce negative impacts by the fashion industry on the environment and humanity.

This agile approach extends to the financial side too. In August, CEO Patrizio Bertelli credited the brand’s positive performance in the first half of the year (net profit rose 56.5% to €155m, or £137m) to the company’s decision to stop end-of-season markdowns. Further evidence of its strides to address what people actually want now.

As the first big hitter out of the door at Milan fashion week, all eyes were on this show to take the temperature of where Italian designers stand on taking a more sustainable approach.

While Italy’s fashion capital may not have the likes of Extinction Rebellion – the protest group which disrupted the London shows in an attempt to hold the industry to account – out in force, Prada kicked things off by showing that a new way of thinking is on her agenda.