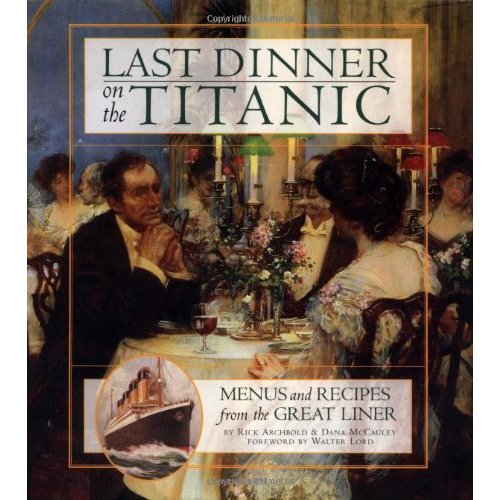 It is 100 years since Titanic struck an iceberg and sank on her maiden voyage on April 15th 1912 with the loss of over 1500 lives. Henry Aldridge and Son latest auction like its predecessors this year broke a number of world record prices. Leading the way was a first class lunch menu owned by Titanic Passengers Richard and Stanley May. The May brothers were travelling to Cork for a week’s fishing holiday and used the Titanic as their method to cross the Irish Sea.

This particular meal was the first held onboard Titanic on her fateful voyage, the cream of Edwardian Society would have enjoyed the feast on offer that included Fresh Lobsters, Hodge Podge and Roast Beef. The menu represented a true snapshot into the opulent lives that the first class passengers onboard lived. It sold to a private collector for £64000.

A second menu relating to Titanic was offered in the same sale, this was a very rare VIP example given to those lucky few who experienced a lunch held at the Grand Central Hotel, Belfast to celebrate her launch on May 31st 1911. Again selling to a private collector based in the UK against interest from a collector in Beijing, it sold for over £36000, another world record, this being for an item from Titanic’s launch.

Another star of the auction was the Fredrick Wormald collection. Mr Wormold was a Southampton man who was First class salon steward who signed onto the Titanic on April 4th 1912 having transferred from the St. Louis. As a First Class steward he would have received wages of £3.15 and he would have served the elite First Class passengers on the ship including those who enjoyed the April 10th menu sold for £64000.

Retro dishes on Titanic included: Oysters à la Russe, Salmon Mousseline Sauce with Cucumber, Rose Water Sorbet with Mint, and Waldorf Pudding. These recipes were also replicated by Dana McCauley in the “Last Dinner on the Titanic: Menus and Recipes from the Great Liner” cookbook.