The Fontenay is set to become a true modern classic, sitting on the tranquil banks of Lake Alster within a ten-minute walk of Hamburg’s city centre.

The Fonteney Hamburg is the newest Leading Hotel member in Germany. The hotel is named after the American ship broker, John Fontenay, who came from Pennsylvania to Hamburg in the 19th century and fell in love with the idea of residing on the beautiful banks of the Alster. In 1816, he bought several parcels of real estate and it is on this land that, 200 years later, The Fontenay will open its doors in 2017. 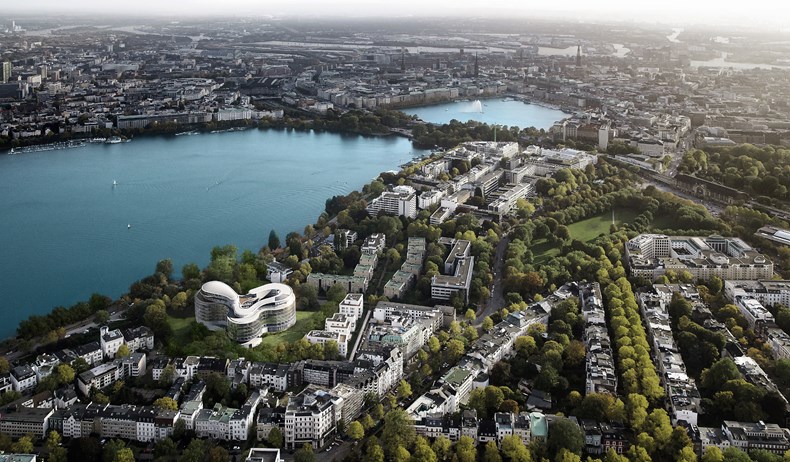 The Fontenay is the first five star superior hotel to open in the city for the last 18 years. Designed by Hamburg architect, Jan Störmer of Störmer Murphy and Partners, The Fontenay has a sculpture-like architecture that mirrors the fluid lines of the lake and surrounding parkland.

Featuring a façade of white ceramic tiles, the luxury hotel evolves from three fusing circles that form two interior open spaces, including the 27m high atrium, which will be flooded with natural daylight, as will all guest floor corridors.

The Fontenay will have 131 rooms and suites starting at a minimum size of 43m2, all with floor to ceiling windows and balconies offering views of the lake. The abundant sunlight, sparkling lake waters and lush parkland surrounding the hotel will be reflected in its interior décor. The use of warm colors and parquet wood flooring, along with 2.6m high ceilings as standard in all guest rooms, will amplify the sense of space and
light. The two top suites will be 185m2 and 245m2 respectively, both opening out onto large lake-view terraces. The hotel will have two restaurants; one all-day dining and another gourmet offering cuisine from a Michelin-starred chef. 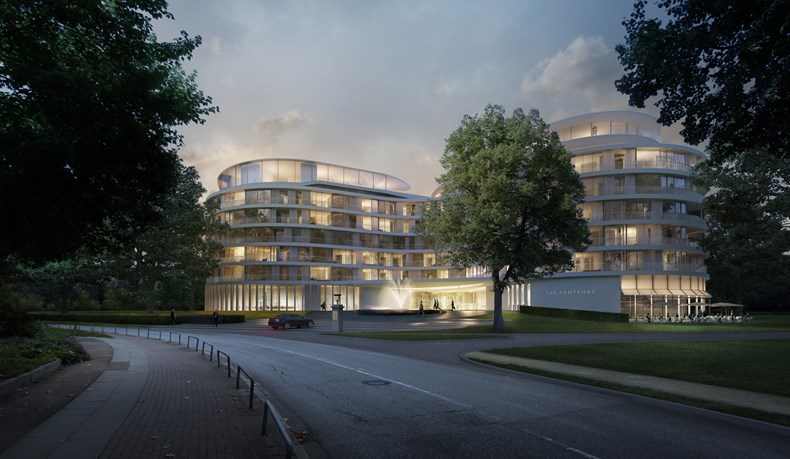 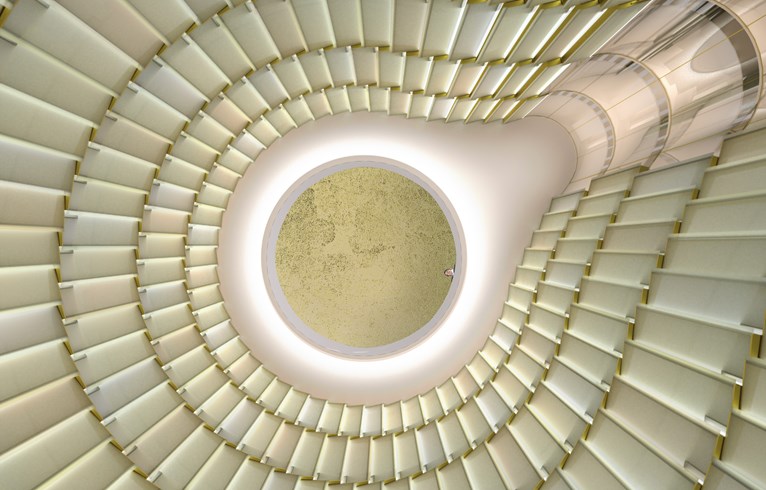 Outdoor living will be embraced at The Fontenay at every opportunity, from the terraces of guest rooms and restaurants, to the roof, where the bar will be the perfect place to watch the sun set over the city. Also on the roof will be a full-service spa, where the waters of a 20m horizon edge indoor/outdoor pool will appear to merge with the sparkling water of the Alster below.

The Fontenay is owned and developed by Klaus-Michael Kühne, majority shareholder and Honorary Chairman of the globally operating Kühne + Nagel Logistics Group, who seized the opportunity to build a hotel on the banks of the Alster as a lasting tribute to the city he was born in and the lake he grew up on. It will be the secon dhotel developed by Kühne and his wife, Christine, who in 2013 sensitively restored an 18th century castle in Calvia, Mallorca, opening it as a 38-room Leading hotel, Castell Son Claret.

“Our goal is that The Fontenay makes a lasting and positive contribution to the further development andenrichment of Hamburg, not only as a  business centre, but as a unique destination for international leisure travellers, embraced by its local  community,” commented Kühne. 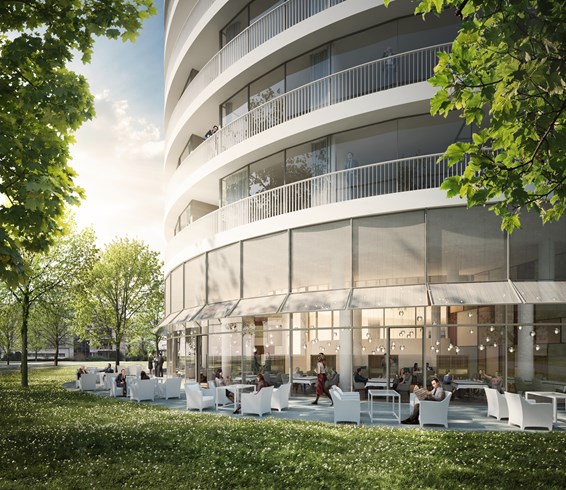 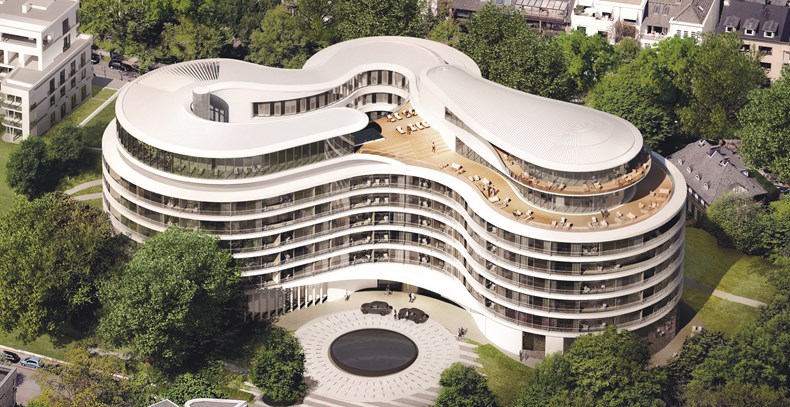 Hamburg is an elegant and vibrant city representative of modern, dynamic Germany, having recently been voted by German travellers as their favourite city, and has strong cultural and economic ties to the USA and UK.Germany’s largest waterfront city, life in Hamburg centres around the water for trade, culture and leisure, andthe city is a popular stop-off point for those touring Scandinavia. It has one of the world’s largest cruise ship ports and regularly plays host to ocean liners such as MS Europa 2 and Europa as well as Cunard’s Queen Mary 2 and Queen Elizabeth. It is also renowned for world-class art collections such as that found at the Hamburger Kunsthalle, and architecture such as the historic Speicherstadt, or warehouse district, which was added to the UNESCO World Heritage List in July 2015. 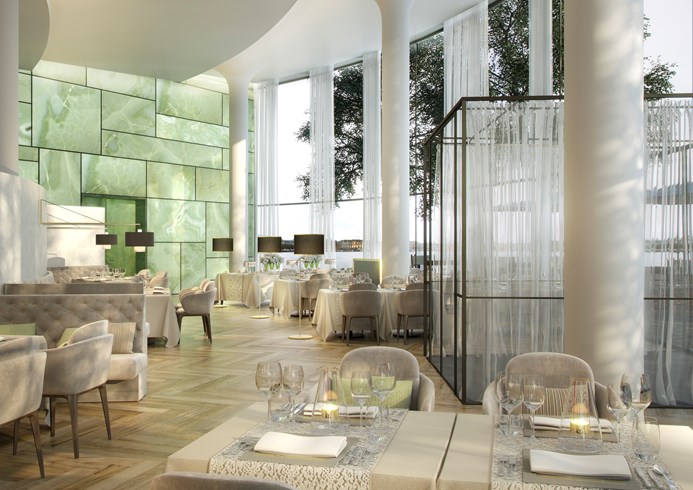 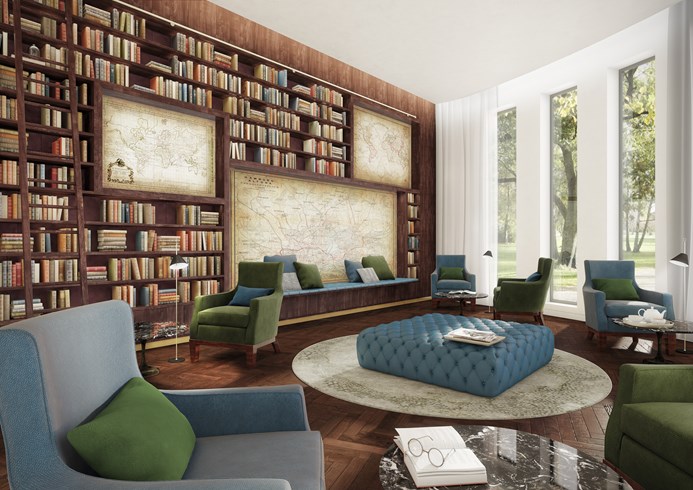 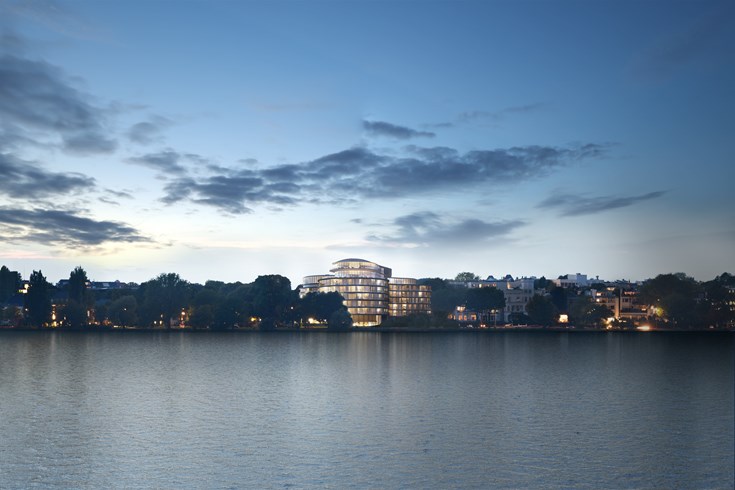 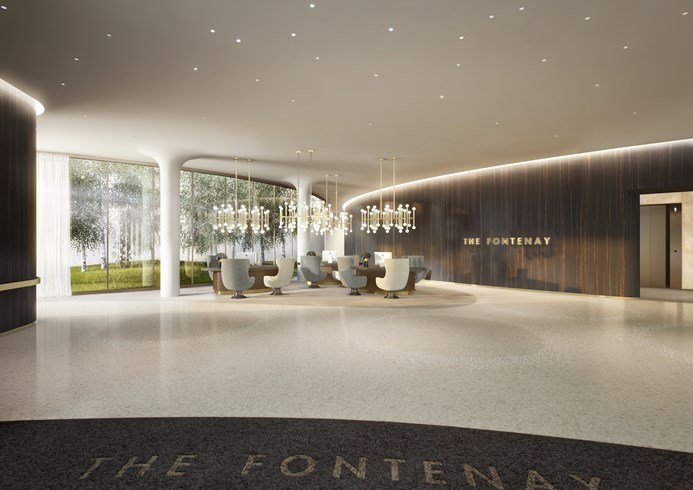 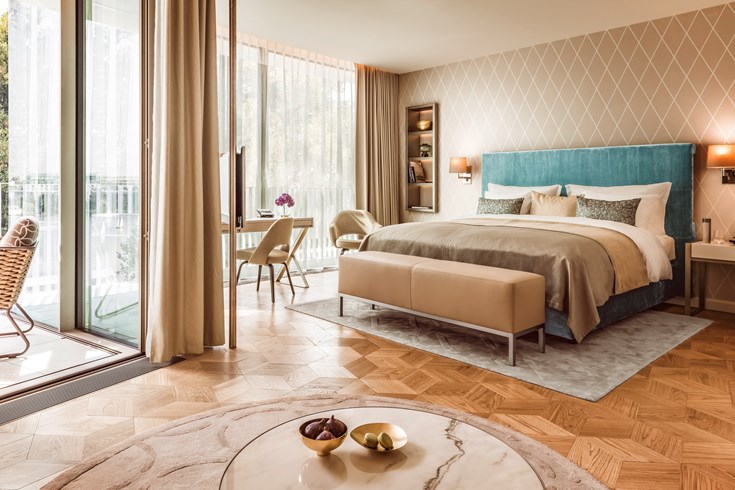 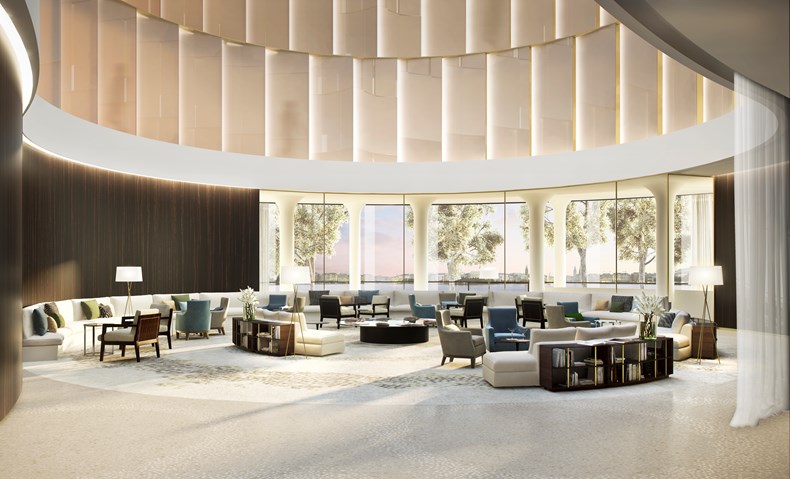 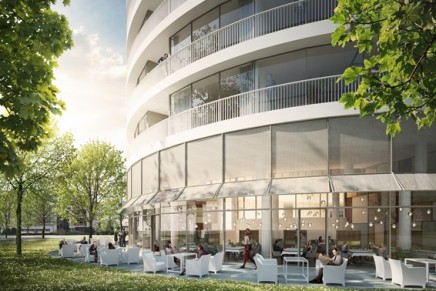 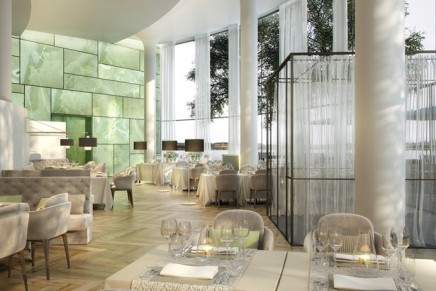 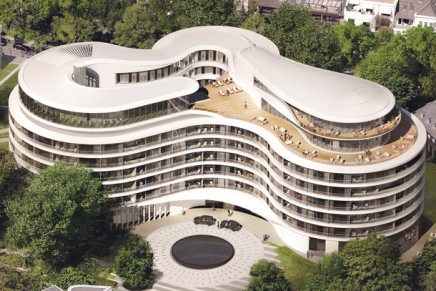 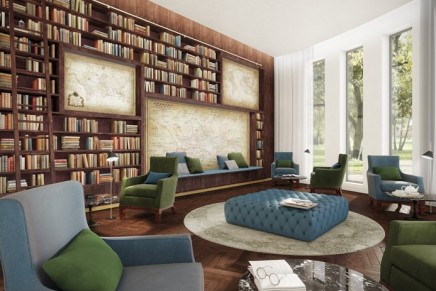 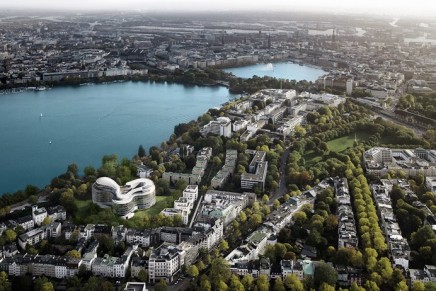 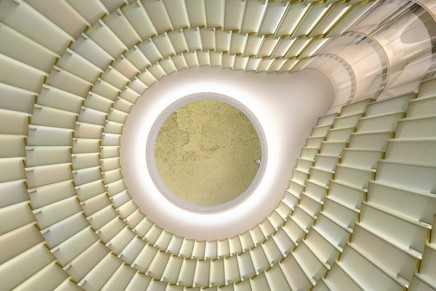 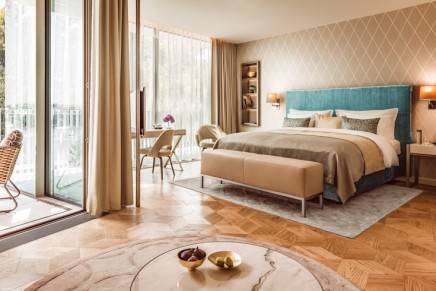 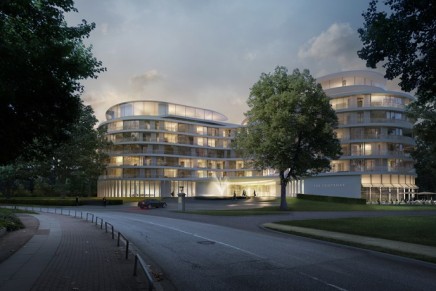 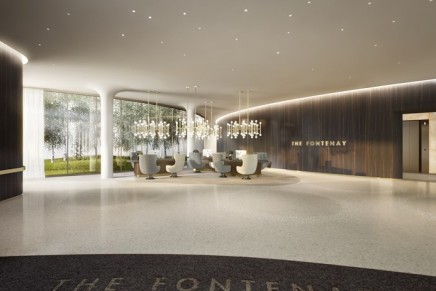 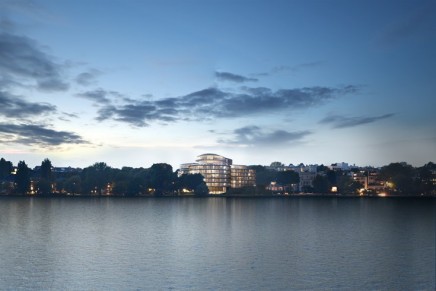