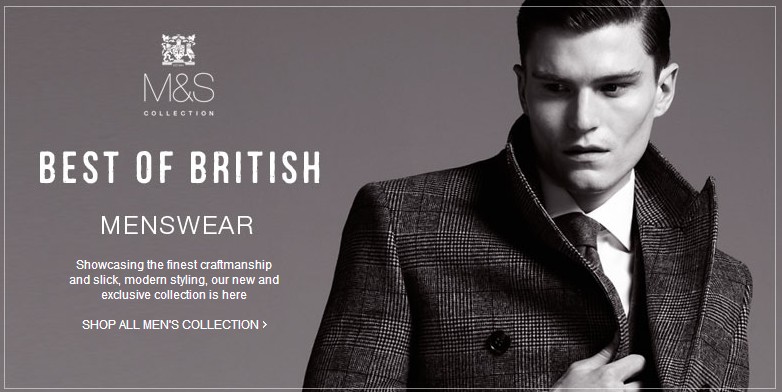 This article titled “M&S Best of British menswear range: not just a suit …” was written by Ed Howker, for theguardian.com on Friday 11th October 2013 10.43 UTC

Yesterday, at 9.30am, I found myself in the Marks & Spencer menswear department. Here, in this hitherto uncharted territory, something peculiar happened: I spent more money on clothes than I have ever spent anywhere before.

In truth, I am not M&S’s typical customer. For one thing, I’m the wrong gender – nearly 60% of those who buy menswear are women. For another, I have never felt loyal to this “Great British Brand”.

I don’t understand the difference between their men’s lines: Heritage, Savile Row Inspired and Sartorial. (Does anyone? What could they possibly be?) And, frankly, I’ve been suspicious that their clothes are of questionable taste and quality. But if I’ve never shopped there before, I will again.

Let me explain: this year, while helping two grooms dress for their weddings, I traipsed round every shop from Austin Reed to Zegna. I even tracked down Savile Row-trained tailor John Coggin – the Hannibal Smith of good suiting – who taught me the difference between a glued and floating canvas jacket (a floating canvas will mould to your body and wear better); about soft tailoring and roped shoulders; and how to buy a decent suit if your budget does not extend to bank-breaking bespoke services on Savile Row (£4,000) or off-Row (£2,000).

I learned why the men who “swear by” tailors in Hong Kong are often wrong: rent hikes and profit gouging has led many of the most expensive clothing brands to manufacture in the developing world. Luxury British tailors Gieves & Hawkes will make a marvellous made-to-measure suit for you – in Mauritius.

This is all the more miserable because the finest hand-cut and sewn craftsmanship is British. The finest cloths are made in Britain. But British men buy clothes on a high street filled with products from Asia, cut to look like styles from Italy.

This year, M&S has changed all this. Buyers trawled our mills and factories for the best cloths and cutters and produced a stunning “Best of British” range, which is probably a poor title because these clothes are the best in the world. Chosen from historic M&S designs, they’re some of the most desirable I’ve ever seen. The collection launched on Thursday.

Of course, there are those willing M&S to fail. Surveying the collection earlier this year, the Daily Mail columnist Liz Jones doubted that British men would buy it. “Men are different when it comes to clothes,” she explained. “Many are in thrall to labels, much more than women are.”

But she’s mistaken. I bought a suit and a jacket. The gentleman queueing behind me bought perhaps £3,000 of clothes. We were both buying labels that may not have been “designer”, but mean a great deal more than that. They represent generations of British craftsmanship and the very best of Britain’s manufacturing.

For example, my suit was constructed in Crewe by Cheshire Bespoke – the best factory-scale tailors in the world. It is hand-finished. There is a floating canvas. It will last a lifetime. The cloth, which was hand-cut, is a gray flannel woven by J H Clissold & Son – they are among the best weavers in the world. Their mill is in Bradford.

Other “labels” in the M&S range include Alfred Brown of Bramley in Leeds and Abraham Moon and Sons of Guiseley – both long-established, world-class cloth mills. There are coats and jackets made by Cooper & Stollbrand of Manchester, and shoes by Cheaney of Desborough. And while I paid £800 for my suit and spent £300 on a jacket, they cost a fraction of the prices charged by Ralph Lauren and other designer brands who employ the same British craftsmen to make their most expensive merchandise.

But M&S know they are taking a risk. To triumph, they hope that more British men discover the widening chasm between quality and brand. To consider spending so much on clothes, we must admit that good clothes are not disposable items. Crucially, for Best of British to work, the shoppers in menswear must become men again.

I asked the shop assistant serving me what he made of Liz Jones’s incantations of doom about Best of British. He considered for a moment and then said: “My job is to prove her wrong”.

I like the sound of that. The game is afoot. I just hope that “foot” is wearing a beautifully crafted Northampton-made brogue.