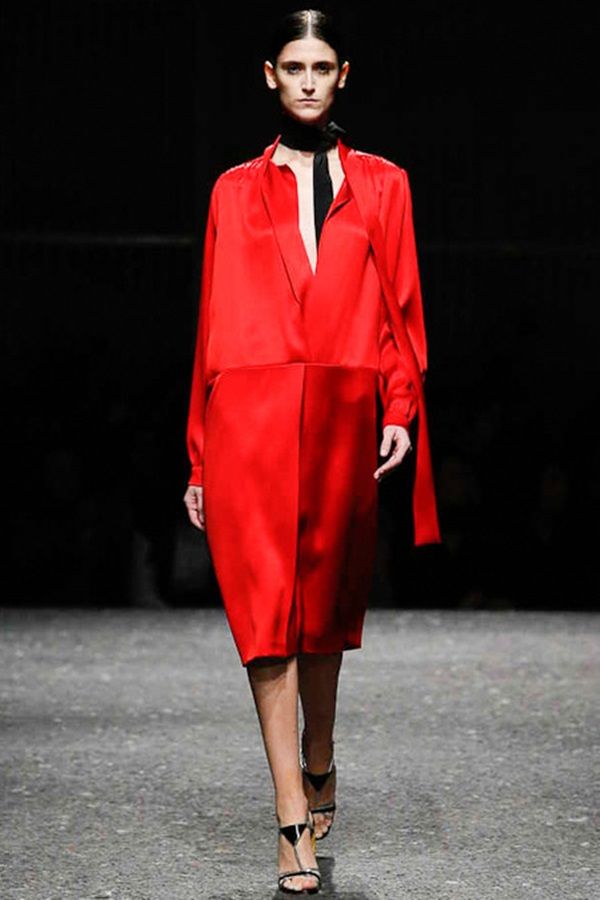 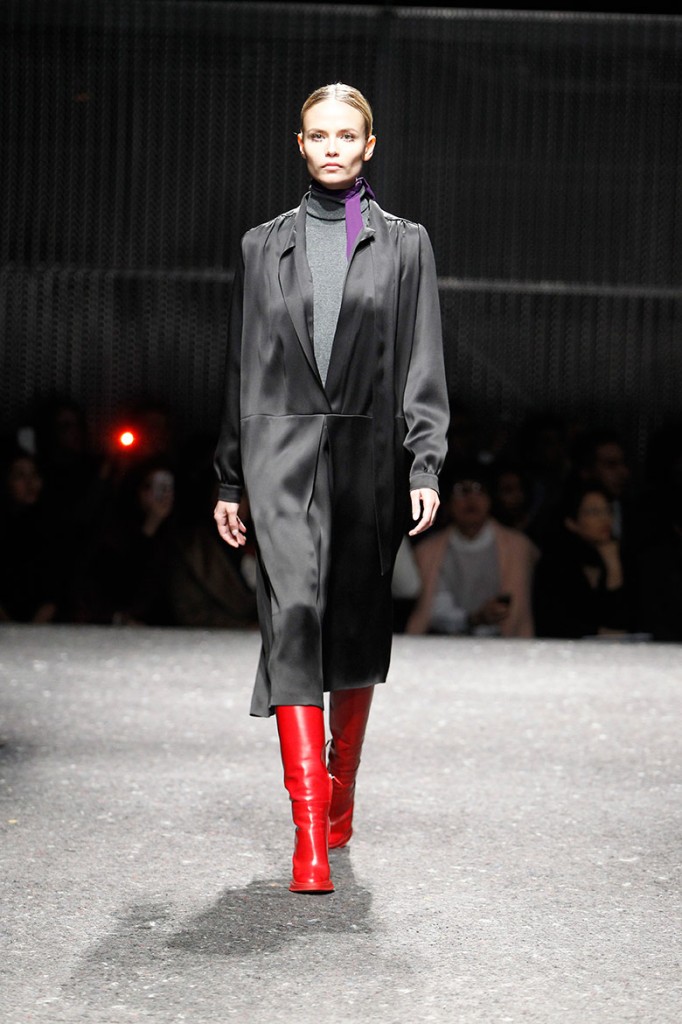 With satin dresses, see-through slips, gold coats and skyscraper heels, Prada’s autumn/winter collection had a kind of retro glamour. But, in Miuccia Prada’s hands, it was anything but cliched.

The show, which took place on Tuesday evening at Milan fashion week, had a similar set up to the label’s menswear presentation in January. Walls in the venue were covered in natural felt and the catwalk featured orchestra pits, two complete with string and wind sections and others containing sections of the show’s audience.

The German music was a clue to the collection. The theme first explored in menswear, 20th century European decadence, took flight here. From the first look – a black satin knee-length dress worn with scarlet boots – it felt late night and louche, ready for Berlin’s nightclubs. Art Deco industrial prints – the kind found on posters for Fritz Lang’s 1927 Metropolis – were on jackets and dresses while wedge heels resembled the skyscrapers built at this time.

The seventies, always a favourite Prada decade, were also present in a killer colour palette of red, yellow, black and purple, sometimes on blinding prints. Oversized shearling coats, worn smooth side out with pockets trimmed with the woolly part, appeared in over twenty guises – from classic black, sometimes worn by the male models sharing the catwalk, to printed and a particularly glamrock gold version. Seen together, this was one of those Prada collections that shows the designer’s ability to mix eras but come out with something desirable for now.

Backstage, Prada was more low key than the collection she just sent out – dressed in a demure navy skirt and jacket, with lapis lazuli earrings. She referenced “German influences and the avant garde” and particularly Werner Fassbinder’s films, like 1972’s The Bitter Tears of Petra von Kant and 1981’s Lola, that starred a young Sukowa. “I watched his films years ago,” she said. “It was time to do what was in my mind for so long.” She also elaborated on the importance of the shearling – a contrast from the mink that dominated last season. “It was about high and low,” she said. “Poor fur was the only decoration. I wanted to get a kind of humanity.”

It’s one that sells. This show comes on the back of robust financial results for the Prada Group, which also includes the other Prada-designed brand, Miu Miu, and British shoe company Church’s. In 2013, sales rose 13%, to €2.94bn, compared with €2.71bn the previous year. The Prada brand saw sales grow 11%. This is the fourth consecutive year that revenue has increased and it can be put down to the increasing global reach of Prada. It is expanding into new territories with a developing market for luxury goods. The group opened 79 stores in 2013 including, for Prada itself, four in Brazil, and one each in Istanbul and Kazakhstan. Prada now has 330 stores, and more planned for 2014. Miuccia Prada’s vision, fresh off the catwalk, provides the fuel for that expansion.

Earlier in the day other brands presented their take on Milan fashion. Maxmara’s idea had more than a hint of the UK about it – the collection was described as “anglo-Scottish”. This can be read as the Queen’s Balmoral uniform – bodywarmer and tweed – with an elegant Italian makeover. The winning silhouette was a knee-length tweed skirt worn with long chunky knit, sleek longline bodywarmer and gold Chelsea boots.

Fendi, meanwhile, went for technology over tradition. The show, overseen by creative director and iPod obsessive Karl Lagerfeld, had camera drones buzzing over the models’ heads, with live footage streamed to the house’s website.

Hi-tech antics are developing as a theme this season. Topshop Unique’s show in London had cameras on the catwalk and backstage. The footage was broadcast live in the Oxford Circus store, allowing shoppers a virtual experience of the live fashion show.