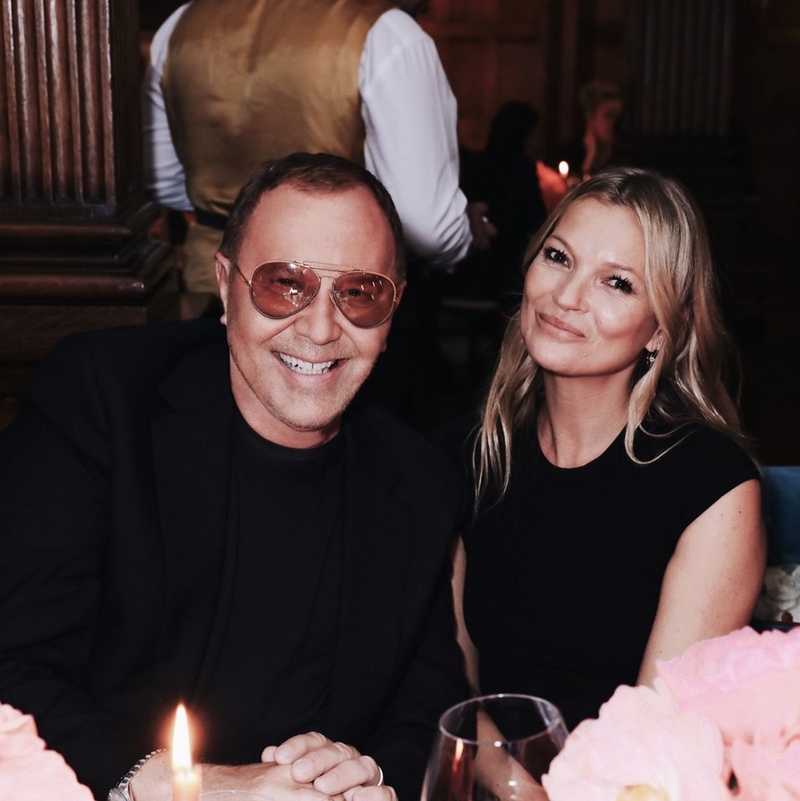 This article titled “Michael Kors: ‘The chicest women have a great sense of humour’” was written by Jess Cartner-Morley, for The Observer on Saturday 1st June 2019 14.00 UTC

It is a rainy Thursday evening in London and Michael Kors is hosting what has been billed as “just a small, low-key dinner” to celebrate the opening of his new boutique. Gemma Arterton is in black leather trousers, chatting to fellow actor Gemma Chan, who is in a floor-length gown. The River Café’s Ruth Rogers is in a dress the same hot pink as the peonies that fill the tables. Kate Moss is squished cosily between Kors and his husband Lance LePere, sipping sparkling water – she’s teetotal these days – but the Ruinart champagne is flowing for pretty much everyone else. There are platters of soft clouds of burrata, slivers of ruby-rare steak, and Jenga stacks of triple-cooked chips. And then the doors burst open to reveal a white-robed gospel choir, belting out the O Jays’ classic Love Train. Soon Moss has grabbed a tambourine and joined in, much to the amusement of passersby who are peering through the window from the sedate Mayfair street, drawn by the soaring music and enthusiastic supermodel accompaniment.

Welcome to the world of Michael Kors, a miniature universe that he takes with him wherever he goes. Next week it’s Cannes, then Capri. That’s how he rolls. It is a world where everyone has a suntan and a blow-dry, and smells amazing.

“No one ever looks more fabulous or more beautiful than at the moment they start laughing uncontrollably. It’s better than a facelift!” It is the morning after, and Kors is holding court on a midcentury sofa on the fourth floor of the Georgian townhouse which is his new flagship at the smart end of Bond Street, just across from the Ritz and Fortnum’s. The walnut coffee table is laid with white peonies, chocolate truffles, and tumblers of iced water. “People think of chic as something that’s quite serious, but it’s not true. All the chicest women I have ever known have had a great sense of humour. Like Kate [Moss]. So chic! And she loves to have fun.”

Kors, a billionaire since 2014, was born 59 years ago into a suburban family in Long Island. Glitz ran through his veins from the start. As a toddler he appeared in adverts for Lucky Charms cereal; aged five, he helped his mother design her wedding dress. (“The marriage didn’t last, but the pictures are timeless,” he has said.) The night he graduated from high school, he skipped prom and went to Studio 54 instead. “Do I remember what I was wearing? Of course I do! Two silk shirts, layered, unbuttoned to the waist. I was very skinny, I had long blond hair, I looked like Peter Frampton or Roger Daltrey. I had big Porsche sunglasses, a pair of high-waisted Ghurkha trousers, and ivory Gucci loafers. Everyone always asks, how did you get in? But I didn’t know it was so hard to get in. We were young. We just walked in. And I thought – oh, wow. I’m in Oz.”

He enrolled as a fashion student in Manhattan and took a part-time job at Lothar’s, the west 57th street boutique-of-the-moment. He sold jeans to Rudolf Nureyev, and helped Jackie Kennedy take her boots off. “It was a staggeringly fast entrée into this world that I had only read about at that point. On a Saturday afternoon I’d be helping Goldie Hawn or Diana Ross choose what to wear to go out that night.”

Four of Kors’ staff members sit in the room with us for the duration of our interview, for no reason that I can discern except perhaps that Kors is happiest with an audience. He talks in anecdotes rather than answers, playing to the gallery despite the fact that his team must, presumably, have heard most of his stories before. He is a bona fide celebrity in the US, thanks to a 10-season stint as the judge on the reality show Project Runway. For his entire 38 years in fashion Kors has mined a rich seam of glamour, staying true to joie de vivre, to an upbeat emotional tone – “That’s right,” he nods emphatically to this, “always” – while making smart enough financial decisions to be in the position he is now, with homes in London, Long Island and Florida, a favourite suite at Claridge’s, his measurements held by the Savile Row tailor Kilgour, and a position as honorary chairman of Capri Holdings, the group which owns his label as well as Versace and Jimmy Choo.

Aside from a stint at Celine in Paris from 1997 to 2003 – he said he stopped when they grounded Concorde, which I assumed was a joke, but then I checked out the dates and it fits, so who knows? – he has channelled his energy into building an American brand that sits right across the wingspan of fashion, from the £250 handbags you see every day on the tube in London to £2,500 evening gowns in sequin-embellished georgette better suited to the red carpet. He has pulled off the trick few brands manage, which is to have a name which retains prestige in the most elite circles at the same time as being available on the mass market.

“Why would anyone assume that just because a customer doesn’t have an unlimited budget, they don’t have as sophisticated an eye?” he says. “Just because you have a different lifestyle or a different budget, that doesn’t mean your taste level is different. However much money you have, you want the best thing that you can possibly have. And you deserve to be delighted by it.” That his uptown clients have remained in thrall to a name which can be purchased at a tenth of the price they pay is testament to the affection in which Kors is held. He travels endlessly, hosting lunches and shows for his customers in Miami and LA, Houston and Chicago, listening to them talk about their lives, building rapport. These days, brands call it “audience engagement”; Kors has been doing it for years.

So old-school is Kors that in the age of the spray tan, his suntan is real. “Well, in fact, this one’s a little highlighted,” he says today. “I looked in the mirror when I woke up, and I thought – oh no, the tan is fading, what am I going to do? – so I gave myself a little glow. Just to get me through to Capri, where I can jump on a rock and read a book.” But he’s restless, too. One of the reasons he loves London, aside from the shopping (“I need another lamp like I need a third eyeball, but I can’t keep away from Alfies [Antiques Market]”) is for the theatre. “There’s great experimentation here. It’s true that if it’s great it will probably come to New York at some point, but I don’t like to wait.”

The unbuttoned-to-the-naval silks of Studio 54 are long gone. These days, Kors always wears more or less what he is wearing today: black crocodile loafers, black Michael Kors jeans and T-shirt, a black Kilgour blazer. He adopted this uniform back in the 1980s, “when the travelling started. It got to the point where I had to pack a suitcase every other day. I just thought, this isn’t going to work any more. So I came up with a uniform. And I mean, we still have so much luggage! I said to Lance yesterday, how can we have so much luggage? If I still dressed the way I did when I was 20, I would need steamer trunks on a trip like this.”

The Michael Kors catwalks, once plush with fox and mink, went fur-free two years ago. But in the increasingly politicised atmosphere of American fashion, where designers such as Marc Jacobs and Tom Ford have been open about their distaste for the White House, Kors has kept his tone mild. When Melania Trump wore a £10,000 beaded Michael Kors skirt suit to her husband’s first joint address to Congress in 2017 the designer, who described dressing Michelle Obama as one of his proudest moments and championed Hillary Clinton’s presidential campaign, issued a statement that the first lady “has been a longtime client at our New York boutique. She has a keen understanding of what works best for her and her lifestyle.” In other words: Melania pays full price, in store, and is entitled to buy whatever she chooses.

“Is fashion trivial?” he muses, today. “I don’t know. I know that the world is a complicated place. But I take myself back to the fact that when I watch a man or a woman try five things on, there will be one piece that makes him or her sort of stand differently, when they look in the mirror. The attitude changes, the confidence changes. Your whole day changes.” Whatever is going on outside, the Michael Kors world is a happy place. “I believe in the magic of the right thing. And I love that fashion can give you hope.”