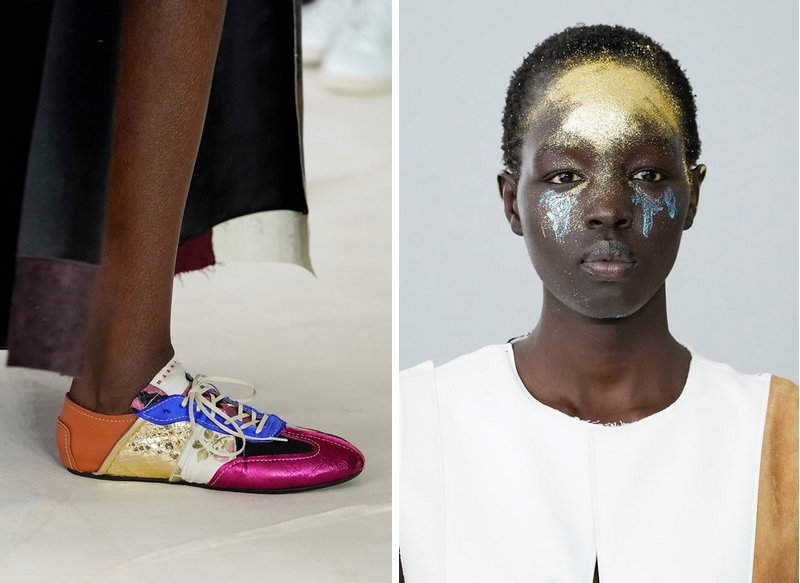 This article titled “Marni blends old and new fabrics looking for beauty in leftovers” was written by Hannah Marriott Fashion editor, for The Guardian on Friday 21st February 2020 18.29 UTC

That eccentricity has become a bankable commodity – even within the traditionally molto sexy world of Italian fashion – was proven on at Milan fashion week on Friday, when Marni’s creative director took his post-show bow wearing a giant rabbit’s head.

Nonconformity has always been part of the deal at the brand, which is famous for the jolie-laide aesthetic of thick-soled sandals, highly-patterned skirts and sculptural earrings that made it a cult hit with the gallerist/architect crowd in the late 90s and 00s. But since Francesco Risso joined the label in 2016, the direction has been more challenging still.

Despite his own very menacing Donnie Darko outfit, Risso’s collection stayed on the right side of weird this season. Its theme was patchwork and collage. Many of the clothes were familiar silhouettes – shift dresses, midi dresses and crombie coats – recreated from contrasting scraps of fabric.

There were franken-cardigans – knitted panels held together with thick, visible stitching – and dresses constructed from two separate garments: half of a white, satin bandeau dress, like a wedding gown, stitched on top of a matt black cocktail frock. There were beautiful frayed and faded sections of tapestries stitched onto dresses and fashioned into nipped-waisted, drop shouldered coats with flattened, exaggerated sleeves.

The coats were particularly gorgeous, spliced patches in warm complementary tones of bronze, caramel, black and chocolate. Anna Wintour wordlessly conferred her approval by wearing the only patchwork item from Marni’s previous collection – a coat in multiple shades of grey – as she watched from the front row.

The show’s message, said Risso backstage, was “finding beauty in the leftovers”. There was a “DIY Alice in Wonderland theme”, he said, and described creating the collection in a low-waste way, collaging “from beginning to the end” and using offcuts from one look to later make handbags, for example.

There are clear links between patchwork and sustainability, the biggest buzzword in fashion at the moment as the industry faces an environmental backlash.

Earlier on Friday, at the Tod’s show, there was a section of patchwork garments which the brand’s new creative director, Walter Chiapponi, said had been conceived because “patchwork is very sustainable”, unlike the often very wasteful standard practice of cutting patterns from large sections of cloth. This interest in patchwork also echoes the recent success of the cult US menswear brand Bode, which has received great acclaim for creating a nostalgic clothes from vintage fabrics.

Risso – who has used offcuts and recycled pieces in previous collections – was cautious about applying the word “sustainable” to his own collection, however.

”I get very itchy when I hear ‘sustainable’ words,” he said backstage. “We are trying to transform Marni much more into a conscious place where things are done in a better way.” With this particular collection, he said, parts are “recuperation” – Risso’s word for reclaimed fabric – “and parts are not, so it’s a blend.”