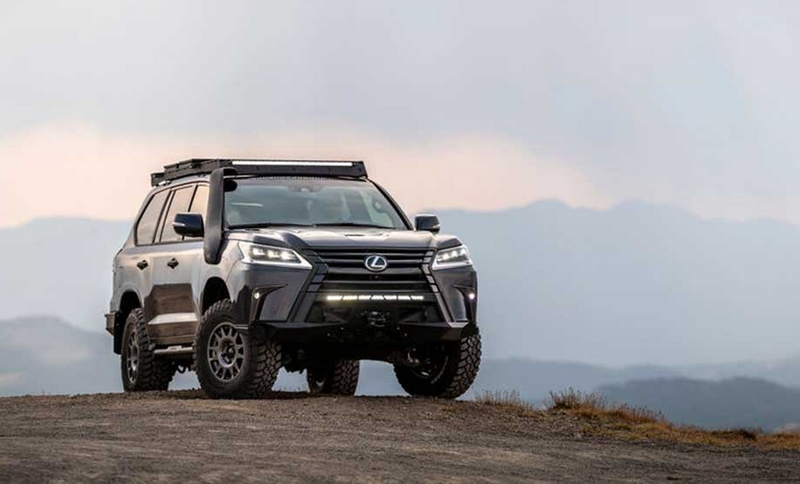 Based on the famous Toyota Land Cruiser, Lexus J201 Concept is a custom overland build done in partnership with Expedition Overland, a team of adventure travelers sharing through video, their exploration of some of the world’s most remote places.

The off-roading enthusiasts and their passion for exploration and adventure have influenced Lexus in the creation of the Lexus J201 Concept. Based on the LX 570 flagship car, J201 is a supercharged 550-horsepower, lifted, fully-equipped LX-based concept vehicle.

“It’s no secret that the Lexus LX570 can be transformed into an overlander which can make all of your friends jealous—and it makes sense, since it’s based on the Toyota Land Cruiser. Now, Lexus has created its own version of the LX570 as the ultimate adventure vehicle with the J201 concept, which features enhancements from the powertrain to the roof,” commented caranddriver.com.

The name of the new Lexus was taken directly from the LX 570’s internal Lexus chassis and platform code, URJ201, which, to offroaders around the world translates to “The Business”. 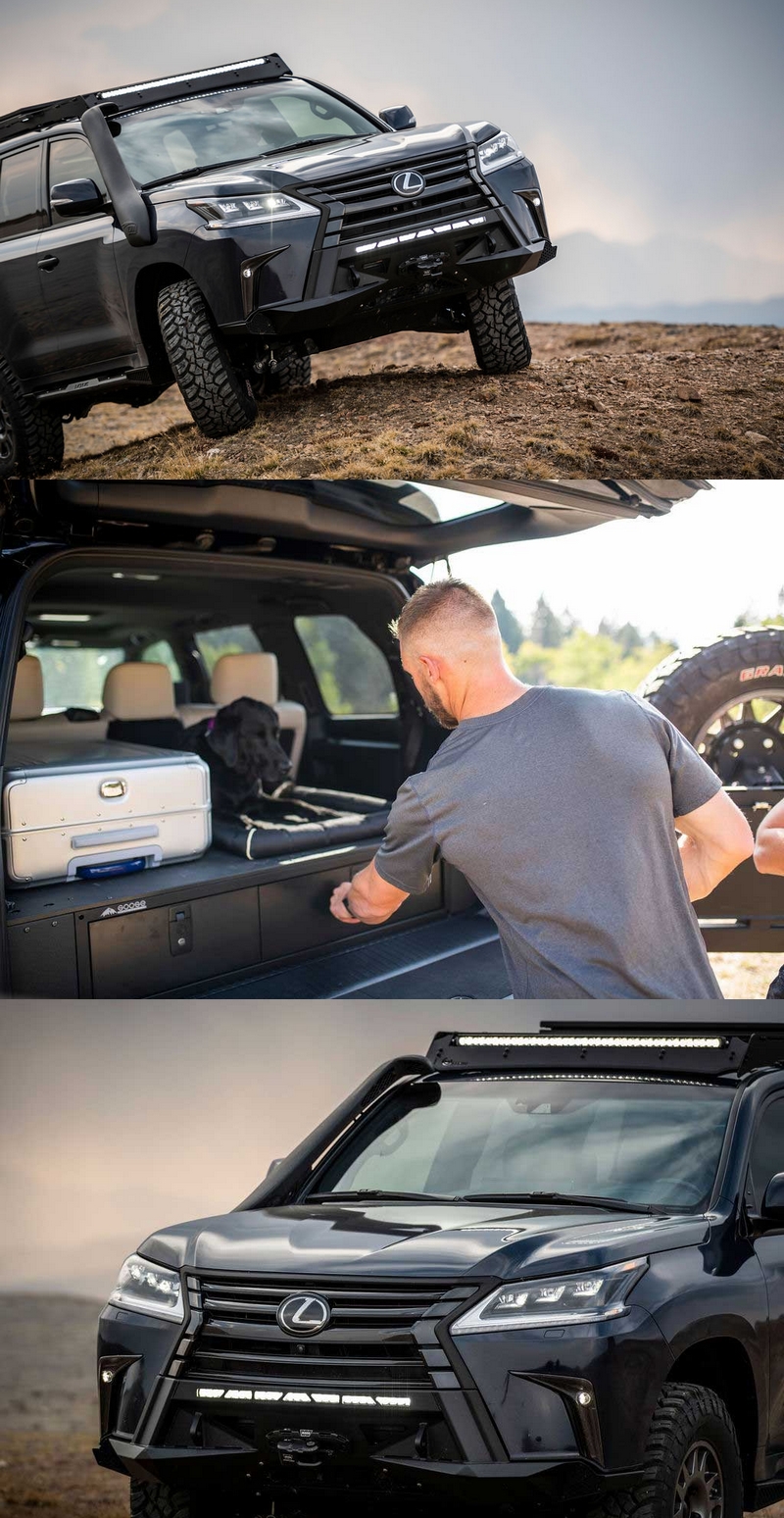 Assembled by overlanding experts, Expedition Overland, the J201 Concept anticipates the tasteful requirements and needs of the Experiential Adventurer.

According to Lexus, the Experiential Adventurers value their Lexus Flagship’s easily-accessible capability and take pride in its functional looks. They are acutely cognizant of style, expression, and reflection, yet they are drawn to understated optics. And within their social spheres, they are the consummate influencers.

When they are able, Experiential Adventurers pursue respite outdoors, well away from their daily cocoons. When these respites naturally evolve into retreats, J201 is the instrument they trust to utilize in their forging of everlasting memories.

“Normally the LX 570 doesn’t boast the kind of power the J201 produces,” wrote motortrend. “The 5.7-liter V-8 is naturally aspirated in normal models, good for 383 horsepower and 403 lb-ft of torque. It’s plenty, even at part throttle, even considering the LX’s heft. And yet, more is always welcome. The J201 features a supercharger, cranking up the output to 550 ponies and 550 lb-ft. The  supercharger is an aftermarket unit sourced from Magnuson, which can be added to the LX (or Tundra, Sequoia, or Land Cruiser with the same basic 5.7-liter V-8). Icon suspension provides up to 4.8 inches of front and 4.1 inches of rear lift.”

“The J201 is a concept, although given the heavy reliance on existing aftermarket parts there’s no reason you couldn’t build one pretty much exactly like this—if you’re willing to spend,” added motortrend.

“Lexus stylists started by chipping several slats off the SUV’s sizeable spindle-shaped grille to accommodate a winchand a light bar that’s safely tucked behind a protective cover,” commented autoblog.com. “Other aftermarket parts installed on the J201 include a snorkel, a roof rack, running boards, and a metal rear bumper with a pair of swing-outracks that carry extra fuel and a spare tire. Users can access cargo stored on the roof via a ladder installed out back.”

Battling intense competition and grueling terrain are all in a rally day’s work for defending Rebelle Rally champions, Rachelle Croft and Taylor Pawley of The X Elles. For 2020, the two Lexus drivers will field J201 during the 10-day women’s event spanning over 2000 kilometers of challenging topography and climates throughout California and Nevada. With nothing but maps, compasses, and roadbooks, Rachelle and Taylor will put J201 through the ultimate field test. 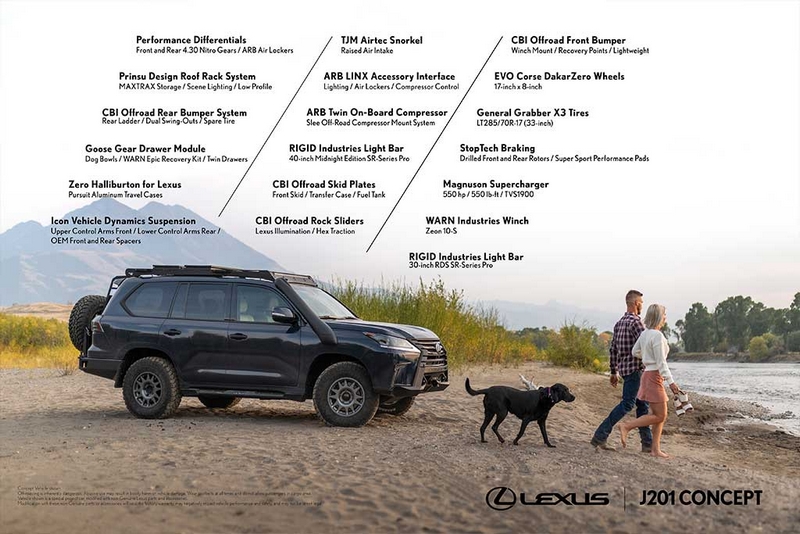 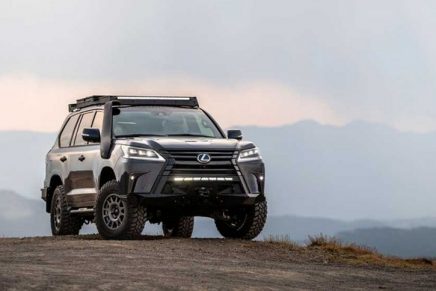 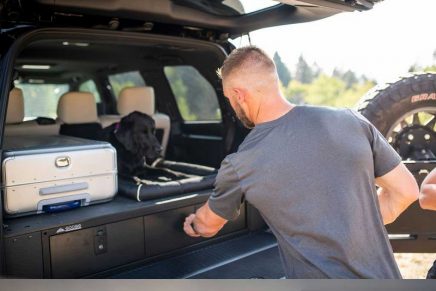 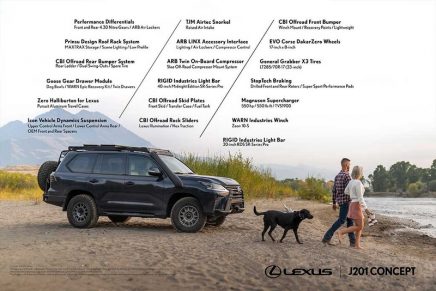 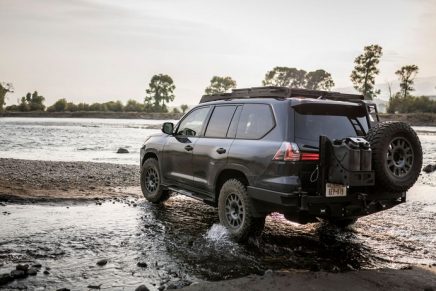