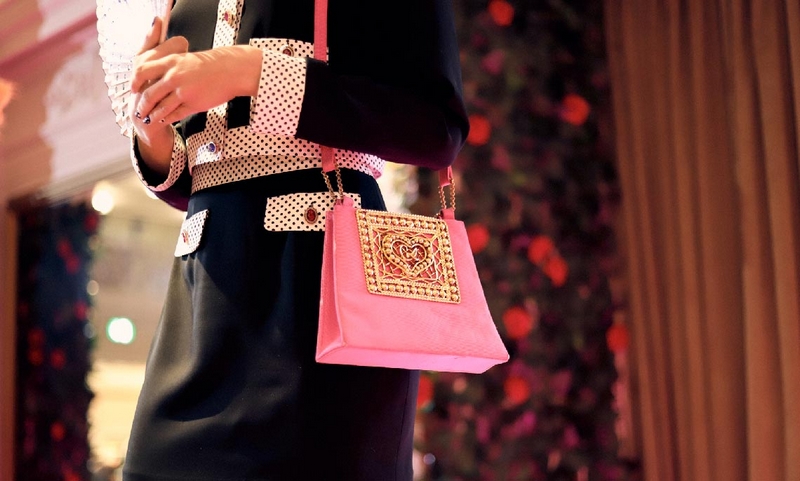 This article titled “‘It’s Lacroix, sweetie!’ Flamboyant 90s look comes roaring back for a new generation” was written by Leah Harper, for The Observer on Saturday 15th February 2020 22.05 UTC

The “Lacroix look” – theatrical frills, bejewelled jackets and flamboyant pouf skirts – defined luxury dressing in the late 1980s and early 1990s. And this weekend, with London fashion week in full swing, it seems it is well and truly back.

Most notably, it has been revived by London-based, vintage-inspired brand Rixo, which has garnered a cult Instagram following since its launch in 2015. Its capsule collection created in collaboration with the House of Christian Lacroix (THCL) was unveiled on Saturday and featured the kind of polka-dot prints and power suits that were synonymous with the label during its haute couture heyday.

Rixo’s reputation as an “It Brit” brand will no doubt introduce the look to a young, social media-savvy generation, and is likely to cement its resurgence over the coming season.

In 1987, the New York Times’ fashion critic Bernadine Morris described the Lacroix aesthetic as akin to “a costume party where everyone has a good time”. His “more is more” style was summed up by his recurring role in Absolutely Fabulous, where Edina “Eddy” Monsoon (Jennifer Saunders) would intone “Lacroix, sweetie!” as one of her tone-deaf catchphrases.

“We’ve always been obsessed with Lacroix,” says the co-founder of Rixo, Henrietta Rix. “I had some of my mum’s Lacroix costume jewellery, and we would always style our Rixo pieces with that. So when we got the email [from THCL asking to discuss a collaboration] we said: ‘Yes, 100%.’ We had creative freedom when it came to going through their archive and picking out the pieces that we loved. We’ve got stuff from the Spanish-inspired shows, as well as gorgeous checks, a classic floral print which we’ve reworked. Rixo is like a modern-day Christian Lacroix – bold pieces, where you might not think the print clashes would work, but they do.”

The capsule collection was shown alongside five Lacroix haute couture archive pieces, including a strapless tartan dress from 1992 and an asymmetrical black-and-white polka-dot “bubble” dress from 1991, in a London presentation overseen by the V&A curator Stephanie Wood.

“Aesthetically, Rixo’s approach to design is in line with the House of Christian Lacroix’s DNA,” says Nicolas Topiol, the chief executive of THCL. “[The new collection includes] polka dots, which featured in the first Lacroix collection in 1987, to more contemporary prints we have created in the last few years, to the carnation flower – which was the flower that used to be thrown at Christian at the end of every couture show.”

Lacroix himself was absent. He lost the rights to his name when he sold his fashion house to LVMH in 1987, which then sold it to its current owners, the Falic family, in 2005. Lacroix left the company in 2009 and THCL is now headed by creative director Sacha Walckhoff. Lacroix has spent the intervening years curating museum exhibitions and designing stage costumes, as well as furniture.

Topiol also confirmed that THCL was gearing up to make an independent return to womenswear – further evidence that the Lacroix look is here to stay. “I like the idea of initially doing these collaborations, working with younger up-and-coming brands,” he says. “We are definitely looking forward to having our own, standalone line in women’s fashion, but we are not in a rush.”

London fashion week is not the first time the Lacroix look has been back in the limelight. In January, THCL collaborated with sustainable denim brand Blanche for a capsule collection that merged “the clean lines and functionality of Scandinavian minimalism, with the grandeur and glamour of French maximalism” and was shown during Copenhagen fashion week.

The fashion historian Tony Glenville can see why the Lacroix look is back: “He is a superb colourist and, as we’ve seen from New York fashion week, colour is what is driving a lot of newness, rather than the clothes themselves. His clothes and accessories look ‘right’ in 2020, which they didn’t when he left fashion.

“Then it’s the optimism of Lacroix, an injection of energy, wit and drama into fashion. It’s a step beyond anything current in terms of flamboyance and statement dressing. Elements of his influence have been popping up all over.”