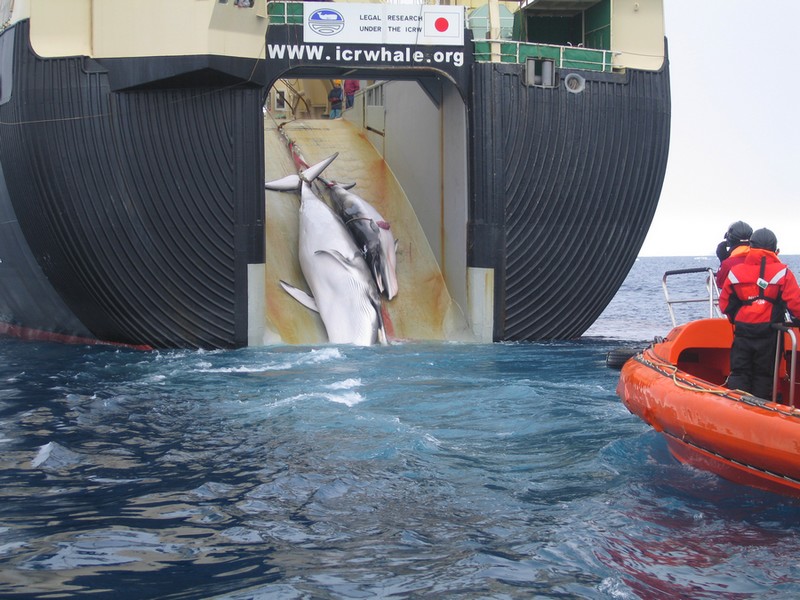 This article titled “Japanese company named as biggest online retailer of ivory and whale meat” was written by Justin McCurry in Tokyo, for The Guardian on Tuesday 18th March 2014 14.04 UTC

Rakuten, the Japanese e-commerce company which owns Play.com and Kobo, is the world’s biggest online retailer of elephant ivory and whale meat, according to conservationists.

In a report published on Tuesday, the UK-based Environmental Investigation Agency (EIA) and the Humane Society International (HSI) called on Japan’s biggest online retailer to stop selling the items.

According to the groups, Rakuten’s website carries more than 28,000 advertisements for elephant ivory and 1,200 for whale products.

Many of the whale products originated from species that have been protected since 1986 under the moratorium on commercial whaling established by the International Whaling Commission, the groups said in their Blood E-Commerce report.

The species receive the highest level of protection by the Convention on International Trade in Endangered Species of Wild Fauna and Flora, which prohibits international trade, the report said, adding: “Despite this, a number of companies were selling endangered fin whale imported from Iceland.”

Fourteen of the products did not list the names of the species used, in violation of Japanese labeling laws, it said.

“We call on Rakuten subsidiaries in the US, UK, Canada, France, Germany, Austria and elsewhere to urgently press Rakuten headquarters in Japan to ban all ads offering ivory and whale products,” said Kitty Block, vice-president of HSI.

The firm, with operating profits of US4m in 2012 and more than 10,000 employees worldwide, has expanded its international presence in recent years.

Its acquisitions include Buy.com [now Rakuten Shopping] in the US and Play.com in the UK. It owns the Canadian e-book reader Kobo and is a major shareholder in Pinterest.

The company did not respond to the Guardian’s requests for comment.

Clare Perry, head of EIA’s cetaceans campaign, said sales of whale meat and ivory cast doubt on Rakuten’s commitment to sustainability. “We are committed to promoting policies which will prevent global warming and protect the environment,” the company’s website says.

The firm’s claim that it wished to protect the environment “can only be cynical lip service as long as it banks the profits of products derived from threatened or endangered species,” she said.

Rakuten, which has expanded its online presence overseas, has so far resisted international pressure to drop the sale of products made from whale.

Japanese supermarket chains, including Ito-Yokado and Seiyu, have prohibited the sale of whale and dolphin products in thousands of stores, while Amazon and Google have stopped all sales and advertisements of whale, dolphin and ivory through their Japanese e-commerce sites.

Last May, a farm outside Tokyo agreed to stop selling luxury pet food made from endangered fin whales following a campaign by conservation groups.

Eight out of nine whale products the groups ordered through the site last year exceeded the Japanese national limit for total mercury concentration of 0.4 parts per million (ppm). One sample of pilot whale had a mercury concentration of 9.5ppm, more than 20 times higher than the Japanese regulatory limit. The average mercury level of the nine products was 4.2ppm, more than 10 times higher than the regulatory limit.

About 22,000 African elephants were killed in 2012, a rate that conservationists warn could lead to their extinction in local areas.

About 80% of tusks in Japan are used to make hanko, personal seals that are commonly used to sign documents. Other items on the Rakuten site included a large carved tusk selling for 2.94 million yen [US,186].

“Rakuten’s ads are effectively as deadly as giving bullets to elephant poachers and harpoons to whalers,” said EIA’s president, Allan Thornton. “[It] must act immediately to ban all ads selling elephant and whale products, or its global brand will be irrevocably tainted with the ongoing mass slaughter of these species.”