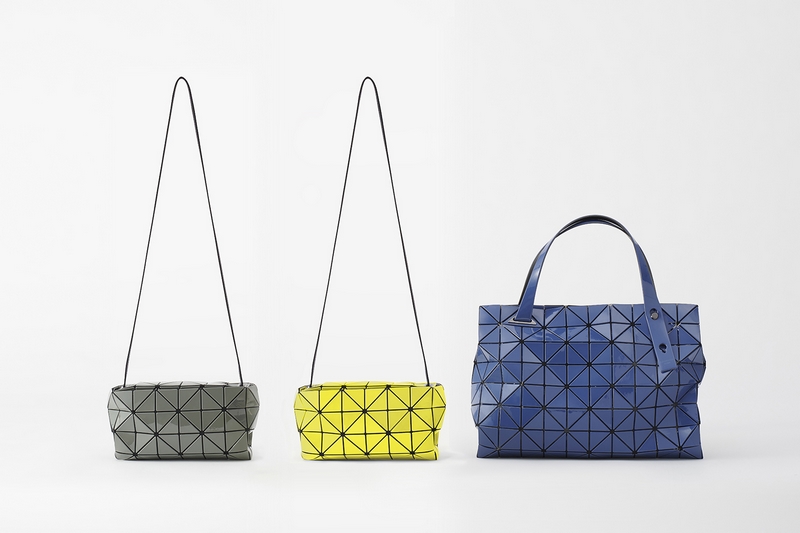 Issey Miyake has always insisted that his work is design not fashion. Throughout his career – he’s now 83 – he’s embraced craft, technology and more recently recycling. He’s worked with paper, innovative fabrics and reused bottle tops to create clothing that is unisex and sculptural. While other designers started trends or made It bags, Miyake is known as the uniform of choice for creatives. Steve Jobs’ black turtleneck was Miyake. The designer has such a close relationship to ceramicist Lucie Rie that she left him her button collection when she died. Zaha Hadid was a fan of his oeuvre: one of her favourites was a padded kimono jacket that she preferred to wear upside down. She also liked to carry a Bao Bao bag.

The Bao Bao is the school bag of the creative industries. First and foremost, it is an amazing piece of engineering. Created from a mesh fabric layered with small triangles of polyvinyl, as it’s filled with items and then meets the body it’s transformed into a myriad of shapes. When it was introduced in 2000, Miyake named it the Bilbao as a homage to the Guggenheim Museum that had opened there in 1997. That building – by Frank Gehry – became an instant architectural icon. It seemed to explode from the ground in the same way that Miyake’s clothing often appeared to take shape once put on to a human body.

The bag has gone through many tweaks, in size and form and colour, but in its 20 years, has never been swept up by the It bag hype. Not quite expensive enough (the average Bao Bao is around £300-£400) and too clever by half, though a thing of beauty it’s more brain than arm candy. The V&A’s exhibition “Bags: Inside Out” (opening September) will feature a Bao Bao Lucent Metallic Tote.

The 20th-anniversary innovation is a dramatic reduction in size. Shrunk to just 25% of its normal scale, the latest Bao Bao is a dainty miniaturisation that – luckily for Miyake – is perfectly in tune with the dramatically reduced options we’re currently living through.