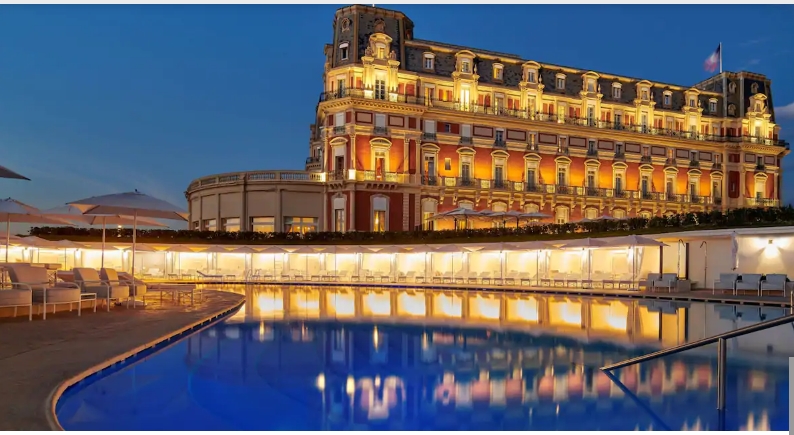 This article titled “How luxury hotels such as Biarritz’s Hôtel du Palais have helped shape history” was written by Martin Kettle, for The Guardian on Saturday 24th August 2019 05.00 UTC

Few hotels in the world can claim a more storied past than the Hôtel du Palais in Biarritz, where the G7 rich nation summiteers will sit in splendour to discuss world poverty this weekend. Guarded by hundreds of riot police, Emmanuel Macron and his guests will meet inside what the French newspaper Libération this week called their “gold bunker” – the ornate Second Empire hotel that stands on the beach at the heart of a luxury Atlantic coast resort town that is still, as Libé put it in the original Franglais, “une des capitales françaises du bling-bling”.

Boris Johnson will not be the first serving British prime minister to set foot in the hotel that was once a favourite of Napoleon III and Queen Victoria. That’s because the Hôtel du Palais occupies a special niche in British political history. It is the only building outside this country in which a prime minister has ever kissed hands and been asked to form a government. This happened in April 1908, when King Edward VII, who was a regular at the hotel, summoned the Liberal chancellor of the exchequer, Herbert Asquith, from London to succeed the terminally ill Henry Campbell-Bannerman in Downing Street.

Nothing about this episode could possibly happen today. Asquith, who lived in Cavendish Square in London’s West End, took a cab from his home after dinner and, travelling entirely alone, caught the evening boat train from Charing Cross station to Paris, continuing on to Biarritz the following day. Not a single journalist followed him or even knew he was making the trip. Once installed in the Hôtel du Palais, Asquith donned a frock coat and went to the king, who appointed him prime minister in his suite. “The weather here is vile beyond description, pouring rain and plenty of wind,” Asquith reported to his wife. He got back to London two days later. This time the press were there in force.

Although no other hotel either in Britain or elsewhere has ever hosted such an event, hotels often play a role in politics. Next month, for example, the Liberal Democrats will centre their autumn conference – if it goes ahead – in Bournemouth’s Highcliff Hotel. Few of the delegates may be aware that it was here, in May 1940, that the Labour national executive committee took the historic decision to allow party members to serve in a wartime national government under Winston Churchill. And when Labour meet in Brighton, the delegates will walk each morning past the restored Grand Hotel in which the IRA came close to murdering Margaret Thatcher in October 1984 during that year’s Conservative conference. History was changed in both.

Hotels do not only come into their own at party conferences. They host international gatherings, too, like this weekend’s in Biarritz. Probably the hotel industry’s finest diplomatic hour was when Parisian hotels were commandeered en masse for the delegates to the peace conference of 1919 – the British under David Lloyd George stayed in the five-star Majestic hotel near the Arc de Triomphe. But few hotel meetings are more famous than the one in 1944, in the Mount Washington Hotel in Bretton Woods, New Hampshire, which attempted to restructure the global financial system, and at which the UK was represented by John Maynard Keynes, who had a spectacular river and mountain view from suite 129. His wife Lydia’s ballet exercises kept the US delegation awake at night, they complained.

Hotels also provide relaxation for politicians – or used to. One of Asquith’s successors, Stanley Baldwin, regularly spent his summers at the Grand Hotel d’Albion in the French mountain spa town of Aix-les-Bains. Baldwin liked the hotel – which was long ago converted into apartments – because he enjoyed solitary hill walks and because, “Everyone knows one and they leave one alone and respect our desire for peace and quiet.” Baldwin would attempt to cut himself off from politics for several weeks at the Albion, and only followed events by reading the French newspapers over breakfast. Even so, a newsreel exists of the Baldwins sitting at a cafe in the French resort in 1923. A PM could be papped on holiday, even then, or maybe – since Baldwin looks extremely good-humoured and relaxed in the clip – it was an early piece of smart prime ministerial media management.

Some enterprising chronicler of the leisure industry should surely write a full account of the importance of hotels in political history. After all, now that the president of the United States is a hotel tycoon, and is seemingly always keen to use politics and diplomacy to advance his hotel-building business plans, the interface between hotels and politics has rarely been more relevant.

• Martin Kettle is a Guardian columnist