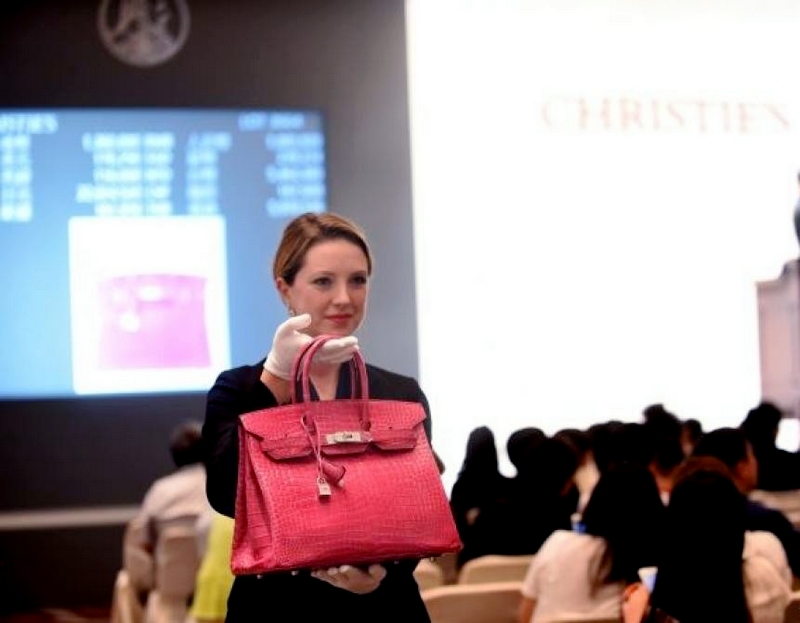 This article titled “Hermès and Jane Birkin resolve spat over crocodile handbags” was written by Angelique Chrisafis in Paris, for The Guardian on Friday 11th September 2015 17.49 UTC

In the moneyed and cut-throat world of French luxury goods, no brand dares lose a glamorous ambassador in a public spat over a handbag. So it was with relief that the fashion house Hermès announced on Friday it had patched things up with the actor and singer Jane Birkin, following a row over animal rights.

In July, Birkin had demanded Hermès remove her name from its Birkin Croco bag after learning of “cruel practices” used against crocodiles in its production. She had been moved to act after seeing a video released by People for the Ethical Treatment of Animals, showing how live reptiles were skinned or sawed open on farms that supplied luxury brands.

On Friday, however, the French leather-goods firm said it had identified an “isolated irregularity” in the slaughter process at a crocodile farm in Texas and had warned the farm it would cease any relations should it continue to neglect its recommended procedures.

Related: Jane Birkin drops request to have her name removed from Hermès handbag

“Jane Birkin has advised us that she is satisfied by the measures taken by Hermès,” the company added.

Birkin’s public takedown of Hermès over the Birkin Croco – one of the world’s most expensive and sought-after handbags – had been a fashion world embarrassment.

Birkin is still hugely popular in France, where she arrived in the 1960s as a 21-year-old, awkwardly shy, home counties English rose and shot to fame singing the 1969 heavy-breathing melody Je T’aime Moi Non Plus with her partner, Serge Gainsbourg, France’s biggest rock star, poet and provocateur.

The story of the chance invention of the Hermès Birkin bag had long been one of the cleverest marketing narratives in the luxury goods world, providing a human touch often missing from sleek leather products.

In the 1980s, so the tale goes, Birkin had been upgraded on an Air France flight and was fiddling with the contents that had fallen out of a mundane handbag, two days after her then-husband, Jacques Doillon, had reversed his car over the cherished basket she used to carry as well, “crushing it on purpose”.

When the passenger sat next to her suggested she needed a bag with pockets, she said: “The day Hermès makes one with pockets I will have that.” He turned out to be the Hermès chief executive and they came up with a design together on the back of a sick bag, in exchange for the use of her name.

Hermès prides itself on its reputation. The company is one of the world’s last high-end labels to remain independent, defiantly resisting conglomerates and what it scathingly calls “mass-market techniques”. It is still controlled by various branches of the family descended from the saddlemaker who founded the firm in 1837.

Its status and traditional production methods – each bag is made by hand in France by one artisan devoted entirely to that piece – have seen it boost sales and weather various financial crises that have shaken other parts of the luxury goods market.

The Birkin Croco – with a starting retail price of more than €20,000 (£14,700) – and its cousin, the Kelly, named after actress Grace Kelly, are among the most sought-after luxury goods in the world.

Birkin bags comes in all types of materials, from leather to ostrich skin, and Hermès produces fewer than there is demand for, creating waiting lists that have seemingly made celebrities from Victoria Beckham to the Kardashians, even keener to acquire their own and be photographed carrying one.