A metal swinging pendulum traced patterns in the sandy runway of the Gucci Fall Winter 2020 show. Circling around it, 58 looks from the men’s collection debuted, including distressed cropped knits, baggy denim pants and prints by Liberty London. T-shirt artworks from “Psychopts”, a book by Richard Hell and Christopher Wool. 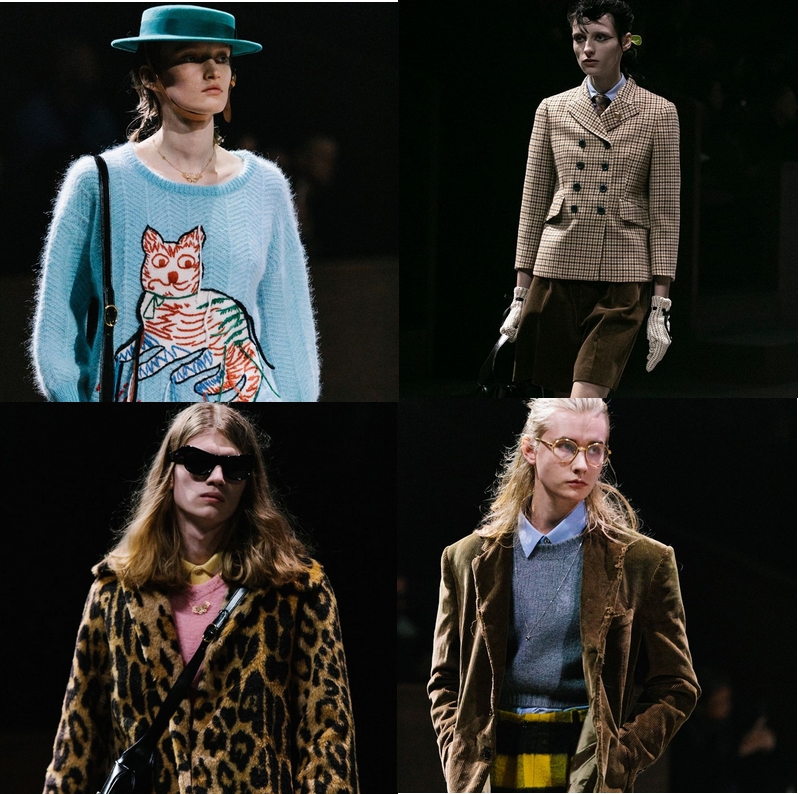 Riffing off the carefree punk spirit of Richard Hell, the babydoll dresses of Courtney Love and the freedom semaphored by Elvis’s rockabilly hair, the show exploded with energy.

The dark spectre of innocence lost hung around the show: a massive pendulum in the middle of the arena swung menacingly and the models walked around the catwalk to Marilyn Manson’s version of Sweet Dreams.

Explaining the idea for the show, Michele said: “Childhood is a free time, there are fewer labels [and] you can be yourself. When you grow up you are told ‘you can’t do that [because] you’re a boy and you’re going to primary school’.”

Michele added that he had sought inspiration for the collection by looking at children’s clothes in markets.

Another source of inspiration was the mentality of Generation Z. “Very young people are aware of what’s going on the world. They embrace change in a way I would find very difficult,” he said, name-checking Billie Eilish and Greta Thunberg.

After years of showing the women and men’s collections together, it was the first time since 2016 that Gucci showed a largely male-only show. Which goes against the trend for many fashion shows to be mixed but also illustrated the designer’s ongoing exploration of masculinity through his clothes.

“I think menswear is even more experimental and stranger [than women’s] because men are allowed less,” he told the trade magazine WWD. “The stereotype of the man is really very narrow, claustrophobic.”

The press notes for the show, which were presented on lined school notepaper, featured a treatise against toxic masculinity and a plea for a kinder, more feminised maleness. “It’s time to celebrate … a baby man able to do bold and playful somersaults … who wonders in amazement when the world becomes new.”

The show, called Rave Like You Are Five, marked the half decade anniversary of the appointment of Michele, who has had a huge influence on menswear, shifting the emphasis towards romantic flourishes and feminised, Maximilian glamour.

Michele has helped Gucci have a bigger cultural impact beyond fashion, influencing pop culture through celebrities such as Harry Styles and A$AP Rocky.

It has also become a lightning rod around issues of diversity and representation in fashion. Gucci was widely criticised for selling a blackface jumper and during a show in September a model staged a mental health protest on the catwalk after straightjackets were used in the collection.