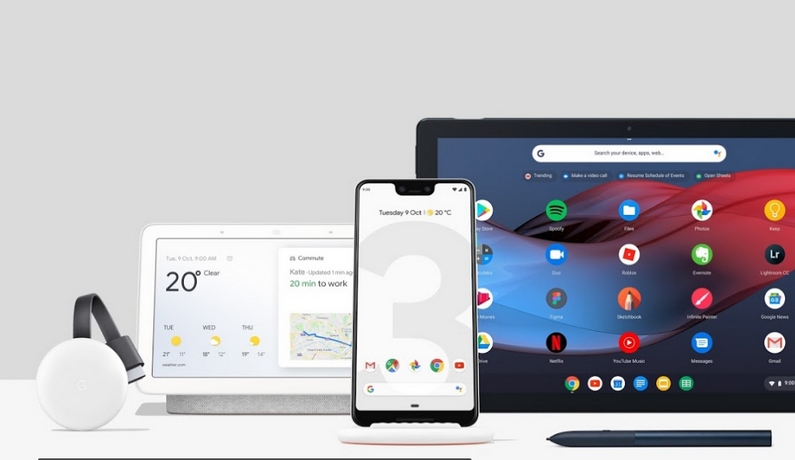 Google isn’t the first to market with smart displays. Amazon’s Echo Show put the company’s Alexa on a screen a year ago, while Google Assistant smart displays made by Harman, Lenovo and LG were released a few months ago.

But Google’s Home Hub is slightly different. Firstly, it doesn’t have a camera on it, which Google goes to great lengths to repeatedly tell you in the hope you will find it less creepy and feel more comfortable putting it in places like your bedroom. It still has a pair of microphones, of course.

The second is that it’s a lot smaller than the competition, designed to blend in rather than be a statement piece in your house.

At its most basic, the Home Hub is a 7in digital photo frame with Google Assistant built in. It works just like any other Google Home, Mini or Max, answering your questions, playing music and controlling smart-home devices, but with the added twist of visual information displayed on the touchscreen.

The screen is the best I’ve seen on a smart display thus far, being brighter, crisper and clearer than the first-generation of Amazon’s Echo Show, for instance. It’s got an ambient light sensor that, like Apple’s iPhone XS and iPad Pro line, tweaks the brightness and colour of the display to provide consistently good-looking images on screen adjusting to the light in the room.

The Ambient EQ system makes your photos look realistic in colour in varying lighting conditions, but it was a bit dim in low-level lighting for my liking. You can boost or reduce the brightness by a couple of notches in the Google Home app, but changing the brightness on Home Hub itself disables Ambient EQ. Swipe up from the bottom to access manual brightness and volume controls.

The home screen can display a choice of clock faces, images or photos from your Google Photos library. You can also ask for photos via voice, such as pictures from Portland or King’s Cross, or of people you’ve tagged in your image library. It all works very well.

When resting, the Home Hub can also display the primary user’s calendar, the weather, news stories and content from apps such as Spotify playlists, which you can swipe through with your finger and jump straight to an activity.

Google Assistant is by far the most capable of the virtual assistants at understanding and answering questions, and can hear you just as well on the smart display as Google’s Home smart speakers. Mess up a query or command and nine times out of 10 you’ll still get the right result, which can’t be said for Alexa, Microsoft’s Cortana or Apple’s Siri.

On the Home Hub answers are accompanied by visual information, such as the hourly or daily weather forecast or a photo of Jeff Goldblum as it explains he is 65 years old.

Many of these information cards are also interactive. Asking how to get to somewhere displays a map into which you can zoom with your fingers on the touchscreen. Using Google’s Voice Match recognition system the Home Hub can identify who is asking a question or giving a command and provide personalised answers. Ask for how your commute looks and it gives you your commute, not another member of your household’s. The same goes for music libraries and calendars.

Google Assistant will also ping the phone of the person who asked the question with more information for navigation options and other queries that would he helpful to look into more detail or take with you.

Recipes are really good on the Home Hub. Ask how to make beef bourguignon and the screen will display a selection of recipes from the web. Selecting one shows you the recipe, from which you can tap to start cooking and get step-by-step instructions read out and displayed on screen one at a time. Progress through the recipe by tapping or asking for the next step, or jump back one to view the whole thing. It’s well designed and easy to use.

Google Assistant has a bunch of routines you can trigger with voice commands. By default saying “good morning” will show the weather, your commute, what’s on your calendar and show any reminders, then it’ll play your choice of news sources, music, radio, podcasts or audiobook. It can even switch on lights and other smart home devices.

You can set up routines to do lots of different things and tie them to your own custom phrases. You need to invest a bit of time to figure out what you want to do, but it’s a really powerful system worth trying out.

Having started slowly with third-party smart home device integration, Google can now control almost any smart home device, from lights, to cameras, thermostats and even locks, with notable exceptions being Amazon’s Ring and Sonos speakers.

Recently Google turned its Home app into a one-stop-shop for controlling connected devices. The Home Hub takes that easy all-in-one control station to the next level.

Swipe down from the top to reveal a panel with all your Google Assistant connected smart home devices. From there you can turn on lights and adjust their brightness and colours, see cameras, adjust the temperature or do anything else from an easy to use command and control screen. There’s even a button to turn it all off, right from the screen.

Expensive, custom installation smart homes have had this kind of touchscreen dashboard system for a while, but it’s been difficult to achieve with off-the-shelf kit until now. Voice control is great, but when you’re trying to do lots of things at once and see the status of devices, touchscreen buttons are better.

Google’s recent push into digital wellbeing extends to the Home Hub. You can set scheduled downtime blocking responses from Assistant as well as music and video on the display, while leaving alarms and timers accessible.

Filters can also restrict YouTube to certain content, such as that included in YouTube Kids, or block it entirely. They can also block explicit music tracks or all music, block voice calls, restrict Assistant’s answers to basic things like the weather and block third-party app actions except for those specifically designed for families.

These filters can be applied wholesale on the device or only for supervised accounts or guests, so if you don’t want your kids watching YouTube you can block access to it.

The Home Hub sounds somewhere between the Google Home and the Home Mini for music. It can get pretty loud and clear, but lacks any real bass and sounds pretty shrill at 100% volume, meaning this isn’t a smart speaker to buy for rocking out.

It does a great job of rendering the Assistant’s voice, and works perfectly well for watching YouTube videos and news broadcasts. But it doesn’t really compare to the audio you get from Amazon’s first-generation Echo Show.

The Google Home Hub costs £139 and is available in grey, black, turquoise or pink.

The Google Home Hub is arguably the best smart display on the market. It’s much smaller than you might expect, with a really good-looking 7in screen that appears to be mounted into a small fabric cushion that’s only visible at the bottom.

It’s a simple, understated design that blends in well with furnishings, and would be as at home on a book case or mantle piece as on a table or work surface side. The lack of a camera is probably a plus point for those, like me, who will never video call anyone, and you can still do things on the touchscreen with the mic muted.

Recipes are particularly good on the Home Hub, while the added one-touch smart home control, status and camera display is brilliant. It’s not a great music speaker for the money though and the fabric surface is going to be more difficult to keep clean in a kitchen.

But the Home Hub is cheaper than most of the competition and gets much more than just the basics right. If you swim in Google’s ecosystem, this is the smart display for you.

Cons: no 3.5mm socket, fabric could get dirty in a kitchen, need to dig into the Google Home app to change almost any setting, only Google services