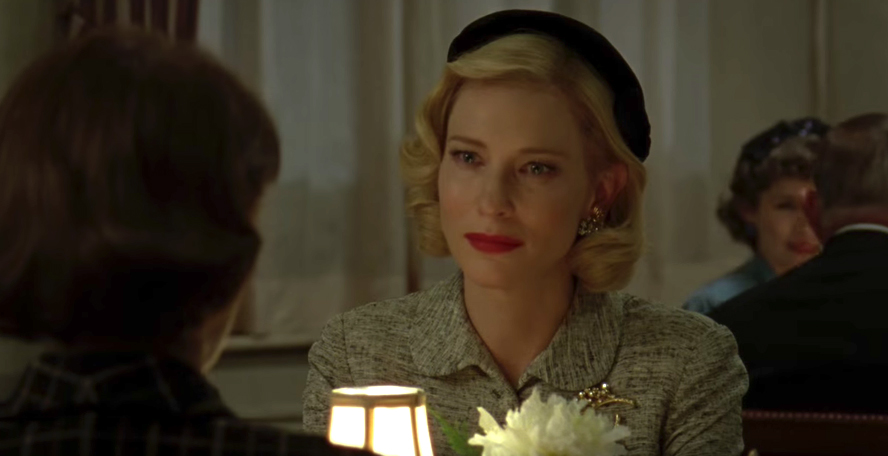 This article titled “Golden Globes nominations 2016: will it be a Blanchett-DiCaprio one-two?” was written by Peter Bradshaw, for theguardian.com on Thursday 10th December 2015 15.43 UTC

This year’s Globes are offering a widely anticipated race between yin and yang. The creamily sensuous Carol, Todd Haynes’s 1950s-set story of a love affair between an older and younger woman, played by Cate Blanchett and Rooney Mara, is in the race for best picture (drama) and Blanchett and Rooney both have acting nods. That’s alongside a very male film, Alejandro González Iñárittu’s The Revenant, with Leonardo DiCaprio’s 1820s mountain man obsessively tracking down the two men who left him for dead after he was mauled by a bear — and DiCaprio has a nomination.

Peering ahead to the Academy awards, I am seeing Cate Blanchett, already a double-Oscar winner, pictured next to Oscar neophyte Leonardo DiCaprio, both holding up their statuettes.

Elsewhere, in the Globes’ best picture (drama) list, there is the quasi-Fritzl drama Room, and also the rather worthy and for my money rather overvalued Spotlight, the story of investigative journalists tackling the issue of paedophilia in the Catholic church.

Rather surprisingly, the best picture (drama) list has no room for Steven Spielberg’s superlative Bridge of Spies but has included the hectically hyperactive and wildly silly Mad Max: Fury Road. Mad Max’s director George Miller even gets a nod in the Director heading — and in this category too Steven Spielberg gets zilch. I’m all for some contrarianism and the Globes are renowned for rewarding the sunnier and popular movies that traditionally get crowded in awards seasons, but Bridge of Spies looks like the big snub, with nothing for Tom Hanks, although Mark Rylance gets a best supporting actor nod.

Considering that Steve Jobs was considered to have tanked most royally at the box office, it is reassuring that this very good film has featured so prominently in this year’s Globes list, with acting nominations for Michael Fassbender and also Kate Winslet for her witty supporting turn as Jobs’s marketing manager. Aaron Sorkin gets a screenwriting nomination for Jobs, alongside Quentin Tarantino for his western The Hateful Eight.

In best picture (musical or comedy) category, Ridley Scott’s amiable sci-fi adventure The Martian gets a listing (although I thought it more serious) along with the financial crisis dramedy The Big Short (which has a total of four nominations) and also David O Russell’s deadpan-subdued Joy — about the invention of a bestselling miracle mop. I found Joy disappointing and tonally mismanaged, compared to his stylish American Hustle, although Jennifer Lawrence is certainly a commanding presence and is duly rewarded with her nomination.

In this categeory there is also Amy Schumer’s comedy Trainwreck about the hard-drinking singleton finding love; Schumer also gets a nomination in best actress (musical or comedy). The Globes are going to be a huge night for Schumer, all but unknown in the movies until so recently. For what it’s worth, I personally would also have included in this category Sisters, the unpretentious comedy starring Tina Fey and Amy Poehler, ahead of Spy, Melissa McCarthy’s espionage romp.

As far as acting goes, the Globes are a triumph for Alicia Vikander, who gets a double with best actress (drama) for The Danish Girl and best supporting actress for her turn as the mysterious AI robot in Ex Machina — it’s a stylish performance for which she might well win. Maggie Smith is up for best actress (musical or comedy) for The Lady In The Van: a big name made even bigger in the US due to Harry Potter and Downton. She is up against Lawrence, Schumer, Lily Tomlin for Grandma and Melissa McCarthy for Spy. It could be Maggie Smith’s year.

As far as serious acting goes, the Globe (as well as the Oscar and everything else) surely has to go to Saoirse Ronan for her wonderful lead performance in Brooklyn: a superb example of screen acting. It’ll be a disappointment if it doesn’t go to Ronan.

One of the most striking things about this year’s Golden Globes nomination list is that two of the year’s most successful films are duking it out in the best animation category: Inside Out, the dizzying drama of a girl’s inner mental world versus Anomalisa, Charlie Kaufman’s extraordinary stop-motion study of a psychological breakdown. The other contenders are The Good Dinosaur, Shaun the Sheep Movie and Snoopy and Charlie Brown: The Peanuts Movie — all perfectly plausible candidates in their way, but surely outclassed by those two frontrunners. Anomalisa actually has a very powerful claim to be the year’s best film, full stop.

So this year the Globes’ big successes look like coming from Carol, The Revenant, Brooklyn, The Martian, Spotlight and The Big Short, and I predict a headline win for DiCaprio/Blanchett.