The XXII Triennale di Milano comprises a selection of circa 100 projects from the last three decades, examples of restorative design, architecture, and art from all over the world. Among them, Broken Nature includes new installations and objects. 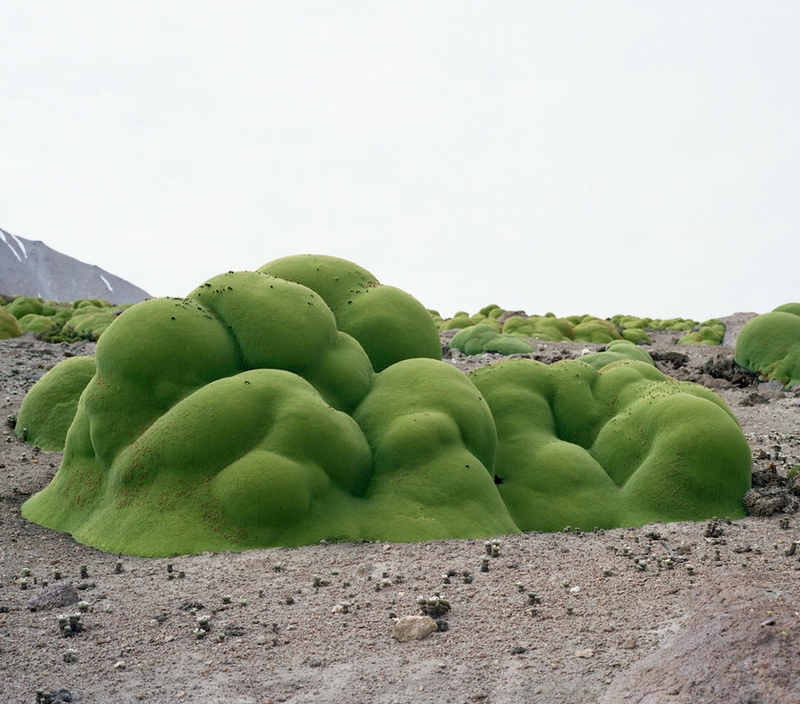 Llareta #0308-2B31 (Up to 3,000 years old ; Atacama Desert, Chile), from The Oldest Living Things in the World by Rachel Sussman; image: triennale.org/en/events/broken-nature/

This article titled “From space boots to life as a goat, Milan Triennale takes on apocalypse” was written by Oliver Wainwright, for theguardian.com on Monday 4th March 2019 16.07 UTC

“We will become extinct,” said the show’s curator, Paola Antonelli, with the calm smile of someone who has already accepted our imminent armageddon. “That much is certain. But with this exhibition, I’m promoting the idea of designing a better ending. How can we leave a more adequate legacy, so that the next dominating species will not think of us as total morons?”

It’s probably too late. We have drilled, mined and burned the bounties of the planet, and flushed the byproducts back into the ecosystem, gradually asphyxiating ourselves and everything around us in the process. But Antonelli’s show isn’t the self-flagellating doom-fest you might expect. Nor is it a naively optimistic manifesto for how to fix the mess. It is a nuanced, witty and thoughtful take on where we are now, and what the future might hold.

It is a fittingly portentous topic for the grand reboot of the Triennale, an institution that began in the 1920s, and staged several landmark editions throughout the 20th century, but which fizzled out in the 1990s. Now under the chairmanship of the ambitious Milanese architect, editor and sometime politician, Stefano Boeri, it is back with a bang. Housed in the elegant 1933 Palazzo dell’Arte in Sempione Park, the Triennale will open a permanent display and archive in spring, and continue its lively programme of performing arts, but it is the triennial exhibition on which all eyes are focused. Does the 22nd edition live up to the times when Giorgio de Chirico, Frank Lloyd Wright, Picasso and Le Corbusier exhibited here, and the postwar era when the Triennale had the power to see a whole neighbourhood constructed?

For one, the mood is different. While past exhibitions showcased proposals for the future of education, urban reconstruction and leisure, offering confident, assertive plans for a new way forward, this edition strikes a more critical, uncertain tone. Exhibitions of architecture and design have increasingly shifted from the realms of proposition and problem-solving to observation and speculation – a move Antonelli has been in part responsible for, in her role as curator at MoMA in New York for the last 25 years. Her conception of design leans more towards asking questions than offering practical solutions.

What does it mean to live as a goat? How did a now extinct flower smell? Can you infuse a building with melanin? These are some of the more curious inquiries that have occupied some of the artist-designers in the Triennale exhibition, whose symbolic artefacts and videos are displayed alongside real-world designs that are actually in production. It is a blurring of the real and fictional that can be frustrating for the visitor: have scientists managed to grow a space boot on a mission to Mars, using an astronaut’s sweat and fungal mycelium, or is this another sci-fi dream? (The latter, for now.)

If the right side of your brain wants to indulge in speculative fantasy, while the left wants hard facts, then this is generally a show to suspend disbelief and let the right side take over. That way you can imagine that the lumps of rock in one vitrine, embedded with plastic rope and crushed metal cans, are indeed “future fossils” from our Anthropocene era, or that people might one day wear high heels that plant restorative seeds in the post-nuclear landscapes of Fukushima – as a poetic project by British-Japanese performance artist Sputniko! imagines.

Patience might wear thin with projects such as Ore Streams, by Formafantasma, which takes a worthy topic but does it a disservice with a banal punchline. By 2080, say the designers, the biggest metal reserves will be above ground, in the form of consumer electronic waste. But their research into planned obsolescence and recycling has inexplicably led them to produce a range of luxury aluminium office furniture, decorated with computer parts.

“The furniture acts as a Trojan horse,” insists Antonelli. “Many visitors switch off when they hear the word ‘sustainability’, because they think of grey felt and confetti plastics. Especially in Italy, you need to show a piece of beautiful furniture to break down the barrier.” They should have had more faith in their audience: this isn’t the Milan furniture fair.

Some down-to-earth relief comes in the form of projects that are having an impact in tackling urgent environmental and social predicaments. A section on women’s health includes the Lia biodegradable pregnancy test alongside Thinx period-proof underwear and the Janma clean birth kit – a $2 set of tools to ensure safe deliveries in India. Nearby is the Hippo Roller, designed to facilitate the transport of large quantities of water in remote African regions in the form of a container that can simply be rolled along the ground. There are also some of the ingenious solutions that have come out of Fixperts, an initiative that pairs designers with people in need of help, which includes tools to aid a paralysed person read the newspaper and an arthrosis sufferer to button her shirt.

A section on waste and the circular economy ranges from ceramics made from discarded food, to Lego’s “plants made from plants” range (model trees and shrubs made from sugarcane plastic), and speculations on how animal leftovers might be used. Swedish designer Victor Alge notes that around 80,000 elks are hunted each year in Sweden, yet only 55% of the animals’ body weight is edible meat. His solution? Objects made from “moose parchment”. “If an animal is shot dead,” he writes, “then the minimum respect it is owed is not to throw nearly half of it away”. Another arresting project traces the 185 different products that a single pig is used for – from toothpaste to train brakes – asking, in which case, can anyone truly be vegan?

The breadth and sophistication of the Broken Nature exhibition is thrown into sharp relief by the various other elements of the Triennale, including a number of mostly missable international contributions and a laboured foray into the importance of the vegetal kingdom, titled The Nation of Plants. As is often the case with an event that’s affiliated to the Bureau International des Expositions (the intergovernmental organisation in charge of World Expos), many of the results are a deathly cocktail of bureaucratic design-by-committee, the few moments of interest not worth the traipse through the garbage. Highlights include Russia’s ruminations on the Moscow River, Lebanon’s reforestation project, Cuba’s celebration of the Havana Art Schools, and the UK’s mapping of Islamic State’s destruction of Yazidi communities in Iraq by Forensic Architecture, while the prize for Instagrammability goes to the Netherlands, for a machine that allows you to shrink-wrap yourself on a bed.

When you’ve had enough of the Eurovision muddle, there’s no better place to decompress than in The Great Animal Orchestra, a collaboration between American musician Bernie Krause and British group United Visual Artists. The immersive work takes Krause’s 50 years of field recordings, from the depths of the Amazon to the Yukon delta, and visualises his soundscapes with a scrolling spectrogram projected around the room. Lie back and be serenaded by the creaking of the southern tree hyrax, the trumpeting of the African forest elephant and the call of the red-chested cuckoo – a rich cacophony of nature that’s increasingly on the brink.