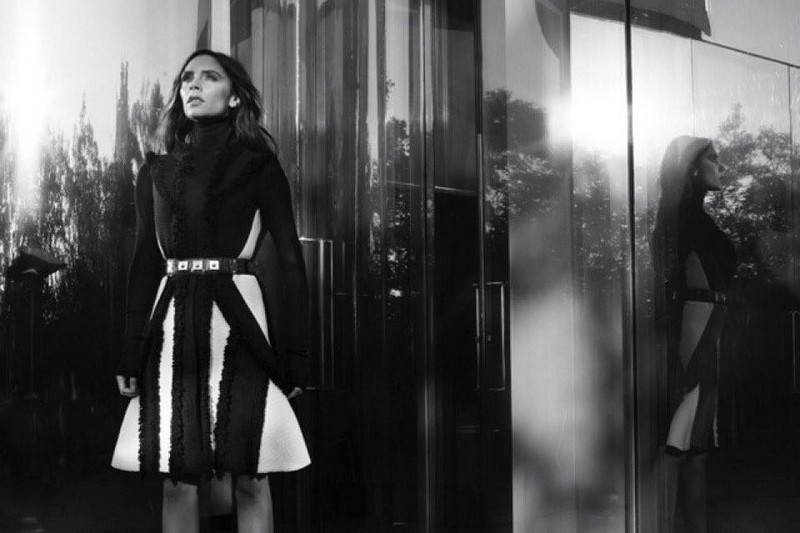 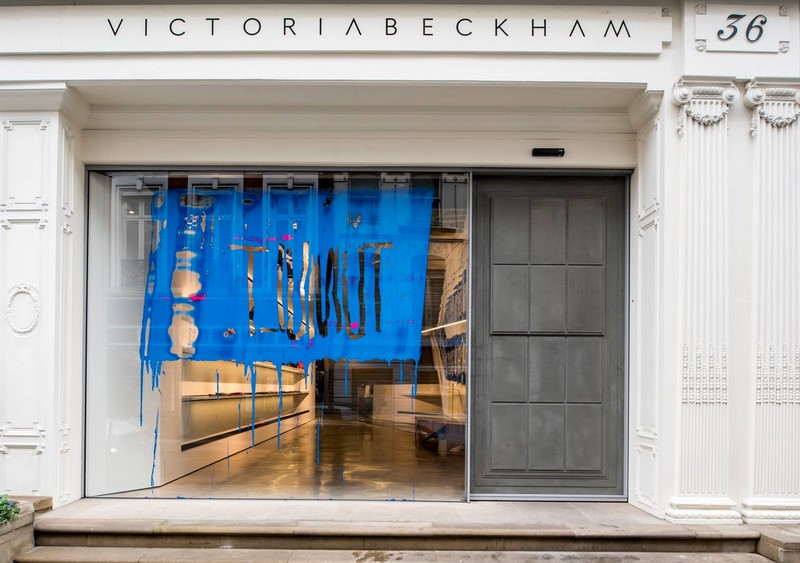 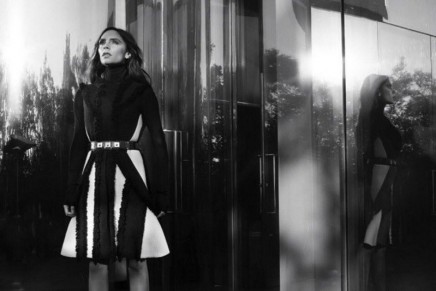 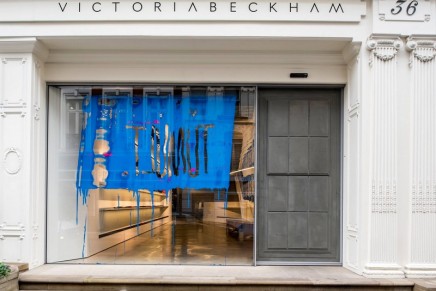 This article titled “From Posh to classy: how Victoria Beckham won over fashion world” was written by Emine Saner, for theguardian.com on Friday 20th November 2015 13.58 UTC

The feeling of scepticism was palpable, according to one of the editors gathered in a suite of the Waldorf hotel in New York one September day in 2008. Victoria Beckham was about to launch her first collection and the world’s fashion press had prepared themselves for a celebrity vanity project from a former pop star with no formal training, whose personal style had, until recently, been notable for skimpy clothing and fake tan.

But Beckham’s collection of 10 dresses, shown in this low-key way was, says Sarah Bailey, editor of Red who was then deputy editor of US Harper’s Bazaar, “an extraordinary presentation, [and she] was very sweetly nervous and humble. She talked through this collection of dresses with such incredible conviction and you could almost feel hearts and minds being melted as we were sitting there. The progress from there has been meticulous and impressive.”

Those first reviews were glowing, but couldn’t contain their surprise. “The woman formerly known as Posh Spice has launched a dress collection, and, believe it or not, it’s one of the hottest things going in New York this week,” said Vogue, while the Times said: “In fact – and I can’t quite believe I’m writing this – it was a very impressive, accomplished collection, with not a single dud.”

Since then Beckham has been embraced by the hard-to-impress fashion world. Reviews for her latest collection were overwhelmingly positive. “Victoria Beckham surfed into the big league with a colourful, classy and adult collection,” wrote Suzy Menkes in Vogue. “It eradicated once and for all the Spice Girl tag – or any idea that she is not a full-on designer.”

Beckham’s label was named best brand in 2011 and 2014 at the British fashion awards, but this year she is up for the big prize at those awards – best womenswear. Up against industry heavyweights Christopher Kane and JW Anderson, if she wins on Monday night, Beckham will have consolidated her transformation from overexposed paparazzi fodder to respected fashion designer and businesswoman.

It has been a triumphant second act – after the blazing years of her Posh Spice persona and a failed attempt at a solo career, she had become better known as David Beckham’s wife, photographed endlessly, famous for being famous. But Victoria Beckham is nothing if not determined.

This was always obvious from the beginning, as if she can turn a dream into reality through sheer force of will – and graft. After answering an advert in the Stage for an audition for a new girl band, Beckham joined the Spice Girls. They would go on to be one of the most successful bands of the 1990s. She has said she knows she is not the best singer or dancer or possessor of supermodel looks, but that she has always worked hard and made the best of what she has.

“When I was at school, I was never naturally the brightest of students,” she said in an interview last year. “Then I went to theatre college and I was never the most talented. I have always had to work … I’m not sitting back and waiting for things to come to me: I will go out and get it.”

“It’s always been very much about her vision,” says the fashion designer Antonio Berardi, who has known Beckham for years (he designed those memorable matching purple outfits the Beckhams wore at their wedding). If she wasn’t an entirely natural pop star, she appears to be a natural designer, I suggest. “This is her voice in its pure form right now,” says Berardi, “and I think it just goes to show how good it is.”

In the Spice Girls, Victoria was the supposedly classy one, with her black dresses and sleek bob. Being Posh Spice helped her later career, says John Illsley, a valuation director for the brand valuation company Intangible Business. “She was always positioned within the Spice Girls as the one who was more stylishly dressed, and the image that she was allowed to portray in the group was one which more suited a move into a fashion-based brand than perhaps the other four.”

Her marriage to David Beckham helped by keeping her in the public eye even as her singing career waned, although the idea that she was grasping on to her husband’s fame is unfair: Victoria was an integral part of the appeal of Brand Beckham and increased her husband’s status just as much as he helped hers. “She’s in pop and David got another image,” Alex Ferguson, Manchester United’s longterm manager, once complained. “He’s developed this fashion thing. I saw his transition to a different person.”

When they first got together, says Illsley, they both looked like almost any other twentysomething couple, but to see them now as “both such iconic figures is an incredible piece of brand management”.

At first, like a lot of celebrities, Beckham’s fashion career started with design partnerships that seemed more about her name than the products. She designed sunglasses, jeans and put her name to perfume. Sarah Bailey, who has interviewed Beckham several times, remembers going to the couple’s estate in Hertfordshire during this time, around 2006. “Her passion was quite evident. She had recruited a young woman from her local hairdressers to be her fit model. She was obsessively fitting the denim on this woman. It was notable how keen she was to get this right, and her seriousness.”

Beckham had essentially licensed her name to other brands, and had learned a lot about the industry, but by 2008 she was ready to go it alone. She wasn’t exactly a struggling designer straight out of Central St Martins – the label was established with the Beckham millions, and backed with not just financial investment from their manager, Simon Fuller (he owns a third of the company), but also vital structure. Fuller gave her Zach Duane, lawyer and his vice-president of business development, to be the fledgling label’s chief executive. Melanie Clark, who had worked for the designer Roland Mouret – also backed by Fuller – became Beckham’s head designer.

She now employs a team of 150, and has always been open about the way she works, given her lack of training. “I can draw, but badly,” she has said. “I think that’s OK. No one’s expecting me to do it the normal way.” Other members of her team may be drawing and pattern cutting, but she insists the vision is hers. “When I’m starting work on the collection, I just sit with my team and talk to them about what I like, what I find inspiring, what I’m desiring, what I want to wear, what I haven’t done before.”

Lucy Yeomans, editor-in-chief of Porter magazine, also remembers the first presentation of Beckham’s collection. “What was most impressive from the word go was the way she tackled it. It would have been so easy for her to have capitalised on her celebrity and had a big show and filled the front row with famous friends, and she actually did it in an intelligent, low-key way. I don’t even think David or the family went to any of [her later catwalk] shows until much further down the line. She went in quite humbly: ‘I’m just starting out, this is what I’m doing’.”

Jim Gold, president and chief merchandising officer of upmarket US department store Neiman Marcus, admits to initial worries about stocking the collection. “We had our reservations when we first met with Victoria,” he says. “Over time, we had met with numerous celebrities aspiring to break their way into the fashion industry, but only a select few seemed willing to commit the time and energy required to build a brand that could stand the test of time. Victoria has been an exception and a shining example of what it takes to succeed in our industry.”

She has evolved as a designer relatively quickly, says Yeomans. “Her more recent collections are very modern and feel like they sit in that fashion world rather than just being a dress collection. She’s softened the silhouettes.” Victoria Beckham is one of the 25 bestselling brands on Net-a-Porter, the designer fashion online retailer, Yeomans says. And the clothes are not cheap: a simple silk top is £750, dresses are over £1,000 and coats are upwards of £2,000 (she also has a lower-priced label, Victoria).

“People can see her seriousness, and real women who have the money are very happy to buy those clothes,” says Bailey. “They don’t do it because they’re turned on by celebrities – they do it because those clothes are amazing staple pieces to have in your wardrobe if you’re lucky enough to afford them.”

Last year, Management Today named Beckham top of its list of 100 entrepreneurs, pointing out her turnover had grown from £1m to £30m in just five years.

In person, says Bailey, Beckham is very different from the unsmiling, sullen woman often associated with her public image. “I think she is often misunderstood. She is incredibly funny, witty and has an understanding of how she has been perceived over the years. I have noticed her confidence increase around this fashion conversation over the years, and she has won people over. There is a modesty about her that is appealing.”

At the end of her last show in September during New York fashion week, after showing a collection of loose, breezy pieces that felt fresh and modern, Beckham came out – only briefly – to take her applause, and she looked almost bashful. “First time around I felt famous,” she said last year. “But now I feel successful.”

Career: She auditioned for a new girl band in 1994. The Spice Girls’ first single, Wannabe, went to number one in dozens of countries, and the band went on to sell more than 50m records. As a solo artist, she had four top 10 singles, but disappointing album sales. Beckham designed jeans and sunglasses for other brands, then launched her own denim label in 2006. She unveiled her first high-end womenswear collection in September 2008, with a lower-priced line following in 2011. In 2014, she opened her flagship store in London.

High point: Becoming one of the biggest pop stars in the world with the Spice Girls. Rave reviews for her debut fashion collection and winning her first British Fashion award in 2011

Low point: Beckham’s first solo album failed to sell, and her next two albums were not released. Weathering rumours about marriage difficulties.

They say: “She sold 80m records, she has a stunning husband and beautiful children, and she has had real success in her career as a designer. And she’s very sweet and very funny. She can look cold, but she is not, she’s cheerful.” Karl Lagerfeld

She says: “I always wanted to be a fashion designer. Then along came the Spice Girls which opened a lot of doors for me. And, let’s be honest, closed a lot. But those days are over. I was never going to be the world’s best singer, but I hope I can be a good designer.”