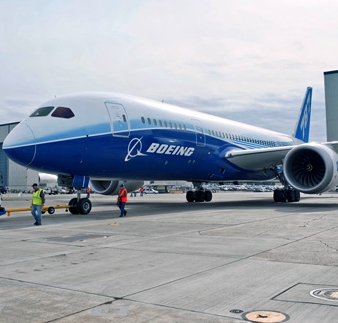 Boeing’s new mid-size passenger airplane, the 787 Dreamliner, touched down for the Singapore Airshow. The airplane will be on static display Feb. 14 -17.

The Dreamliner demonstrated its long-range capabilities a few days ago, flying nonstop from Seattle’s Boeing Field to Bangkok’s Suvarnabhumi International Airport — a distance of 7,679 miles (12,358 km). The 787 has garnered more than 800 orders from airlines around the globe.

Singapore Airlines has 20 of the higher capacity 787-9s on order.

Made from lighter composite materials, the 787 is the first mid-size passenger airplane capable of flying nonstop to many more distant cities without having to go through a hub airport. That capability for a mid-size jet pleases not only passengers who would no longer need to detour to a hub airport, but also airlines who can establish long-haul routes previously served only by jumbo jets requiring many more passengers to be profitable.

The Dreamliner is in the midst of a six-month Dream Tour taking it around the world so aviation enthusiasts can experience the revolutionary jet first hand. The Dream Tour airplane, test plane ZA003, is outfitted with the 787’s special cabin features including a welcoming entryway, dramatically larger dimmable windows, bigger bins and dynamic LED lighting. The airplane is
configured with a luxurious business-class cabin, an overhead crew rest compartment and an economy class section.