Spanning 1947 to the present day, Christian Dior: Designer of Dreams exhibition at V&A museum in London, UK, traces the history and impact of one of the 20th century’s most influential couturiers, exploring the enduring influence of the fashion house, and Dior’s relationship with Britain. 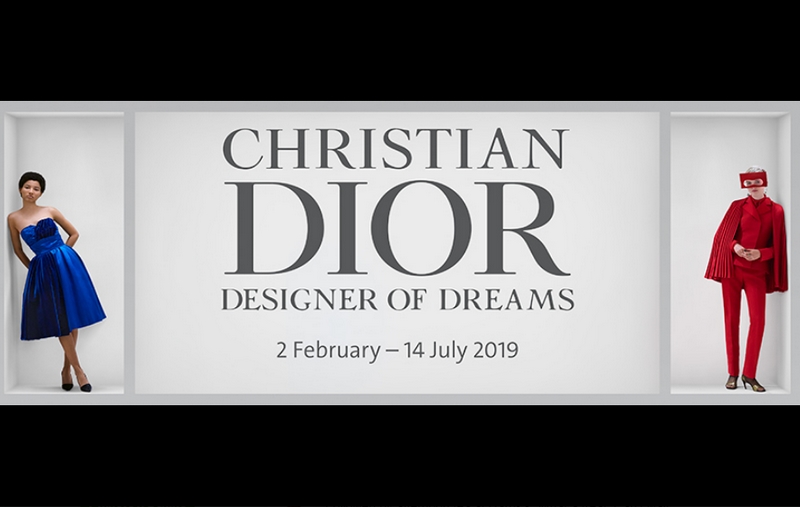 This article titled “First look inside Dior at the V&A: haute couture with a very British twist” was written by Jess Cartner-Morley, for The Guardian on Wednesday 30th January 2019 08.00 UTC

Close your eyes and think of Dior. What comes to mind? Christian Dior never had a pet movie star, like Givenchy had Audrey Hepburn; nor a longstanding muse, as Catherine Deneuve was for Yves Saint Laurent. So the odds are, that you think first of all of the New Look suit. The wasp-waist jacket with a full skirt have come to stand for Dior and, beyond that, for fashion itself – the very idea of a must-have New Look. This suit is the first thing you see when you enter Christian Dior: Designer of Dreams, which opens at London’s V&A Museum on Saturday.

On Monday morning, as the exhibition installation was in its final stages, the head of Dior had arrived from the Eurostar, ready to host the opening parties. Maria Grazia Chiuri, Dior’s first female designer, was wearing jeans, black boots, and a thick-ribbed navy sweater under a clean-lined navy cashmere coat. Maria Grazia, as her team call her, wears her short hair bleached and slicked back, her eyes heavily rimmed with kohl, her knuckles encrusted with heavy jewellery. She is not the wasp-waisted, full-skirt type.

What the designer, who was born in Rome in 1964, does have in common with Christian Dior, who founded his eponymous house 17 years before she was born, is a love of Britain. This Dior exhibition was first shown in Paris two years ago, but has been expanded by the curator Oriole Cullen to tell the story of Dior in the UK. British society adopted Dior from the start – Nancy Mitford and Margot Fonteyn were two of the 21 private clients who ordered the Daisy suit – a rounder, more decorative version of the Bar from Dior’s first Paris show. Within a year, Dior was staging fashion shows at the Savoy, conveniently close to his preferred Savile Row tailor; soon, he upsized to Blenheim Palace.

“I love being in a country where the past lies so vividly around me,” he wrote in his memoir, Dior on Dior. (Monsieur Dior raved not only about Savile Row tailoring but also the style of British women and the food.)

“From the moment I came to Dior, the link with Britain was very clear to me,” says Chiuri. “People tend to think of the Bar suit as being very feminine, and it is. But when I look at it, what I see is tailoring – really strong British tailoring. Almost severe.”

Chiuri has loved London since she discovered the Beatles when was 12, she says. As a fashion student, she talked her way into an early John Galliano show in Olympia. These days, she is a frequent visitor to London, as her 24-year-old daughter, Raquelle, lives in the city. “For anyone who works in fashion at a brand with a history, Britain is fascinating, because it balances modernity with tradition, which is what we try to do,” she says.

This will be the first fashion exhibition to be staged in the V&A’s new Sainsbury Wing, and the Dior in Britain section gives the show a timely emphasis on the idea of Britishness, and presents Princess Margaret as Dior’s answer to Hepburn or Deneuve. Her status as a fashion icon has been boosted by gorgeous wardrobing in the Netflix series The Crown, presenting Dior with an opportune moment to lay claim to the real-life princess, who wore Dior for her 21st birthday party.

“She crystallised the whole popular frantic interest in royalty. The public had chosen well. She was a real fairy princess, delicate, graceful, exquisite,” wrote Dior of the young Margaret. The birthday party dress takes pride of place in the room devoted to his work in Britain, alongside the famous portrait of Margaret by Cecil Beaton.

No fashion exhibition staged since Savage Beauty, the world-beating Alexander McQueen retrospective, can escape the comparison. The success of that show put fashion exhibitions on the map by showing museums their potential for pulling in a wider audience. But it is impossible to match for sheer drama, and casts a long shadow. This exhibition has an entirely different emotional tone. There are no shock tactics. All is sunny, pretty and deliciously gossipy – which is not to damn with faint praise; it is, frankly, charming.

Dior died after just a decade helming the house, and so his talent is not part of the story long enough to be the central focus of this show. Instead, in this sensational line-up of haute couture dresses – every single piece in this show is handmade – we see the work of the stable of designers, including Yves Saint Laurent and John Galliano, who have captained the ship between Dior and Chiuri.

It is the creation-myth Dior years, however, that make the case for fashion as an epoch-defining art form. The New Look was not just a trend, it was a vision of Paris reborn in a perilous postwar moment when it was not at all clear that French fashion would be able to reclaim its primacy. Dior became a national hero in France as a result.

The cover of Time magazine on which he featured shortly before his death is displayed alongside the Bar suit. A true modernist, he was decades ahead of his time in building a global brand, travelling to Venezuela, Japan and Australia as well as London and New York. In the afterglow of the New Look’s success, he literally bottled his success and sold it: Miss Dior perfume went on sale for Christmas in 1947.

The pale grey walls and white columns of Dior’s Avenue Montaigne headquarters have been adopted in the exhibition, adding to the sense that this is a show about a design house, not just a man. Rooms are arranged thematically, from “Historicism” to “Garden”. This doesn’t lend itself to narrative drama, but the Garden room – with hanging paper wisteria and roses, and a bench to enjoy the view of ravishing dresses – is a delight.

As a result of the thematic layout, haute couture by Dior and Chiuri is mixed in with the other designers in each room. The Yves Saint Laurent pieces are, in many cases, the most timelessly chic. But it is impossible not to become aware that it is the Galliano pieces to which the eye is immediately drawn. The rest of a group of Egyptian-themed dresses seem to blend into the background when juxtaposed by Galliano’s turquoise python skirt suit with a swollen stomach, paired with the jackal-headed Anubis mask with which it was worn on the catwalk.

No mention is made of the ignominious circumstances in which Galliano, who was found guilty of racist and antisemitic abuse in 2011, left the house. To revisit the showstopping dazzle of the Galliano years without context feels a little jarring, in an exhibition that elsewhere embraces the links between fashion and wider society.

Chiuri wants to align Dior with modern feminism, and it is Marc Bohan, one of the lesser-known Dior designers, with whom she feels the most affinity. “His work was so contemporary. He had a quote that I love – ‘N’oubliez la femme’ – ‘Don’t forget the woman.’ For me, it’s impossible to forget the woman – I am the woman,” she says. She is “surprised every day,” that she is at Dior and at the V&A, she says, “but still, I want more. It is not just about me, as a woman. I want this brand to be about women, and I want this brand to care about women.”