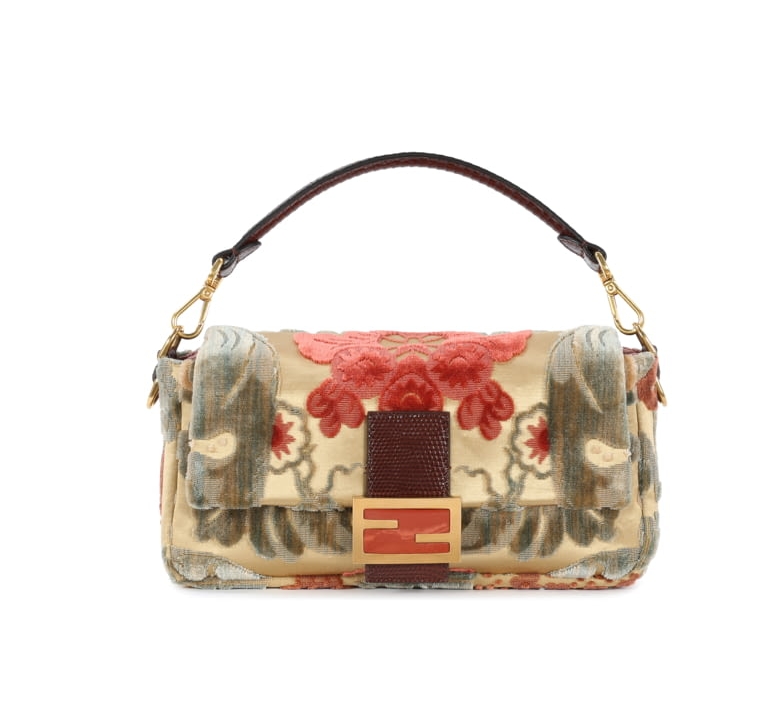 This article titled “Fendi’s magic touch: the woman behind the world’s most famous handbag” was written by Scarlett Conlon, for The Observer on Saturday 28th November 2020 15.00 UTC

Last year, Silvia Venturini Fendi was on holiday with her girlfriends in Palermo when she came across a small bottega run by a middle-aged artisan and his father. Enchanted by the beautiful handmade homewares on display, she spent all morning in the store-meets-workshop buying up pieces for her Roman home. A passionate preserver of Italian artisanship, she asked where the third generation was? The man’s daughter, despite knowing how to make everything, was only interested in becoming a fashion model, he said. “What a pity,” Venturini Fendi replied. “She should come here and continue all these incredible things you’re doing. Sometimes you look far when you don’t see great things happening under your eyes.”

The man implored her to convince his daughter and, in classic spontaneous Italian style, it wasn’t long before Venturini Fendi was on the phone sharing her own enthusiasm for family businesses. “The way you learn is by watching people working,” she tells me. “There’s no instruction manual – artisans have to pass on and show their creativity.”

The artisan didn’t know that he was speaking to the creative director of one of Italy’s oldest fashion dynasties that day (although she says they have become friends since). Neither did his daughter know she was about to get a careers masterclass from a woman who knows what it means to have kept her own family’s 95-year-old fashion house at the forefront of the industry for decades.

In 1994, Venturini Fendi joined the family business that her grandparents, Adele and Edoardo, had started in 1925 and which from very early on became a byword for Italian luxury. In the 1940s, it passed to their daughters, the Fendi sisters Paola, Franca, Carla, Alda and Anna – Venturini Fendi’s mother. After joining the family firm, she became head of accessories under the late Karl Lagerfeld, the much-loved creative director.

Prior to her official appointment, Venturini Fendi had cut her teeth as the family’s global ambassador with a reputation as the queen of Rome’s social scene, working hard managing the Fendi trunk shows in New York – and, by her own admission, playing just as hard. (She told Harper’s Bazaar that she and her sister, Maria Teresa, “would work like crazy and then go out all night” arriving at the Bergdorf Goodman store in the morning “still wearing our evening dresses, high heels, and makeup from the nightclub”.)

Ultimately it was her design mettle that was destined to take centre stage. Soon after her appointment, she conceived the brand’s popular Fendissime line and designed the Baguette bag, which is regarded as one of the most iconic fashion creations ever made – and for which the brand is arguably best known.

Venturini Fendi knows the importance of honing her craft and maintaining a family brand. Fast forward to 2019, and her unexpected rendezvous in Palermo would pave the way for making sure the younger generation hopefully would, too.

“I went home that day thinking how much young people are affected by what they see on Instagram and TV and it’s all our fault – myself and the industry,” says Venturini Fendi, now 59. “We shouldn’t just talk about the shows, the photoshoots and the clothes, but all aspects and incredible artists who are behind all our projects.” Cue Hand in Hand, a passion project that has seen the designer enlist artisans from 20 Italian regions to reimagine her original brainchild, the Baguette. The result is a bona fide retrospective of Italy’s most exceptional craftspeople at work.

In Lazio, independent jeweller Massimo Maria Melis commemorated Rome’s rich history of marble production by using hand-carved marbles extracted from quarries to decorate his take on the Baguette. On the east coast in Abruzzo, L’Aquila-based artisan Simona Iannini used a special lace technique called tombolo aquilano, practised in the 1400s by Benedictine nuns, to make hers. And in Veneto, family-run Venice-based jacquard artisans Luigi Bevilacqua embarked on a hand-woven soprarizzo velvet and silk process, made on an 18th-century loom, to construct theirs. Baguettes from 17 other regions have similar stories.

“Centuries-old traditions can create a product of the highest historical and artistic value,” says Alberto Bevilacqua, CEO of Luigi Bevilacqua. He adds that “the complexity of the workmanship of its velvet requires the work of a weaver with at least seven years’ experience,” affirming Venturini Fendi’s insistence that this type of craftsmanship is protected.

That the project is launching as Italy enters its second phase of lockdown due to the Covid-19 pandemic is coincidental, but very poignant. Local artisan businesses were already on the brink of extinction in small villages all over the country before the virus propelled many into a financial situation they will find it hard to recover from if they are not safeguarded. Bevilacqua points out that the devastating floods in Venice at the start of the year compounded by the pandemic have resulted in a massive team effort to get back on track.

“Time is short,” says Venturini Fendi, “and we need to show what we can do when we work together.”

The designer is in something of recovery mode herself. Like the rest of the world, 2020 brought its logistical challenges to her brand (now owned by conglomerate LVMH), but felt especially tough given that she and her family are still in the process of grieving for Lagerfeld, who died in February 2019. Outside fashion circles, the legendary designer may have been better known for his simultaneous work at Chanel, but it was to Fendi that he devoted 54 years of his working life, making his collaboration with the house the longest ever between a designer and fashion brand in history.

For Silvia Venturini Fendi, Lagerfeld was not just her mentor, but an honorary member of her family. She first met him when she was five years old and they worked side by side – her on menswear, him on womenswear – for the majority of her adult life. Over the past year, she has thought, “What would Karl do?” a lot. “During this strange period, I’ve been thinking about how he would react and I’m sure he would be the first one to jump on something new, see things positively and try to make the best out of it,” she says. “He was always interested in changing the mood and in new challenges. I’m trying to [adopt this way of thinking] myself.”

Venturini Fendi says such reflection has highlighted the benefits that can come from leaving her comfort zone. “It’s been a difficult year. I was worried at the start of lockdown, thinking about the [time that was being lost] working on the collections, but I saw that we can solve problems and sort them out,” she says.

She emerged from the first lockdown with a fresh approach. “I used to think about things in an obsessive way; today I am more detached, and it’s liberating.”

As is a newfound confidence in herself. For all the positivity that comes with continuing in family footsteps, the need to prove oneself when working in a family business seems never more scrutinised than when it comes to fashion.

“For many years, I’ve thought, ‘Am I a fashion designer because I was born into this family? Or because I am a fashion designer?’” she says. “Today, I have the answer to that question. I love this job, I would have done it even if I wasn’t born into it – even though I have other passions, like landscape gardening and I can see myself decorating beautiful houses one day. Fashion is such a total experience, when you do it you don’t have time for other things.”

Although the brand is approaching its centenary in 2025, Venturini Fendi prefers to think in the present while honouring the past and looking into the future. “In fashion, time is very short. I don’t think it’s possible to have a long view to something that is so distant,” she says, adding that the brand will always pursue the “interesting and new”.

A big part of this newness has to do with the appointment of British designer Kim Jones as creative director of womenswear in September. “I am very excited,” she says of the Dior menswear artistic director who will split his time between the two brands. “I’ve known him for a very long time, always admiring his attitude and way of thinking. I am very happy we are working together.” For his part, Jones, who will be designing women’s collections for the first time, called it “a true honour as a designer”.

While tight-lipped about his first collection, which will debut in February 2021, Venturini Fendi adds: “I feel stronger designing with someone. The exchange you have is so interesting, to see things through different eyes… It’s something that suits me. I’m not a solo person at all.”

It’s a gene she credits to her upbringing and her family’s shared devotion to their brand and each other. As a result, she says, the concept of collaboration comes naturally to her. “In Italy, we say that unity is the force of a family, so I have always learned to share.”

From sharing the spotlight to supporting Italian artisanal talent to the future of her brand, it’s a hopeful optimism Venturini Fendi relishes in. Not to mention her advice to young hopefuls.

As for what she ended up saying to the artisan’s daughter on the phone… “I told her to think very carefully about what she should do with her life. Next year, when we can have real contact again, I’ll go and check,” she laughs. “But I am confident. I want to be positive.”

Fendi’s Hand in Hand collection is available on request at fendi.com