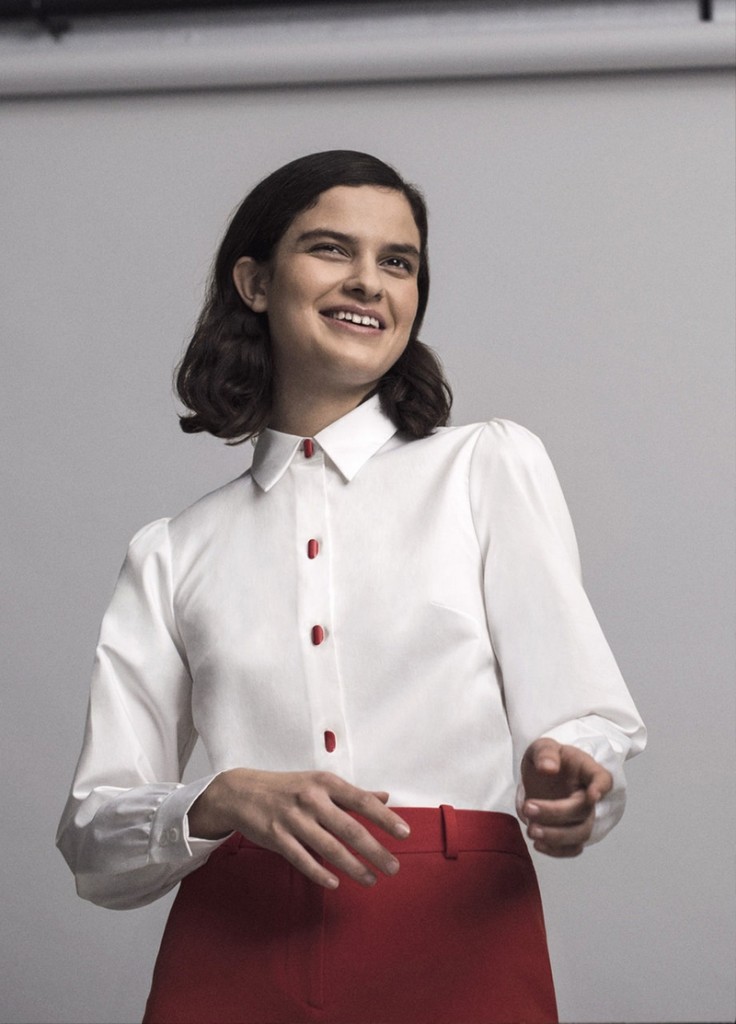 This article titled “Every woman needs a classic white shirt – here’s how to wear it” was written by Jess Cartner-Morley, for The Guardian on Tuesday 19th June 2018 15.11 UTC

These days, when I really don’t know what to wear, I wear a white shirt. It took me a long time to figure this out, but I’m glad I got there in the end. What I realised was that a wardrobe crisis is about identity, not clothes. It is about using clothes as a metric for squaring who you are with what other people see; about ambition or impostor syndrome. A wardrobe crisis isn’t really a fashion problem, so piling on the trends only confuses things further. On days when the prospect of getting dressed feels problematic and fraught, a white shirt brings you back to serenity.

In her years as a celebrity stylist who worked with Carey Mulligan, Meryl Streep, Florence Welch, Ellie Goulding and Anna Calvi, Lauren Grant found that a white shirt was often the trump card on her clothes rail. “The classic white shirt or blouse makes every woman look a little bit more French, which is never a bad thing,” she says. This month, Grant has launched her quirky takes on the classic white shirt with a new label, Sark. It is the new kid on the block in a growing niche of high-fashion shirt specialists. Palmer Harding is an east London-based brand with broad-spectrum appeal – collections have been inspired by Helmut Newton and celebrity fans include Theresa May. It has become a fashion-week favourite for its white shirts (or, at a push, pale blue) elevated with portrait collars or ruffled asymmetric hems.

At Sark (Scots for “shirt”, a name inspired by Grant’s Glaswegian mum), the devil is in the detail. There is a Valley of the Dolls vibe to the first collection: the Fake Nail blouse has glossy red talons for buttons, the Prozac blouse fastens with a row of green-and-white metal capsules. Grant borrowed the red nails idea from Guy Bourdin’s classic image, first seen in French Vogue in 1970, of a red-lipped model whose eyes are covered with several hands’ worth of red talons. Grant says: “I mixed that image with memories of my mother’s beautifully painted red nails before she used to go out in the 90s and my early (unsuccessful) attempts to re-create the look by going to Boots and buying Sally Hansen stick-ons for £1.”

The Prozac buttons, which are handmade in Birmingham and unscrew just like real capsules, are a homage to Damien Hirst and the 90s Young British Artists scene. (In 2018, they also look modishly Patrick Melrose.) “However much I like the idea of women looking sophisticated, classic and French, I’m actually British, which means I have a desire to inject a sense of humour into clothes and raise eyebrows,” says Grant.

A white shirt can be very sexy. Think of Marilyn Monroe, photographed in a crisp white shirt and dark jeans by Eve Arnold on the set of The Misfits in 1961. Or Elizabeth Taylor, who decreed that “every woman should have a great white shirt in her wardrobe”. It is no coincidence that white shirts have been a recurring theme in model iconography; Peter Lindbergh’s 1988 Malibu beach group shot of Christy Turlington, Linda Evangelista and co, which came two years before the classic British Vogue cover – and was one of the first images to frame the supers as a group – had them dressed in oversize white shirts. In Patrick Demarchelier’s power portrait of Claudia Schiffer, Cindy Crawford and the gang for the cover of the 100th anniversary edition of American Vogue, white shirts – tied at the midriff, this being 1992 – were the uniform.

Ruth Chapman, founder of matchesfashion.com and one of the most perennially stylish women in London, is often to be seen in a white shirt. “They seem to freshen up a tired complexion,” she says. “Red lipstick and a white shirt – that’s my go-to for any occasion. I wear one with a huge skirt for an evening event. They’re a staple of my wardrobe. I love a tailored white shirt, but also an oversize collarless one with a deep sleeve rolled up.”

“Princess Di, Bianca Jagger, Jean Seberg, Sade, Brigitte Bardot, Faye Dunaway and Jane Birkin” are Lauren Grant’s white-shirt idols. Natalie Kingham, fashion and buying director at Matches adds: “I think of Diane Keaton, Carolina Herrera, Patti Smith … it’s the varied women and way they interpret it that makes the white shirt an endlessly, effortlessly chic item. I have many and never tire of them.” This spring, logoed white shirts by Burberry, an elegant swing-back style by Raey at £225 and an oversize cotton shirt by MiH at £155 are all flying out at Matches.

The egalitarian, gender-neutral aura of a white shirt gives it bullseye positioning for the 2018 wardrobe. With Frida Kahlo’s flamboyant, unconventional glamour being celebrated at the V&A, narrow definitions of femininity are being challenged from every direction. And shirt-wearing projects the idea that you are, you know, across all this stuff. “As a garment, the shirt has such a rich heritage,” says Levi Palmer of Palmer Harding. “White collar v blue collar; masculine v feminine.”

Instagram has turned life into a styling contest, like it or not; the simplicity of the white shirt spotlights your skills. Meghan Markle would not have caused nearly such pandemonium with Misha Nonoo’s Husband shirt had she not had quite such a perfect half-tuck into the waistband of her jeans. “What feels fresh about the white shirt now is how it is styled, rather than the piece itself,” says Harrods’ womenswear guru Maria Milano. “Taking it out of its formal habitat and landing it in an unexpected setting – as a beach cover-up, or tied 80s-style over a pair of high-waisted jeans – lends an air of nonchalance and takes all the stiffness out of the look.” (Milano tips Helmut Lang for the perfect white shirt.)

On which note, I will leave you with a trick of my own. My own, in so much as I brazenly copied it from a stylish PR friend. You can make a plain white shirt uniquely you, by stamping your initials on to it. Many traditional shirtmakers will monogram the cuffs of your shirt for you. I can’t tell you how cheering and how disproportionately confidence-boosting I find the JCM I have stitched on to the cuffs of my favourite white shirt. Charles Tyrwhitt, which sells classic white shirts for around £30, will monogram the cuff (you choose the font and colour) for £8.95 a letter – which doubles the price of the shirt, but makes it many times more special. Wardrobe crisis solved? A price beyond rubies.