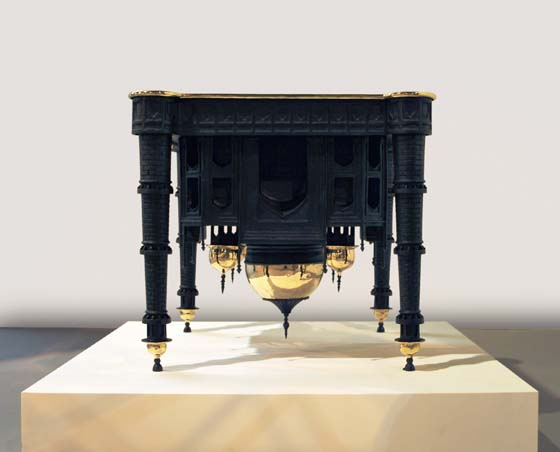 Job Smeets and Nynke Tynagel, or Studio Job, “a love-’em-or-hate-’em Belgian-Dutch design duo” according to Time Magazine, presented at Art Basel Miami 2012 an upside down Taj Mahal in form of a table. The Indian architectural beauty included in “Seven wonders of the world” list boasts flashy gilt domes and was commissioned by Shah Jahan, one of the distinguished Mughal emperors in the memory of his third wife, Mumtaz Mahal.

Studio Job’s table is made of bronze unlike the white marble in Taj Mahal. Available in a limited edition of eight, the mini Taj Mahal furniture item is priced at €36,000.

The lead designers of Studio Job, Job Smeets and Nynke Tynagel, met while attending the Design Academy Eindhoven. Studio Job was formed by Smeets after he graduated in 1998 and Tynagel joined him upon her graduation in 2000. Items designed by Studio Job have been shown in museums and galleries around the world, and have won many design awards. Together with Maarten Baas and Jaime Hayón, Studio Job have renovated The Groninger Museum in the Netherlands. Studio Job created the entrance hall (above), featuring stained-glass windows and furniture inlaid with skeletal images.

Job Smeets and Nynke Tynagel collaboration has created highly expressive, mainly one-off or limited edition works, from the outset. Often cast in bronze or, later, crafted from laser-cut marquetry, the physical potential and malleability of the materials they use is pushed to the hilt. Their approach is more in keeping with that of traditional guilds than anything industrial. For Studio Job, creation is pre-eminent over definition. Smeets describes it thus:

“Unlike most, we are probably not coming from Modernism. Studio Job’s contribution is that we have rediscovered a lost path. Consciously and carefully, we are positioning decorative arts in the twenty-first century. Is that design? Whatever. Is that art? Whatever, really.”