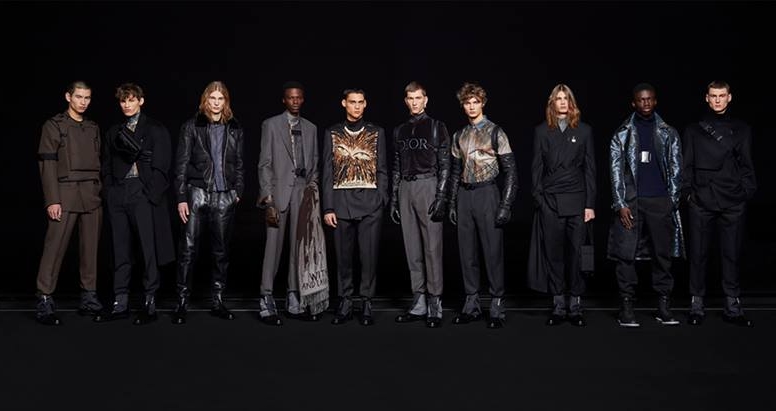 This article titled “Dior shows the suit is back, as tailoring outweighs sportswear” was written by Morwenna Ferrier in Paris, for The Guardian on Friday 18th January 2019 20.58 UTC

In Paris, the suit is back. Or is at least attempting a comeback.

It was always going to be high on the agenda at Dior, which showed its autumn/winter show on Friday night. Artistic director Kim Jones might be the man who spliced tailoring with streetwear at Louis Vuitton, most notably in his 2017 collaboration with Supreme, but for his second collection at the fashion house he focused on “architectural tailoring”, drawing heavily on the label’s couture heritage – despite this being a ready-to-wear show.

“It’s about reaffirming Dior with lots of tailoring … except with this spirit of now,” he said the evening before the show.

Yet elsewhere on the Paris catwalks this week, tailoring has outweighed sportswear for the first time in several seasons. Both Dries Van Noten and Berluti closed their shows with civilised black suits, but even Vetements, king of subversive anti-fashion, and Louis Vuitton’s Virgil Abloh, king of streetwear, opened their shows with a handful of princely suits.

The Dior show took place in a giant black box within the Champ de Mars park, behind the Eiffel Tower. Inside, the models were static, carried along a 76 metre conveyor belt designed to look like a salon show on a giant scale.

This tableaux vivant replicated the statues outside, but was chosen because Jones thinks it is the “nicest way” to display a suit. It also photographs well, proving that even in an industry which sets its clock by social media Jones knows what he is doing. That some wore tabards and vests gave it an Action Man feel, although this was accidental.

“The armour is not a reference to what’s going on at the moment in politics here,” he said. “We were looking at that reference six months ago. It’s my third collection, and you get a bit insular.”

The six-day Paris event might be menswear’s largest, and busiest – only here is the schedule expanding not contracting – but that does not mean it’s free from drama. With gilets jaunes anti-government protests predicted to take place on Saturday 19 January, Dior was one of the shows to change times, moving its show back one night.

Jones seemed nonplussed – “we’re quite organised, so it’s not been too bad to change – a few guests missing perhaps” – but the reality was, one imagines, slightly more fraught.

The collection showed 39-year-old Jones’s ability to rework couture for a modern crowd. The suits came inlaid with satin, creating a sort of inside out effect, in colours of mink, light blue and black.

There was season-appropriate cashmere, and some hip oversized knitwear designed in collaboration with punk artist Raymond Pettibon, made “using a technique which resembles Moire” which everyone had to Google.

Unlike many of the shows this week, there are no women on this catwalk. “We don’t need women here, this is men’s. I’ve got to respect Maria Grazia [Chiuri, creative director of womenswear at Dior].”

Still, the saddle bags were reworked from women’s, while the “hardcore leather opera gloves” had a certain gender fluidity.

From afar, it all looked simple enough, but up close techniques including flou and moulage (a method of draping) revealed Jones to be as ever, a stickler for detail. He enjoys these flourishes, of “carrying the concept of Dior as a gallerist as well as a couturier”, although one hand-beaded shirt which required 16 people working for 1,600 hours, was as much work as art.

Despite being “pretty tired” the day before, he still had one eye on friend David Beckham, who popped in the day before to say hello, and the other on the commercial.

“The red carpet is not usually something I think of a lot but we are dressing a lot of people,” he said. At the Golden Globes, Dior was worn by nominees Viggo Mortensen and Darren Criss. No surprise that Dior is still the world’s biggest luxury brand. The suit expected to appear on the next round of red carpets is a classic shape with a long satin wrap. “Black tie can be a limited thing, but you don’t want it too peacocky.”

Plus the stars love him. Just before Beckham turned up, Christina Ricci entered holding a tiny dog, and proceeded to take photos in the mirror. Behind her, Kate Moss and Naomi Campbell exited minutes apart. All sat front row.