The Queen’s House and Réchauffoir/ The Warming Room (where dishes were warmed before being served at the royal table) – reopened to the public on May 12th, thanks to patronage from Dior. Dior 2018 haute joaillerie jewels evoke a secret Versailles, one made of private passageways and clandestine boudoirs.

Located in the heart of the hamlet built for Marie-Antoinette by Richard Mique between 1783 and 1787, the House was in need of full restoration work. Alongside this, it has been refurnished according to its oldest known historic condition, which is as it was designed for Empress Marie-Louise, the second wife of Napoleon I. For the first time in two centuries visitors will be able to discover the extreme refinement of the interior decor of the House and its contrast with the picturesque bucolic appearance of the exterior.

The restoration of the Queen’s House and the Warming Room, located nearby, had become all the more necessary since their state of dilapidation prevented them from being open to the public.

The project, launched in 2015, involved cleaning and full restoration of the stonework, framework and roofing. The structures have been strengthened to allow guided tours while the flooring, woodwork and paintwork have been restored according to descriptions in the 18th-century work logbooks, or according to the arrangements made in the early 19th century by Empress Marie-Louise, the wife of Napoleon I and the last person to live here.
AN EXCEPTIONAL REFURNISHING PROJECT

The restoration of the interior decor and refurnishing of the main rooms in the Queen’s House and the Games House were a major part of this operation. Two hundred years after the fall of the Empire, these places have rediscovered their refinement designed for Marie-Louise and the deliberate contrast desired by the French sovereigns between rustic “shabby” exteriors and interiors of mind-blowing luxury.

Masons, joiners, carpenters, thatchers, electricians, heating engineers, painters, gardeners… All types of tradesmen (or almost) have taken part in this operation led by Jacques Moulin, Head Architect for Historic Monuments. From cabinetmakers to silk suppliers, trimmings suppliers, upholsterers, ancient textile restorers, leather workers, bronze workers, sculptors and gilders, multiple artistic craftsmen have contributed to the success of the project, managed by Jeremiah Benoit, Head Curator at the Palace of Versailles in charge of the Palaces of Trianon. Once again, the high- level expertise of French craftsmen has been brought to the fore. 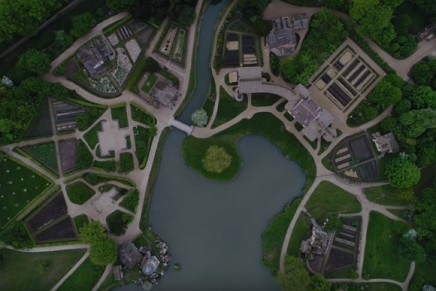