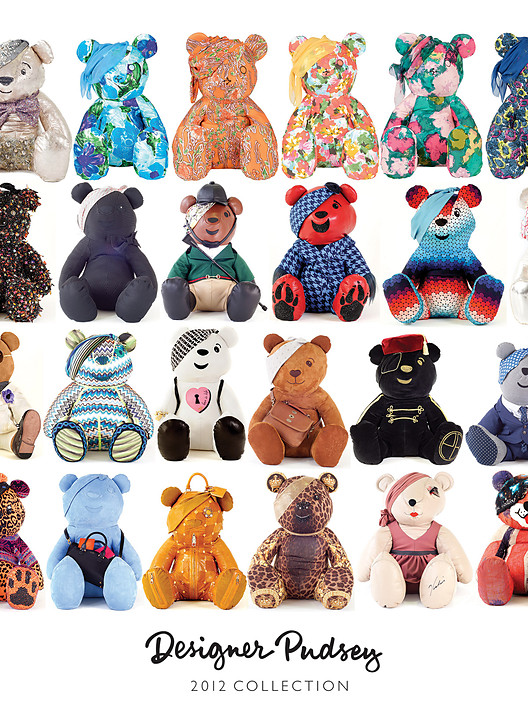 In 2011, BBC Children in Need launched the Designer Pudsey Collection. This saw 14 designers restyle the charity’s Britain’s best-loved bear. Raising over £50,000, the inaugural Collection caught the attention of the press, fashion world and public alike: going on to be voted one of The Independent’s “Top 15 fashion moments of the year.”

The fashion bear project far exceeded the charity’s expectations. Curated by LOVE editor and stylist Katie Grand, The Designer
Pudsey 2012 Collection builds on last year’s success. 2012 sees Pudsey fashioned with a variety of different fabrics and techniques. From suede to leather, silk to Swarovski Crystals, the diverse designs reflect the creativity and breadth of the fashion industry.

Rainbows of colour from the world’s catwalks are reflected in this year’s ensemble. From the elegant restraint of Smython’s powder-blue creation to the tinsel, gold and glitter of Hindmarch‘s AW12 inspired bear. Signature fabrics, prints and motifs abound with McQueen’s Floral Pudsey; Sibling’s Punk Pudsey and Prada’s Schoolboy Pudsey all informed by contemporary collections. The unparalleled heritage of Gucci is embodied in their Equestrian Pudsey and Burberry’s English Gentleman Pudsey sports their iconic trench.

All of the bears are auctioned off by Christie’s to raise money for BBC Children in Need.

Before making its way to Christie’s for auction, the whole luxury fashion bear collection will be exclusively exhibited in the London & Manchester Selfridges stores from 24 October until the 14 November 2012.