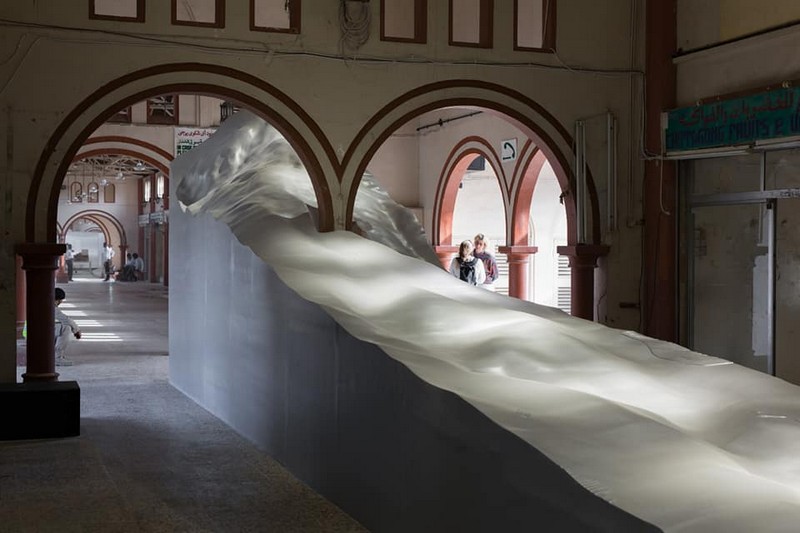 A perfectly manicured lawn lines either side of the eight-lane highway leading into the Gulf city of Sharjah. Punctuated by rows of palm trees and pink-blossomed flowerbeds, it is a lush, implausible vision, sustained by a constant mist of sprinklers beneath the scorching sun. Beyond the green ribbon, expansive gated villas sprout from the sand, giving way to mirrored glass towers, leading to a reconstructed “old town”, where air conditioning is pumped into the alleys of an open-air souk.

It’s not hard to see how the United Arab Emirates, of which Sharjah is the third largest city-state after Abu Dhabi and Dubai, is one of the highest emitters of carbon dioxide and consumers of water per capita in the world. It is a place where souped-up SUVs roar from man-made islands to malls with indoor ski slopes, where water is flushed by the gallon into ornamental gardens, where energy is guzzled with end-of-the-world glee, deaf to the pleas of Greta Thunberg. But before you start sneering, this petroleum-fuelled, water-hungry lifestyle is mostly the doing of British and American conglomerates, the result of an Anglo-centric idea of a city imposed on a desert climate that could never sustain it.

Post-colonial legacies, climate justice and water equity are just some of the testy topics that feature in the inaugural Sharjah Architecture Triennial, a three-month extravaganza of exhibitions and events that opened this week. Billed as “an archipelago of struggles”, the programme has very little to do with buildings, and a lot to do with the forces shaping our planet. It draws on the work of architects, engineers, activists, performers, choreographers, scientists, musicians and anthropologists to present a portrait of climate catastrophe, indigenous land claims, illegal occupation and more – all under the momentous title Rights of Future Generations.

“I have a very expansive definition of architecture,” says curator Adrian Lahoud, an Australian of Lebanese descent who is dean of architecture at the Royal College of Art in London. He’s not wrong. In the courtyard of a former high school, taken over as one of the main venues, Balinese gamelan musicians perform next to a display about the politics of satellites and an installation about Palestinians being maimed in Gaza. Nearby there are exhibits about the destruction of sacred Ethiopian forests, the meaning of UN development videos and the geography of the call to prayer in Mecca.

This aversion to buildings is shared by many recent architecture biennials and triennials, from Chicago to Oslo. Staking a claim for architecture’s social conscience in a time of global crisis, these events raise worthy issues, but the question is whether such themes translate into good exhibitions, or feel more like a series of PhD proposals stuck on the wall.

The projects on show in Sharjah tread this fine line with mixed results: some important topics are clouded by opaque theoretical posturing, while others are executed with visceral clarity. One of the most compelling contributions comes from Spanish-Israeli duo Cooking Sections, who have constructed a series of rocky bowls in the school’s forecourt, sunken into the sandy landscape, in which desert plant species have been planted.

Water consumption is set to double by 2030, with half of it used on irrigation

Looking like mini-volcano craters, these rubble-lined depressions are designed to enable irrigation without water. Based on ancient techniques of cultivation found in places such as Lanzarote and Algeria, the bowls create little micro-climates for the plants, shielding them from wind and collecting condensation on the underside of the rocks.

“The nurseries here in the UAE don’t grow desert plants, because they’re not seen as ornamental,” says Alon Schwabe, one half of the duo. “We want to propose an alternative model for non-irrigated urban gardens in Sharjah and other arid climates, bringing the desert back into the city.”

Working with engineers AKTII, Cooking Sections have equipped their rocky craters with sensors that record factors like leaf moisture, heat radiation and wind speed, displayed on a nearby screen that will monitor the performance of the garden until the next triennial. It is a beautiful, climate-appropriate creation that deserves to be noticed in a place addicted to western ideals of grassy verges and exotic shrubbery – where water consumption is set to double by 2030, half of it used on irrigation.

The problem of water, both its scarcity and overabundance, is a theme of the triennial. Bangladeshi architect Marina Tabassum presents a fascinating study of the delta region in the south of her country where three rivers collide to create a constantly changing landscape. Satellite images show how swaths of sandy soil appear and disappear from one season to the next, seeing families dispossessed of their land overnight, sometimes waiting generations for it to re-emerge from the waters.

“Under British rule, land ownership was formalised with plots drawn on a map,” says Tabassum. “It’s a ‘dry culture’ idea imposed on a ‘wet culture’: when the monsoons come, you have a piece of paper, but no land. So families hold on to their papers for years, waiting for the land to come back.” Her research is housed in a series of three charming little timber-framed houses with ornamental rooftops, available to buy off-the-peg in Bangladesh, designed to be disassembled and moved on a truck at a moment’s notice.

While the Bengali delta-dwellers have too much water, the Quechua people in the Atacama desert of northern Chile don’t have enough. The battle for access to water is at the forefront of their struggle against global mining conglomerates, whose extractions have seen some local water supplies drop tenfold over the last decade. Stunning backlit aerial photographs shine out from a darkened room, along with a projection-mapped model, depicting ancient geoglyphs carved into the sandy mountainous landscape of the Atacama desert. These primitive works of land art – depicting human figures, animals and enigmatic symbols – were created by nomadic travelling tribes, but they’re now being used as a powerful legal tool by the Quechua to stake their claim to the land.

“The mining companies have devoured our resources and poisoned our water,” says Mauricio Hidalgo, president of the indigenous community of Huatacondo in Tarapacá, who travelled to Sharjah for the triennial. “But the geoglyphs have given us a voice and a spiritual force that we never imagined we could have. We are regaining our dignity and autonomy because of this public art that our forefathers have bequeathed us.”

The mining companies respect us today more than ever

Working with lawyer and anthropologist Alonso Barros, the community has mobilised the ancient geoglyphs, which now have the status of protected national monuments, in an effort to protect their ancestral lands from further mineral extraction. “The mining companies respect us today more than ever,” says Hidalgo. Strangely none of this is mentioned in the exhibit itself, which simply focuses on the archaeological beauty of the geoglyphs, with no reference to how they are being weaponised in the fight for territorial justice.

The role of art in land-rights struggles is more directly conveyed in another exhibit across town at the Sharjah Art Foundation, where the aboriginal Ngurrara people of Western Australia have brought their stunning Ngurrara Canvas. In a lengthy legal battle in the 90s, the indigenous Australian community had to provide proof of their connection to the area, including the continued existence of laws and customs, and their routes across the land.

Feeling that their history couldn’t be expressed in English, they decided to paint their right to the territory instead. The resulting 80sq m painting, made over a fortnight by 40 artists, is a dizzying patchwork quilt of signs and symbols that represent watering holes, campfires, and places of birth and burial, in a kaleidoscopic collage of ritual and memory. (The visual testimony worked: in 2007, the claim was successfully determined in favour of the Ngurrara.)

The elephant in the room, looming over all of these powerful explorations of global rights crusades, is the UAE itself. Last year, the country’s most well-known human-rights activist was jailed for 10 years over some tweets, while arbitrary detention of foreign nationals was frequently reported. The authorities continued to deny nationality to thousands of people born in the country, in effect rendering them stateless. Despite recent reforms, migrant construction workers face continued exploitation. Lahoud says workers’ housing conditions formed part of the triennial team’s initial research, but that is mysteriously absent from the show.

It also feels like a missed opportunity to engage with some of the urgent architectural and urban issues facing Sharjah itself. Much of the emirate’s fine modernist heritage from the 1970s and 80s is under threat of demolition, while the erection of air-conditioned glass behemoths, like the new Sharjah Mall and Waterfront City complex, continues apace.

Under Sheikha Hoor al-Qasimi, daughter of the ruler and the impressive force behind the Sharjah Art Foundation, some progress has been made. The triennial’s venues, including the school and a former vegetable market, have been safeguarded, adding to a dozen vacant buildings of the era that al-Qasimi has managed to preserve as art and community spaces. Another triennial project, by Italian studio Dogma, has seen a vacant lot transformed into a public space, which, it’s hoped, will become permanent.

Lahoud has set a powerful political precedent for this new institution, but future editions must have the confidence to engage further with the forces shaping the cities of the UAE, and tackle the country’s rapacious urban development – before it’s too late.