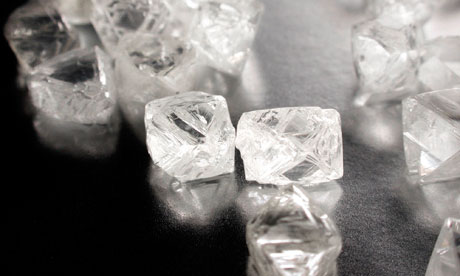 This article titled “De Beers profits from diamond boom” was written by Simon Bowers, for The Guardian on Friday 10th February 2012 09.30 UTC

The group’s trading division saw its second highest ever sales, rising 27% to $6.5bn (£4bn). While demand eased back slightly in the last six months of 2011 De Beers said it had benefited from the combination of lower than usual production levels and “exceptional consumer demand growth”. Pretax profit rose 48% to $1.27bn.

FTSE 100 mining group Anglo American, which already owns 45% of De Beers, last November signed a deal to acquire the Oppenheimer founding family’s 40% stake for $5.1bn. The deal is expected to close later this year, leaving the government of Botswana as the only other name on the share register with 15%.

De Beers produces more than a third of the world’s rough diamonds from mines in South Africa, Botswana, Namibia and Canada. Some 31.3m carats were extracted from De Beers’ own and joint venture mines last year, down from 33m for 2010. The company says all of its diamonds are “certified conflict free”, with more than two-thirds of its stones sourced from Botswana.

De Beers’ branded jewellery operation showed that demand was “particularly strong” in China. “The China opportunity is a priority for De Beers, with further 2012 expansion plans following the opening of stores in Beijing, Tianjin, Dalian and a second Hong Kong store in 2011,” the company said.

Looking ahead, De Beers said demand for diamonds this year was unlikely to match levels seen in 2011. “In spite of uncertainty, and barring a global economic shock, we expect to see continued growth in global diamond jewellery sales, albeit at lower levels than the exceptional 2011 growth. This will be driven by the overall strength of the luxury goods market, improving sentiment in the US (the largest diamond jewellery market), continuing growth in China, and the positive impact of the 2011 polished price growth on retail jewellery prices.”