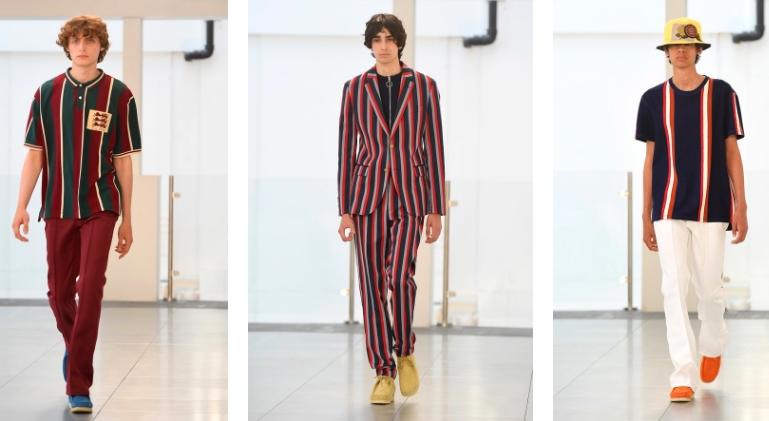 In many ways the timing couldn’t have been better. Two days after speculation began circulating on social media over whether Victoria and David Beckham were going to divorce, the couple put paid to the rumours with a show of togetherness, attending London fashion week men’s together.

As the newly anointed ambassadorial president of the British Fashion Council, David’s presence was necessary and felt. But at the private lunch and presentation of Kent & Curwen’s spring summer 2019 capsule collection – the British heritage label of which David is a brand partner – the couple arrived separately, although they stayed together. Sat either side of British Vogue editor, Edward Enninful, they ate deconstructed fish and chips, held hands, posed amiably for photographs and appeared relaxed.

Speaking briefly to the Guardian after the show, David said he was pleased with the collection – a collaboration with indie band the Stone Roses – adding that he was a huge fan of theirs and that his favourite song was I Am The Resurrection, an answer that remains open to interpretation. Victoria has attended presentations for the brand before, but this was her first appearance at a lunch. She wore a white striped kaftan dress from her pre-autumn/winter 2018 collection, while David, hair newly shorn, wore head-to-toe Kent & Curwen.

The collection itself was presented in a communal dining room filled with red roses and band posters. Overhead, songs from the band’s debut, eponymous album played. Guitarist John Squires, whose artwork appears on some of the pieces, and bass player Mani were also in attendance.

Under the creative direction of Daniel Kearns, a designer who has worked at Alexander McQueen and Louis Vuitton, the collection bridged the brand’s trad heritage style and a 90s rave aesthetic. Wide legged track pants, neoprene training tops and soft butter leather cagoules sat alongside wool jackets and collegiate-style knits. Bootcut trousers came in block colours with a permanent crease. Wide bucket hats were badged, and shirts came scrawled with school handwriting, an elevated take on youth culture. The mood was somewhere between the post-industrial wasteland of Spike Island, the venue for a legendary Stone Roses gig, and the luxe tailoring of the venerated British fashion house.

Earlier in the day, Fashion East’s MAN show took place in its spiritual home of east London. Although this showcase for three newish labels is less high profile, it remains London’s most radical show. The overall mood is closer to an art project than catwalk, which this year mixed themes of sustainability and recycling with nostalgic fancy dress.

The show opened with Stefan Cooke, the newest and most conventional of the three, who graduated from Central St Martins in 2017, quickly securing various industry awards for his sound tailoring meets awkward masculine glamour. The “luxury of boredom” was his theme, with models pairing form-fitting trousers in cream, black and plaid with jackets and shirts in the style of fancy dress. Add to that, chainmail vests, ostrich feather belts and heavy use of a machine washable paper which made up tabards, shirt fronts, and bags that, in a meta twist, were printed with photographs of other bags.

Led by Eden Loweth and his partner Tom Barratt, Art School, took their well-known queer fashion practice established in the autumn/winter 2017 show and funnelled it through sequinned gowns cut wide, on the bias or loosely, doubling up as vehicles for the collective’s take on self-expression. Queer artist Dominic Myatt accessorised the models, who were mostly friends and collaborators. With a focus on non-binary fashion, they aimed to celebrate the queer form in as glamorous a way as possible.

Rottingdean Bazaar, meanwhile, not only toyed with gender norms but the concept of a fashion show altogether: the entire “collection”, which among other inanimate objects featured a globe, an ear of sweetcorn and a Christmas tree, was hired from fancy-dress shops. “It’s our last Fashion East and we wanted to do something that didn’t involve making actual clothes,” said James Theseus Buck, half of the Sussex-based brand which launched in 2015 with Luke Brooks. They sourced all the costumes in six weeks from fancy dress shops. What appears to be a comment of sustainability – “it wasn’t consciously that” he said – was more of a comment on the industry. The result was a fun, funny riotous take on new, old and – of course – what menswear is. “It’s all going back to the shops tomorrow,” he added.