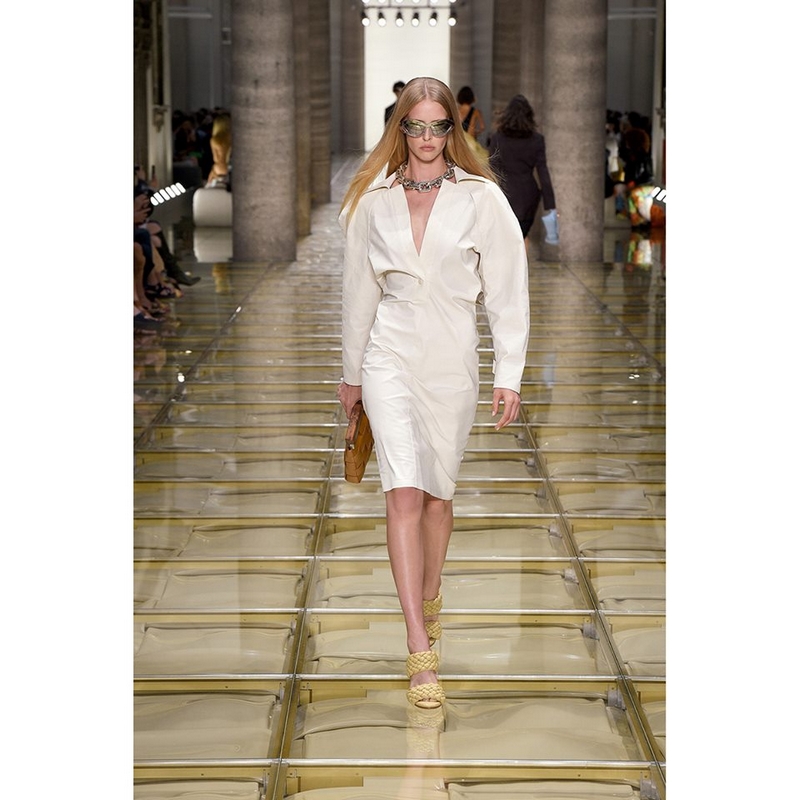 If the weight of being the most hyped designer of the moment has gone to his head, Bottega Veneta’s creative director, Daniel Lee, wasn’t showing it at his spring/summer 2020 show at Milan fashion week.

It has been seven months since the British designer made his debut for the Italian house to huge critical acclaim in February. Before his arrival, the house had been helmed by Tomas Maier for 17 years and had built a strong identity for reliable, if safe, luxury. It was a rule book that Lee respected but rewrote with his first collection. The fashion industry raced to be the first to shoot it, Instagram blew up with adoration for it and waiting lists amassed before product hit the shop floor.

His mechanism for handling such immediate attention and interrogation, he said, is one that many creatives will identify with: he retreated.

“This last year has been intense, I haven’t gotten out much,” he smiled backstage, adding that in the lead-up to this outing he has remained quite insular. It was aided by the fact that he doesn’t have Instagram so is sheltered from the hype.

Of course Lee – who previously worked in the design team at Celine – has something on his side that he didn’t have last season: the benefit of hindsight. He knows what his Bottega customer wants because they have been all-consuming of it. Composed and humble in person, the quiet confidence he now possesses showed in this second collection.

Leather, the brand’s USP, dominated throughout, from the first paper-thin asymmetrical dress to the black boiler suits, hooded anoraks and belted trenches, all of which were lightweight, being a spring/summer collection and waterproof. He’s a Brit after all.

As well as being a texture-fest, key looks included a trio of cowl-neck sequinned dresses in zingy tomato red, gold and blue and a duo of halterneck scarf tops with pineapple and Matisse-inspired monkey prints. The latter was to have “something that felt cheeky. A lot of the collection felt quite graphic and prints are something that I’ve felt interested in since the beginning.”

They were, he said “clothes to live in … solidifying the icons and the things that we’ve become known for” but rooted in “the reality of dressing and close to living”. While it won’t be everyone’s idea of everyday clothes, no less the former Bottega customer, Lee’s growing fanbase says otherwise.

The most popular pieces from his last collection were unquestionably his slip-on leather heels and he continued what is sure to be a winning streak today. This time they featured the unique woven method called Intrecciato which the brand owns and has purveyed for years. Bags – another brand staple – came in the same design. The classic hobo bag was given the XXXL treatment and came slung around the body, while moulded wooden box clutches were new.

“Every collection so far has felt an evolution to what we’ve ever done before. Since I first met with [Bottega Veneta owner and Kering CEO] Francois Henri Pinault and was deciding what I wanted it to be, its felt like a constant evolution.”

While financial confirmation of his work is yet to be posted, the palpable sense of its success will be assuring Pinault he has backed a winner with Lee’s appointment. In the midst of a month’s worth of shows, highlights like this stand out.

“I want to be bold – otherwise what’s the point?” reasoned Lee. “I want to make a statement – I don’t see the point in making fashion that doesn’t say something. You love it or you hate it but that’s human nature.”