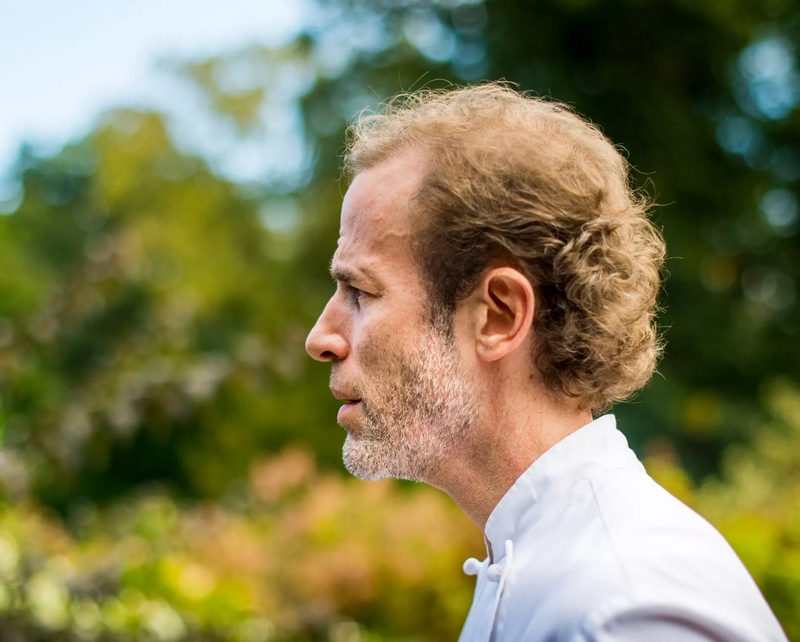 “How does it taste?” says Dan Barber, regarding me expectantly in the garden of Blue Hill at Stone Barns, his restaurant in the Hudson Valley just north of New York. I am gnawing the crust of a large piece of bread that has been grown from Barber Wheat, a hybrid seed developed by Barber and his partners to be nutrient dense, high in yield and – a radical thought in seed breeding, apparently – full of flavour. (Whereas clapped out old seeds might yield 30 bushels an acre, Barber Wheat will stretch to 95). The bread is simultaneously light, and dense, and intricate in flavour in such a way that I can’t think of a single word to do it justice. Barber, who at 49 has the manic energy of someone for whom no plate of food will ever live up to the ideal in his head, looks at me gloomily. “That’s the whole problem with food writing,” he says.

There are bigger problems in the food world. With the possible exception of “financial regulation”, there can be few more deadly phrases to the casual reader than “sustainable agriculture”, a heavy-weather issue most of us recognise as increasingly important but nonetheless killingly dull. This is where Barber, who set up his restaurant in 2004, is hugely persuasive, a charismatic leader who, if you talk to him for an hour while walking around the kitchen and bucolic surroundings of Stone Barns, will have you genuinely excited about crop rotation, and soil conditions, and the fact that the food industry is a dying behemoth reliant on low-yield, agronomically risky seeds that produce ever more tasteless and nutrition-less food.

“There’s never been a time where there’s been such a wholesale decline in frozen processed food,” he says. “Ever. The only units of those companies that are actually increasing market share are prepared vegetables that are not processed.” Which isn’t to say we are all rushing into the open arms of the nearest farmer’s market, although it is Barber’s mission, through his restaurants, to change this.

Blue Hill, often cited as Obama’s “favourite restaurant” and with a branch in Manhattan, serves audaciously un-gussied up food that relies almost entirely for its flavour on its extraordinary provenance, from seeds bred by Barber’s seed company, Row 7, or from nearby farms committed to the best soil practices. The phrase “farm-to-table” has become something of a target in the last few years, “dismissed as pretentious and idiotic” as Barber says, and redolent of smug city dwellers fawning over a tomato. The chef prefers the terms “local” – “you can’t co-opt ‘local’; I mean, someone will figure out how, but it’s pretty hard” – or “seed-to-table”, since if the seed is no good, he says, everything that follows will be compromised

The problem for Barber is not one of product, but perception; many of us expect healthy eating to entail a large dose of sacrifice. This is wrong, says Barber; food grown in nutrient-dense soil simply tastes better. “The change agent is deliciousness and hedonism. In many ways I think that’s why the good food movement, or farm-to-table, has had such legs: it’s rooted in hedonism. What movement can you speak about where it asks you to be greedy? Look at the environmental movement: give up everything. Or religion. The food movement is about something that Americans are really good at.”

Eating? “Well, pleasure. We’re actually really not good at eating. But to the extent to which we can change culture through hedonism, I think there’s a real art to that. It’s just hard for Americans who come from the puritan idea that everything that’s virtuous requires sacrifice. It’s hard to talk about these serious issues in the context of pleasure and delight.”

The flip side of this is that when Americans find something they do like or believe to be good for them, they can have trouble organising a proportionate response. I tell Barber I went through a brief phase of believing that chia seeds would save me.

I am currently in the sheets-of-seaweed phase, although I’ve read that in high volumes it might be carcinogenic. He rolls his eyes.

“That’s why in all these [older food] cultures, you couldn’t eat too much of anything. That luxury was never afforded to anybody, ever.” The problem in America is one of abundance, and it directly inhibits diversity. “In all of my research about healthfulness, everything points to diversity. Because the amazing thing is that we actually don’t know what makes us healthy. It’s probably because there’s a million different things – there is no magic bullet. That’s the great lesson of different cultures that look to their region to develop this correspondence between what the land is telling you it wants to grow according to soil conditions, climate, and your diet. To me, that’s the ticket. You can never really understand these things by single bullet solutions – the omega 3s and seaweed – because we don’t know how it soaks into our system based on the other things we’re eating. That’s cuisine. But it’s hard to plan an economy on eating lots of diverse stuff.”

In South America, quinoa has driven thousands of farmers off the land

The main advantage of US food culture is that it is extremely light on its feet. “Who else is nimble?” says Barber. “Japan, France? Italy?” He laughs. “To introduce a new idea in those cultures? It’s impossible. But we do this.”

There are some startling examples of popular products that effectively took off overnight after having been introduced by chefs at the top. “Look at Greek yogurt,” says Barber. “That came from chefs who were looking for a richer taste. Or look at quinoa, or sushi. All of these things that have become mainstream, started up high. Twenty years from now you’re going to be eating fast food crickets, or whatever it is.”

Or, says Barber, “think about coffee. Fresh milk coffee: when I was growing up, you had it in a can, you would never pay $6 for a cup of coffee. But that started with a delicious cup of coffee; yes, there are a lot of other reasons for its success, but it was based on just the fact that once you tasted a deliciously fresh, brewed cup of coffee, no one would go back. And that happened overnight, and it’s the same with Greek yogurt.”

The biggest and most impressive example of how individual demand for better taste can move the mass market and have a large-scale effect on agriculture is, believes Barber, craft beer. “Ten years ago, craft beer was 5% of the market. Today it’s 39% of the market and it’s growing rapidly. So Coors, and Anheuser Busch and all those big companies don’t know what the hell they’re doing. They’re buying all the craft brewers, is what they’re doing. And the root of that is that these craft breweries demanded good taste in beer, and you get that from barley malt. If you grow barley and malt it, that’s the base of your beer. Well, now, all of a sudden farmers growing barley have gone from zero to 60 overnight. And barley is an incredibly important soil supporting crop. So, these farmers who used to do all wheat or corn or soy, are doing barley. That’s an example of how these ideas can scale overnight.”

One of the problems with this kind of rapid uptake in otherwise beneficial produce, is waste. The Greek yoghurt boom has created an effective whey lake, the yogurt by-product that “in large amounts becomes very toxic. What do you do with all this whey? If you were in a different culture, you didn’t waste the whey. You had your greek yogurt, marinated your lamb that used up the whey, and that’s the cuisine. But in America we don’t have that.”

In the case of quinoa, “now indigenous farmers in South America can’t afford quinoa because the price has gone up so much. It has driven thousands of farmers off the land.”

The organic food movement entails a lot of waste as farmers rotate crops to rejuvenate the soil, “but since there’s no market for the other crops, they throw it into bag feed and lose money. That’s insane. That’s why organic food is so expensive. If you want to democratise the food system, you should be eating the diversity – the lowly soil supporting crops that organic farmers are forced into buying.”

It’s a question, says Barber, of “who’s advocating for the ryes and the barleys and the millets?” That is where the job of the chef comes in and much of Barber’s time is spent doing what feels like a series of maths problems: how to create delicious food from ostensible waste products that support the crop rotation necessary to rejuvenate the soil. Only the chef can do this, he says; obviously the supermarkets won’t.

“Restaurants can become these cathedrals of ideas. Back in the day, traditional cuisines did that for food. They figured it out and passed it on, so that you ate certain things at certain times of the year. We were just never forced into those negotiations, because we were so plentiful. We came over here and it was like the garden of Eden.”

The point is, says Barber, that joining the dots between products is what he’s there to do, “and that’s where the pattern of cuisine becomes so instrumental. And who puts those pieces together? That’s when it comes back to the restaurants. At a restaurant you’re like a conductor in an orchestra. You’re putting the stuff together in ways that nobody else can, or will.”

The night after our conversation and back in New York, I visit Barber’s city branch of Blue Hill and taste many of the things I saw him discussing with his kitchen staff the day before, using all the sustainable methods he spoke of: raw beets sliced wafer thin and marbled with purple veins; spear-harvested black fish; mushroom “nuggets” that taste better than chicken. There’s no point in trying to describe this stuff. But taste it, and you’ll never turn back.