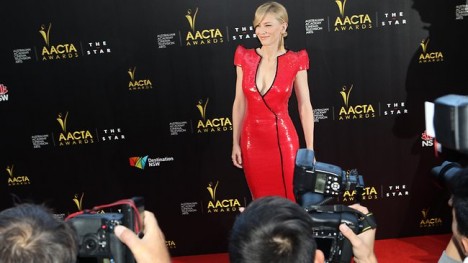 Australian actress Cate Blanchett is reportedly set to shoot a series of fragrance campaigns for Giorgio Armani, joining the Beckhams, Beyonce, and Megan Fox, who al all have been in the position of Armani ambassadors.

Reports suggest that Cate Blanchett, a regular contender on Armani star-studded front row shows, is already a muse for the designer. She will front her first fragrance campaign for a whopping $10 million.

Cate Blanchett came to international attention for her role as Elizabeth I of England in the 1998 film Elizabeth and has earned several accolades, including a star on the Hollywood Walk of Fame, two Screen Actors Guild Awards, two Golden Globe Awards, two BAFTAs, and an Academy Award.

In March, Giorgio Armani celebrated the opening of the new Giorgio Armani store in Hong Kong on Canton Road. A selection of hand drawn sketches from the Eccentrico Exhibition were revealed for the occasion. The luxury house also marked the opening of the first Emporio Armani flagship store exclusively dedicated to watches and jewelry recently opened on Queen’s Road, the heart of Hong Kong’s business & financial district. The interiors have been carefully conceived and designed by Giorgio Armani and his team of architects in Milan, to give the space a modern, casual look.