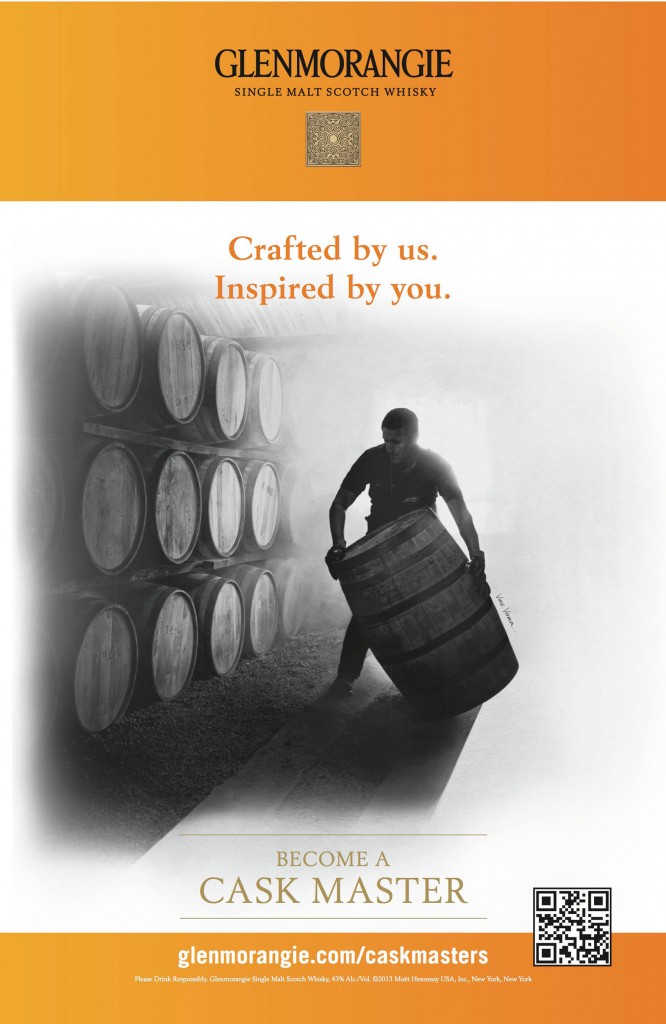 For the first time in its 170 year history, Glenmorangie is giving whisky aficionados the opportunity to inspire the creation of the next Glenmorangie Single Malt Scotch Whisky. During 18 month ‘Cask Masters’ program fans will be able to vote for their favorite of the three maturing whiskies, will be involved in the naming of the new product, will help decide the packaging and design, will choose the photographic style that will bring the new expression to life, and, finally, will attend the global launch event & help select its location.

Consumers will be able to join Dr. Bill Lumsden, Director of Distilling and Whisky Creation at The Glenmorangie Company, to a five stage journey where their opinions and votes will determine the development of the new single malt scotch whisky for release in late 2014. The winning dram will be chosen from three different aging outstanding whiskies that are nearing the end of their maturation in various casks at The Glenmorangie Distillery.

Dr. Lumsden has already revealed his selection of the three rare whiskies to a group of leading international whisky experts, who have all independently offered their initial views on his selection.

“This is a very bold move for us – for years we have listened to fans of the brand and their views and reactions to the whiskies we have introduced. “Now it’s their turn to become truly involved and I hope as many whisky aficionados as possible around the world will be able to join in and enjoy each stage of this exciting journey,” confessed Dr. Bill Lumsden.

“This is the natural next step for Glenmorangie. We have always been at the forefront of innovation regarding our whisky creation so now we are simply leveraging crowd sourcing’s immense capabilities to make it more accessible for our consumers. Instead of keeping the whisky creation process behind closed doors, Cask Masters allows us to harness the enthusiasm and passion of our Glenmorangie aficionados and reward them with an insiders’ pass to the lengths we go to craft our whisky,” added Maxime Balay, Senior Brand Manager of Glenmorangie.