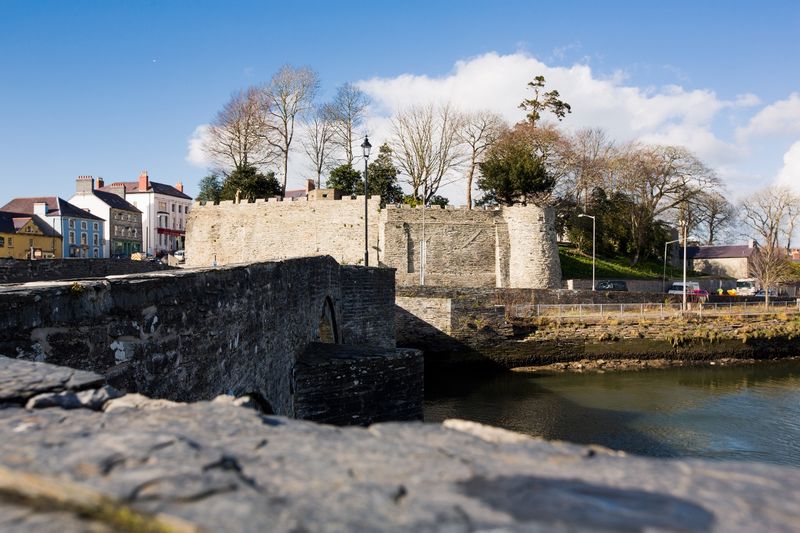 This article titled “Cardigan Castle to reopen after £12m restoration” was written by Steven Morris, for The Guardian on Tuesday 14th April 2015 12.01 UTC

The medieval walls had crumbled, the elegant Georgian house within them had decayed and the gardens were an unkempt shadow of their Regency glory.

Fifteen years after the people of Cardigan in west Wales began the battle to save their historic castle they are finally able to roam the grounds again and enjoy the lovingly restored site.

Around £12m has been spent on reviving and preserving the castle, the scene of fierce battles over the centuries but also important cultural events.

After a sneak preview for residents on Tuesday, Cardigan Castle is officially opening to the public on Wednesday. As well as offering an insight into 900 years of history, the castle will feature luxury accommodation, a riverside restaurant and a summer events programme.

The campaign to save the site was led by the Cadwgan Building Preservation Trust, which was formed in 1999 by volunteers and has grown to include more than 250 members.

It secured more than £6m from the Heritage Lottery Fund and £4m from the European Regional Development Fund. Residents dipped their hands in their pockets and organised events to raise more than £200,000 themselves.

Sue Lewis, Cardigan Castle spokesperson, said: “After more than a decade of campaigning, the whole community is of course ecstatic to see Cardigan Castle returned to its former glory.”

After the original building was captured and destroyed, a new castle was constructed by Rhys ap Gruffydd (Lord Rhys) in the 12th century – the first stone castle built by a Welshman. To celebrate its completion, Rhys hosted what is generally accepted to be the first Eisteddfod, a celebration of Welsh cultural life that continues to thrive..

A permanent Eisteddfod exhibition will be one of the attractions of the restored site and an over-sized sculpture of an Eisteddfod chair – the chairing of the bard is an important element of the celebration – will be on display.

The site has an eclectic range of styles. Castle Green House was built within the castle at the start of the 19th century and was the home of Barbara Wood, the daughter of a shipping magnate, until it fell into disrepair in the 1980s.

Wood moved into a caravan in the grounds before selling the castle, a move that triggered the huge restoration project.