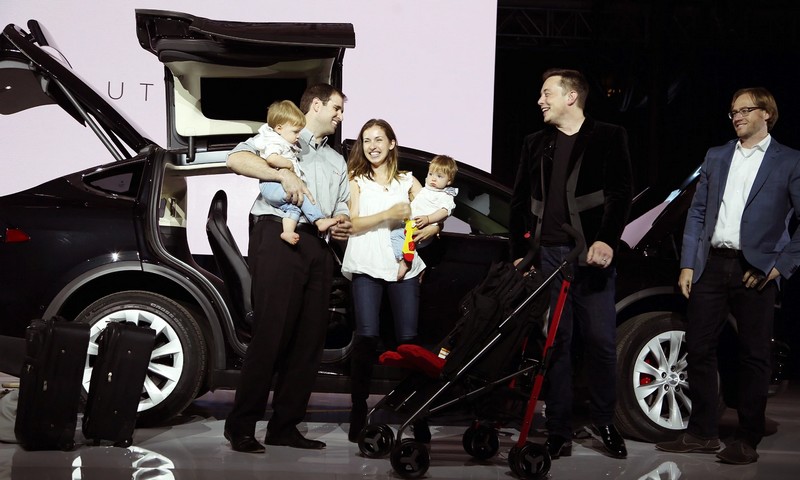 This article titled “Can Tesla downshift from $130,000 SUVs to mass market electric cars?” was written by Benjamin Preston, for theguardian.com on Wednesday 7th October 2015 14.59 UTC

On 21 September, Tesla’s chief executive and founder, Elon Musk, used all the tricks in his showman’s book to launch the company’s latest all-electric vehicle, the Model X, at the company’s San Francisco Bay headquarters.

Tesla’s mission, he said, is to “accelerate the advent of sustainable transport”, hoping that the new SUV will help the company appeal to a wider audience of American motorists. But with its $130,000 price tag, the Model X could end up having an awkward relationship with sustainability.

Americans bought 529,817 SUVs and crossovers in September – a 30% increase over September 2014 – so building an electric vehicle (EV) to fit the un-electrified large crossover segment seemed to make good sense for Tesla. But even beyond its unique status as an EV, the Model X is not a typical crossover. It’s probably the world’s first mass-produced EV crossover, but it’s much too expensive to be anyone’s idea of a mass market vehicle.

From technological and design standpoints, the vehicle is impressive, so its enthusiastic reception among the motoring press makes plenty of sense. The third vehicle to appear in Tesla’s social media-burnished 12-year history, the Model X enters the automaker’s lineup alongside the sleek Model S sedan. Together, the two luxury EVs represent the best that moneyed environmental do-gooders (or those who want to appear as such) can buy. They are the physical manifestation of their creator’s bold view of the future – vehicles for a world where fossil fuels no longer matter.

“For many people who have a lot of money, buying a Tesla is as much buying into Elon’s vision as it is about the product,” Brett Smith, an analyst with the Center for Automotive Research, said in an interview. “You become part of something great.”

In addition to its good looks, the Model X comes with a host of semi-autonomous features. Among them are emergency automatic braking Tesla says will even work at high speed, an automatic steering function the automaker says will monitor lane lines to keep the vehicle in its lane without driver input, and automatic parking. A suite of radar and sonar sensors and a forward-facing camera make the technology possible, and Tesla says periodic software updates will automatically upload improvements to the systems over the airwaves.

Then there are the falcon doors, a Back to the Future fantasy come true in a car that can haul more that just two radiation-suited plutonium thieves. The rear doors, often a design problem from an ingress-egress perspective in four-door, three-row vehicles, fold up and toward the center of the vehicle. Sensors keep them from banging into things. Single support seats swivel out of the way for passengers bound for the third row, improving accessibility over conventional setups. Plus, the doors look cool.

As with the Model S, there’s a “Ludicrous” version of the Model X. While the standard Model X will go from zero to 60 miles per hour in 3.8 seconds, a Ludicrous upgrade on the performance model nudges that elapsed time down to 3.2 seconds as the vehicle rockets to a top speed of 155mph. The front and rear wheels are driven by separate motors – a 259-horsepower unit up front and a 503-horsepower one in the rear – and Tesla says they crank out a combined 713 pound feet of torque.

All that twisting force gives the Model X a 5,000-pound towing capacity, a capability similar to many pickup trucks. Tipping the scales at 5,441lbs, the Model X is about as heavy or heavier than most full-size pickup trucks, too. For comparison, the 2016 Chevrolet Corvette Z06, one of the fastest sports cars on the road, boasts a 650-horsepower supercharged gasoline V8 engine that produces 650 pound feet of torque and will carry the 3,500-pound car from zero to 60mph in 3 seconds.

In keeping with Tesla’s reputation for building cars the well-heeled will appreciate, the Model X is imbued with a number of luxurious touches. Intuitive doors open automatically for the driver, and the infotainment stack features a massive 17-inch display screen. The little road noise allowed to enter the cabin will be moot against the Model X’s 17-speaker stereo system. Interior air is purified for the Tesla elite, with a Hepa filter system that ducts air in through the vehicle’s front fascia.

If all that sounds unattainable for most people, it absolutely is.

“The Model X expands Tesla’s product portfolio, but at $130,000, it’s a very niche product,” Smith said, adding that the automaker’s real challenge would be in making the jump to producing and selling a mass market model. “It will still be a huge challenge for Tesla to make a profit at such low volume with so much invested in development. Until they get some real volume to spread out all of that development cost, it’s tough to think of it as a profitable company.”

Akshay Anand, an analyst at Kelley Blue Book, said that the Model X could spur other automakers to build electric crossovers, and could even boost overall EV sales. But he agreed with Smith that the Model X, while impressive, won’t have the impact that a real mass market vehicle could have.

“The EV SUV segment is something that needs to happen,” he said. “We’ve seen EV sales dip. In addition to range anxiety, there have also been only sedans and compacts on the market.”

Tesla Motors has two notably huge promises to fulfill: the mass market-oriented Model 3 and the Gigafactory – a large battery production facility. Musk said last month that the Model 3 would be unveiled next spring, with production to begin in 2017. The Gigafactory is under construction in the Nevada desert and isn’t expected to be operational before next year.

“With the Gigafactory, there’s a lot of uncertainty as to what it’s going to do for Tesla,” Smith said. “If it gets them higher scale, that’s important, but I’m not sure that it will get them a truly cost-competitive battery.”

As Tesla works on the Model 3, its competitors are also busy. At the Detroit auto show in January, General Motors introduced the Bolt, an electric compact it said would drive 200 miles on a charge, at a price point closer to $30,000 after alternative energy tax rebates. Nissan has also promised an improved version of its Leaf EV, one at last capable of triple-digit range. GM has also beefed up the Chevrolet Volt, a gas-electric hybrid that compromises on pure electric driving to bring the technology within reach of a wider array of potential customers. With 60 miles of pure electric driving range, it can also travel more than 350 miles on a gas-powered generator – much farther than any of the more expensive Tesla models can go.

Only time will tell if Tesla is able to live up to its grand promises, but for the time being, Smith said he thinks Musk has been more or less on target with other goals. Bearing that in mind, there’s a good chance the automaker could hit its broader production goals, too.

For now, the Model X tickles America’s crossover fancy, if at a distance for most car shoppers. As fuel prices increase, truck, SUV and large crossover sales are likely to fall and hybrid and EV sales to rise. With the stars aligned in such a way, a mass market car from Tesla could help the company prove that it truly is a game changer.