The Royal Academy of Arts is 250 this year and Royal Mail is marking this landmark anniversary with a set of six Special Stamps, each designed by a revered artist and Academician, together with a selection of collectibles and souvenirs. 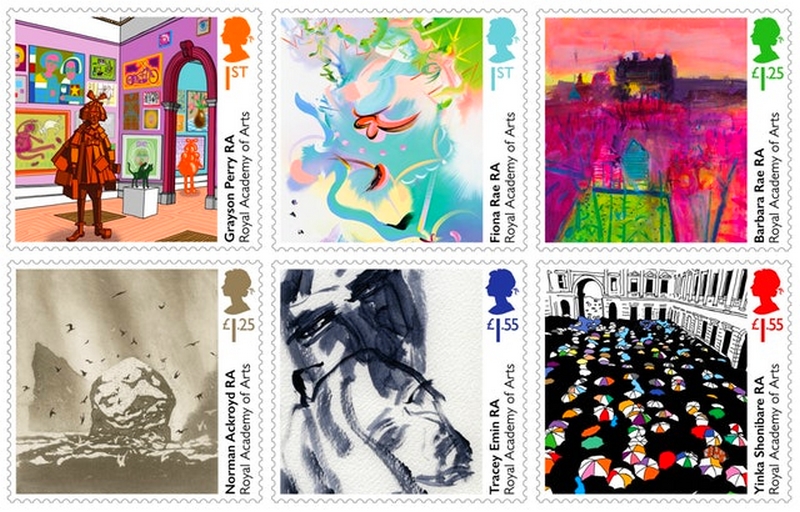 This article titled “Buy a masterpiece for 67p! New stamps by Tracey Emin, Yinka Shonibare, Grayson Perry and more” was written by Andrew Dickson, for The Guardian on Wednesday 23rd May 2018 23.01 UTC

If your heart is set on acquiring a work by Grayson Perry, Yinka Shonibare, Fiona Rae or Tracey Emin, it would normally involve a painful conversation with your bank. Owing to a bullish market in contemporary art, Perry’s pots currently go for upwards of £150,000 each, while an Emin neon is likely to set you back £70,000-plus. Earlier this spring, a Shonibare sculpture, one of the Girl Balancing Knowledge series (2015) – life-sized, fibreglass, wearing a sky-blue dress crafted from the artist’s trademark Dutch African print – went for £236,750 at Christie’s in London, £150,000 more than the auctioneers were expecting.

From early next month, however, there is a more affordable option: pop down to your local post office. To mark the 250th anniversary of the Royal Academy – which this month unveiled its £56m expansion – these four artists, plus the painter-printmakers Barbara Rae and Norman Ackroyd, have been commissioned to create a set of special stamps. A self-portrait by Perry and an abstract work by Fiona Rae will set you back 67p each (UK first class). Emin’s and Shonibare’s can be had for £1.55 (Europe standard delivery). You could indulge your wildest collecting impulses and snap up the full commemorative set, and still have change from a tenner.

With the possible exception of Star Wars (a 2017 set) and the Mr Men books (2016), the Royal Mail is not known for its commitment to cutting-edge artistic practice. The last time it devoted special stamps to the art world, it was to celebrate 150 years of the National Portrait Gallery in 2006, and the painters featured included Joshua Reynolds and Walter Sickert. The hope is that the new set might look more distinctive, not to mention contemporary. It is surely the first time former YBAs find themselves in the company of Sustainable Fish (2014), Classic Locomotives of Northern Ireland (2013), Wallace and Gromit (2010) and British Army Uniforms (2007).

Sitting in a corner of his east London studio, next to a scale model of the ship in a bottle he installed on Trafalgar Square’s fourth plinth in 2010, Shonibare seems pleasantly bemused by the fact that a bespoke work of his is soon to glorify millions of letters up and down the land. “It’s not something you ever think you’ll do, to be honest,” he says. “It depends how you measure it, but in a sense it must be the biggest public art commission I’ve ever taken on.”

Shonibare’s design originated two years ago, with a commission at the other end of the physical scale – the task of producing a 71-metre-long “wrapping” for the scaffolding that swaddled the RA’s Burlington Gardens building while the builders were in.

That work was a collage of photographs drawn from the RA’s archive, illustrating the academy’s history. One of the images Shonibare dug up was a shot of a crowd queueing patiently in the rain to see a Turner retrospective in the 1950s: a quintessentially British jumble of umbrellas seen from above, captured by an unknown photographer. Visually appealing as well as a droll comment on our national obsession with the weather, it seemed a good fit for the job. “I just really like the graphic, the perspective, the reduction,” he says.

The Royal Mail gave the artists more or less free rein, with the caveats that the work couldn’t be offensive or push a political agenda (“which was slightly tricky for me,” Shonibare laughs, “because politics is what I do”). But the most fearsome challenge was the obvious one: making an image that would be legible at a scale not much larger than a thumbnail.

Shonibare began by distilling the photograph down to its essentials, reducing the RA courtyard to mere outlines and the crowd to a ground of intense black. Only the outlines of the umbrellas are left, which the artist has livened up with cheerful splodges of colour – apricot, scarlet, emerald, cornflower. One umbrella, in the bottom right, is emblazoned with the African print that figures in nearly all his work.

“You’ll need to look really hard to see it. But that’s the thing about designing a stamp: it’s so intense, it really focuses the mind. You have to say a lot in such a small space.”

The six artists have responded to the constrictions of the form – 37mm by 35mm, including perforations – in a variety of ways. While Ackroyd and Barbara present pictorial landscapes, both Scottish (Edinburgh Castle and a sea stack in the Outer Hebrides respectively), Emin offers a tautly concise study done in black gouache. Its subject is even more intimate: entitled Saying Goodbye, it depicts her dying mother.

Perry’s, meanwhile, is a witty take on the RA’s summer exhibition, presenting highlights from his own oeuvre reinterpreted as if by other artists – a statue of his alter ego, Claire, constructed in the blocky style of Eduardo Paolozzi; a Warhol-ish image of one of Perry’s own motorbikes. A tiny mock Jeff Koons hovers in the background. “It’s a kind of self-portrait, as all art is,” he says.

The most abstract of the lot is Fiona’s, which features the bubblegum-bright palette and swooping brush strokes of her recent paintings. Though this is the first stamp she’s ever designed, Fiona admits she has long dreamed of this moment: as a child, she was an ardent collector, hoovering up stamps from Australia and communist China, many of which she still possesses.

Before beginning to work on her design – painted in oils on a canvas 61cm by 49.5cm, photographed, then shrunk “like something out of a Hollywood movie” to see whether it still had visual presence – she pulled out her old stamp books and ransacked them for visual inspiration.

“It’s a bit like writing a poem rather than a novel,” she observes. “It’s this tiny world: you have complete control. Everything is in easy reach. But you have to make every gesture count.” Might her design find its way into her personal collection? “God, yes!” she laughs. “I really want to see an envelope addressed to myself with my own stamp on it. Totally tragic, isn’t it?”

Which raises the obvious point: to say stamps are an under-regarded artform is putting it mildly. Most of us barely register the images that decorate our postage; phalanxes of magnifying glass-wielding collectors don’t make the world of philately seem much more appealing.

It’s time we gave stamps their due, argues the graphic designer and philatelist Blair Thomson. An Instagram feed set up by Thomson, Graphilately, showcases designs from countries including Brazil, Soviet Russia, Mexico and Japan – marvels of miniature modernism. It now has over 87,000 followers, and has even spawned its own book, the lovingly produced Graphic Stamps (2016).

The form’s humble functionality is what makes it appealing, Thomson argues. “It’s somewhere between design and art; you’re capturing a moment, trying to communicate a message. The best stamp designs make you feel something.”

While most national postage services play it safe – commemorating anniversaries and public figures, or marking scientific or technological achievements – occasionally designers are permitted to be more adventurous, particularly outside the UK. Says Thomson: “The most interesting ones are often the most abstract, or which experiment with the limitations of the form, or make playful use of typography or layout. There’s real poetry in producing an elegant stamp design. They deserve to be noticed much more.”

Some artists have done exactly that. In the 1930s Kurt Schwitters constructed collages incorporating ephemera such as stamps and pieces of torn-up envelope, while Robert Watts, a member of the avant-garde Fluxus collective, created hundreds of unofficial stamp designs, many of them jubilantly pornographic.

The most famous exponent of “mail art” was the American Ray Johnson, who from the 1950s onwards posted sketches and doodles to other artists, many of whom he’d never met. The idea was that they’d add their own embellishments, transforming it into a kind of collaborative art – a witty response to the serendipity and unpredictability of the postal service.

Alighiero Boetti sent envelopes to fictional addresses, making its journey the subject of the work

Perry is a particular admirer of the Italian arte povera artist Alighiero Boetti, who in the 1960s and 70s used stamps to make obsessive collages and dispatched envelopes to fictional addresses, making the journey that an object took through the mail into the subject of the work. “He did really interesting stuff – he got people to send letters backwards and forwards: they’d build up stamps and labels.”

For herself, Fiona admires the democracy of the form, not to mention its humanity – the way stamps are available to anyone, can be sent anywhere reached by the postal service and are affixed to messages of every kind, from a rapidly jotted postcard to a painstakingly crafted love letter. “It’s a way of owning a little bit of art, a tiny print, in a way. They’re a huge part of our cultural life.”

But part of the attraction, she adds, is that stamps do so often go unnoticed. “They’re part of the flotsam and jetsam of what surrounds us every day. There’s something beautiful about that.”