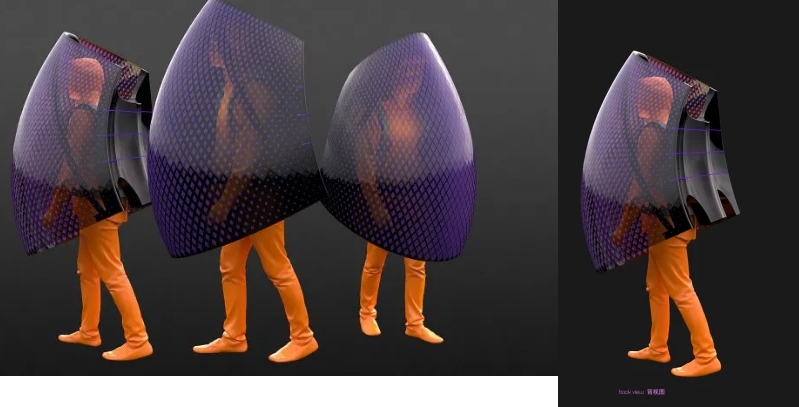 This article titled “Bubble suits and distance-friendly hats: Covid-19 fashion steps up” was written by Ellie Violet Bramley, for The Guardian on Friday 19th June 2020 16.19 UTC

With facemasks quickly becoming part of everyday style, a wave of new designs are feeding into the vogue for social-distancing fashion. This week as part of the Central Saint Martins graduate show, Harry Styles-approved designer Harris Reed presented a roundabout-wide hat and crinoline skirt, while as part of last week’s digital London fashion week, Westminster student San Kim showcased Protective Garments for Coronavirus made from M&S and Poundland bags.

Other recent ideas for social distancing clothing range from bubble suits for commuters to massive European size 75 shoes. As their designer, Grigore Lup, told Reuters: “If two people wearing these shoes were facing each other, there would be almost one-and-a-half metres between them.”

There are also homemade efforts. Instagram account WhatIsNewYork has been cataloguing instances of social distancing outfits in the city, from wire structures to plastic bubbles. In one cafe in Germany guests were asked to wear “pool noodle hats” in order to maintain distance. The hats mirrored those worn by some children returning to school in China.

Supersized silhouettes might have found an unfortunate new relevance in the age of the pandemic but, from the giant straw Jacquemus hats that “won” 2018 to the frou-frou dresses of Molly Goddard, they have been appearing on catwalks for the last few years.

As part of the spring/summer collections, Balenciaga led the charge, championing dresses wide enough to register on radars; Thom Browne’s skirt hoops featured alongside panniers; while at Puppets and Puppets dresses came with bulbous bottom-halves. For autumn/winter brands such as Marc Jacobs and Maison Margiela, where designs riffed on beekeeper outfits, as well as Moncler’s voluminous Richard Quinn collection, all presented space-filling designs.

But clothes as distancing tool, whether for disease prevention or otherwise, are not new. “Clothing has long served as a useful way to mitigate close contact and unnecessary exposure,” wrote historian Einav Rabinovistch-Fox recently.

While Victorian-era crinoline skirts were, she added, “used to create a barrier between the genders in social settings”, they “probably inadvertently helped mitigate the dangers of the era’s smallpox and cholera outbreaks.”

Clothing to help ward off disease is not without historical precedent. In the 17th century, for instance, doctors wore beaked masks when examining plague patients, the noses stuffed with herbs as well as viper flesh powder and honey.

While XL silhouettes have been big on catwalks, is it likely that, with social distancing in mind, something similar may filter down into everyday clothes?

“I do think that in the immediate future social practice around clothing will change,” says milliner Veronica Toppino, who has recently designed architectural Structure hats, as wearable art rather than ready-to-wear. “It is already changing if we think about the cloth-mask.” But while she thinks projects like hers make us “reflect on fashion as a tool to investigate new ideas”, she doesn’t expect people to be wearing them anytime soon.

“It will be interesting to see,” says the fashion historian Alison Matthews David. “It’s hard to say now because everything is moving so quickly but it does become appealing in a new way, the idea that you could use, in a non-verbal, physical way, a ‘keep your distance’ approach.”