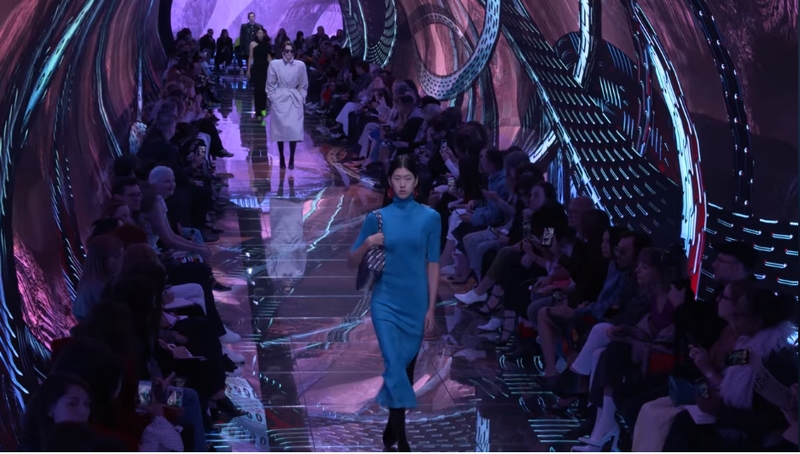 This article titled “Balenciaga breaks fashion taboos in Paris on way to bigger picture” was written by Jess Cartner-Morley, for The Guardian on Sunday 30th September 2018 15.19 UTC

Balenciaga stands for the weirdly elegant and the beautifully odd. Its founder, Cristóbal, gave fashion the puffball skirt and the sack-back coat. On Sunday morning at Paris fashion week its current designer, Demna Gvasalia, offered cocktail dresses suspended on boned straps so that they hovered in space around the body, and broke the design world’s last remaining taboo by cutting-and-pasting the storied Balenciaga name into Comic Sans font.

Gvasalia’s take on Balenciaga, where he has been in charge for three years, is like the new album you wish your favourite band would make. Not a lazy rehash, but not throwing the baby out with the bathwater either. Like Cristóbal Balenciaga, Gvasalia is obsessed with silhouette. He has pulled puppet-strings behind the trends for hoodies, for oversized coats, for leg-hugging sock boots.

The first looks on to theis catwalk had an hourglass shape to the waist. Not tight, though: like the house founder, Gvasalia is more interested in shadowing the shape of the body than cinching it. The shoulders that sat haughtily square and wide, as if hung from a spirit level. In fact, they were almost weightless, moulded using a new form of 3D printing developed by the ateliers.

“I think about comfort a lot,” said the designer backstage after the show. “What we do here is a luxury product. It costs a lot of money. I think it is only right that I give as much intellectual input as possible. I think about what makes a suit feel approachable and relevant. We work on the fabric so that you don’t feel too hot.”

The catwalk snaked around narrow blacked-out passages with railway-tunnel curved ceilings. All surfaces were tiled with screens running an immersive video installation by the Canadian artist Jon Rafman.

Guests took their seats under raindrops rolling soothingly over glass. Then an error message flickered, and the visuals switched to thunderous waves, then rolling lava. And then the rules of physics dissolved altogether as a kaleidoscope of skyscrapers tumbled all around, looming and vanishing like a pack of cards being settled.

Gvasalia is a provocateur, and much was designed to unsettle. The Balenciaga logo was tabbed vertically on to a shoulder seam so that it stood proud, like a shark fin. A sparkly Eiffel Tower print had a Rue de Rivoli coarseness that poked fun at the pearl-clutching refinement of the Paris fashion establishment. An emerald cocktail dress with slim caped shoulders gave a sharp, digitally moulded update to Balenciaga’s signature cocoon shape.

Suddenly, an audience who had spoken of nothing but Hedi Slimane’s controversial Celine debut over the weekend had a great deal more to discuss. Celine was about what happens in Slimane’s head; Balenciaga was about fashion’s bigger picture.