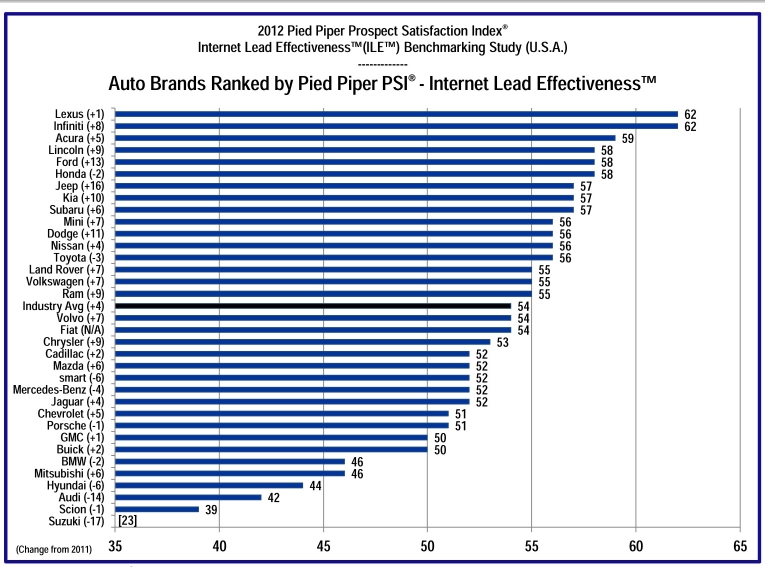 Auto dealership responsiveness to customer inquiries received over the internet is the object of study of the latest Pied Piper
Prospect Satisfaction Index Internet Lead Effectiveness Benchmarking Study. The rankings by brand were determined by the patent-pending Pied Piper PSI process, which ties “mystery shopping” measurement and scoring to actual industry sales success.

Lexus, Infiniti and Acura dealerships were ranked highest in the 2012 study. Industry-wide performance improved substantially from 2011 to 2012, with two-thirds of the 34 auto brands recording higher scores, but despite the higher scores there remains plenty of room for improvement. In 2011, dealerships on average responded to customer inquiries within 24 hours 64% of the time, improving to 78% of the time on average in 2012. However, the 2012 results suggest that nearly one-in-four of today’s customer internet inquiries remain unanswered after 24 hours.

Ford Motor Company and Chrysler Group LLC brands showed the most improvement from the previous year, with Ford, Lincoln, Chrysler, Dodge, Jeep and Ram dealerships improving the most, along with Kia dealerships.

Brands which performed poorly in the rankings almost always start with a problem of too many “zero responses,” where not even an auto responder message is received, let alone a personal follow-up. The top 10 brands limit “zero responses” on average to 5% of the time; vs 19% of the time on average for the bottom 10 brands.

The 2012 Pied Piper PSI Internet Lead Effectiveness Benchmarking Study (U.S.A.) was conducted between September 2011 and March 2012 by submitting internet inquiries to a sample of 4,331 US dealerships representing all major brands.