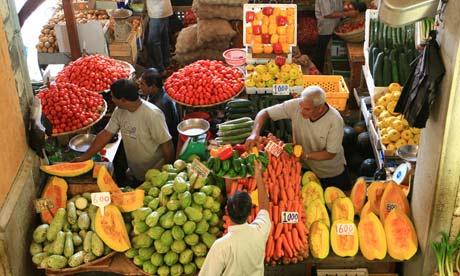 This article titled “Angela Hartnett’s Creole kitchen in Mauritius” was written by Lucy Cavendish, for The Observer on Saturday 28th April 2012 23.05 UTC

Angela Hartnett and I are sitting under the canopy of a small restaurant called Resto Sept in the depths of the Mauritian countryside. It consists of nothing more than a few tables, some plastic chairs and a bar.

We have ventured out from the grand but lovely enclave of the Belle Mare Plage hotel in search of… well, something more Mauritian. Back in the UK, Hartnett’s Italian-style food has garnered her praise and a Michelin star at her restaurant, Murano. But here, away from the hotels that line the shores of the Mauritian coastline, she is looking for something more natural, more native.

This is why we are in the tiny town of  Trou d’eau Douce. The 2012 MasterChef winner Shelina Permalloo, whose fusion cooking is rooted in her Mauritian culture, has sent us here. Permalloo wowed the judges with her aubergine spicy fritters with wild garlic and tomato salsa and papaya. Since her win earlier this year, she has wanted to do more for Mauritian food. “It’s an interesting mix,” she says. “It’s really delicious.”

Angela, myself and Angela’s friend, the chef Neil Borthwick who works at London’s two-star Michelin restaurant The Square, are the only people here. This is mainly because it is pouring with rain. “No one goes out in this type of rain,” the proprietor of the restaurant says as water pours down from the roof.

But we trust Shelina, who has told us to make sure we are served traditional Creole food. “Some places water it down for the tourists,” she says. “You need to ask for the real thing. It’s hot and spicy.”

And we certainly get it. The starters – a selection of Indian dosas – come with a stunning array of fresh pickles, a chilli dip that takes the roof off my mouth and a shockingly tangy sauce that resembles horseradish. Angela looks delighted as she ladles it on to her dosa. The main course is a thali – butterbean stew, fish curry, octopus – accompanied by the ever-present tomato-based Creole sauce of the island. “It’s called rougaille,” says the girl serving us (it’s a family-run business; she’s an elder daughter). She ladles the rougaille over my plate of fish curry – a chilli-flavoured yet sweet sauce with a hint of paprika. Angela and I agree that it’s delicious.

In the daylight the following morning when, for about five minutes, the rain stops, I see that Trou d’eau Douce is beautiful. A man at a local café where we stop for a soda tells me the town’s name means “sweet water”, and there is water flowing everywhere. It’s a small place tucked away among banana plantations with barely a tourist to be seen.

Many tourists never encounter local places to eat in Mauritius and given that Michelin-starred food is a rare luxury – the multi-Michelin-starred Alain Ducasse’s Spoon at the Saint Géran hotel closed recently – it’s worth venturing away from your hotel. The Deer Hunter restaurant at the Constance Belle Mare Plage resort focuses entirely on local food.

Gastro-tourism, in terms of people looking for a more “island” experience, is booming here. It only takes one trip to the Port Louis market in the Mauritian capital, to find out why. It’s quite an experience. It’s hot, sweaty, noisy and smelly, and the stalls are heaving with unusual fruits, vegetables and spices. Angela walks around smelling everything. Huge bunches of thyme scent the air. Sacks of rice, split peas and lentils bulge over. Every stall seems to sell a wide variety of squashes in every hue – purple, green and yellow.

Shelina has suggested trying the street food. “Gateaux piments [chilli cakes], dal poori: you should get all the toppings, usually butterbean curry, coriander sauce and chilli sauce – the combination is brilliant.” I try a chilli-infused tropical fruit bag, and my eyebrows nearly blow off.

Angela is here for the Festival Culinaire Bernard Loiseau, which involves her cooking with an island chef as part of a culinary competition established by Dominique Loiseau, the widow of Bernard. The idea is for the Michelin-starred European chefs to combine their style of cooking with the emerging style of the island chefs. Thus she spends half her time trying out dishes in the kitchen of the Belle Mare Plage and the rest adapting local recipes to suit her style. She and her island chef, Kamlesh Doorjean from the Constance Le Prince Maurice hotel, cook up breadfruit, patole (a bit like marrow), pipengaille, christophina, baton mouroum.

Angela’s feeling about Mauritian food is that “it is a very diverse way of cooking – lots of spices, herbs and a different way of using sauces”.

Much of the diversity comes from the island’s history. It has been ruled by the Dutch, the British and the French. Most chefs have been trained to cook in the French style with a twist.

At the Deer Hunter we eat chilli cakes, saffron-infused rice and lobster with coriander. Lime and mango feature prominently in the menu, as does the spicy rougaille sauce. Doorjean tells us that everything cooked in his family home is served with this Creole sauce. “We like our food very spicy,” he says.

“It’s incredible the range you find,” says Angela, sitting down to tuck in to noodles, vegetables and garlic-infused water, a break from the rich Michelin-starred food she has been eating all week. She sighs and closes her eyes. “I think I might actually be able to relax now,” she says.

Just then, the sun comes out.

TROU D’EAU DOUCE
Chez Tino: The seafood is lovely, along with typical plates such as Creole rougaille sauce
Le Café des Arts: Worth trying, but you need to book
Le Touessrok: Best restaurant, and a beautiful place
Resto Sept: Hot and spicy home-cooking

UNION FLACQ
Chez Manuel: A great example of the Chinese influence. Try the mine frit – delicious with garlic water