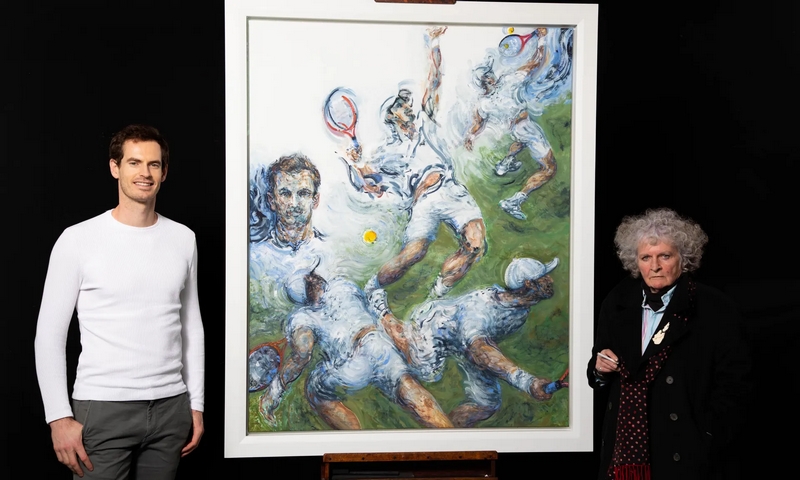 This article titled “Andy Murray portrait by Maggi Hambling to go on show in London” was written by Mark Brown Arts correspondent, for The Guardian on Thursday 12th March 2020 15.56 UTC

It was during a period of injury that Andy Murray decided to unleash his inner Jackson Pollock one night. “I ended up with paint on the ceiling and all over the floor. It was horrific,” the tennis star says.

But it was this newfound interest in art that led him to meet the British artist Maggi Hambling, whose new portrait of Murray is to go on display at the National Portrait Gallery. To this day, the pair disagree on how long she made him pose in his Wimbledon whites, while pretending to serve and return with his forehand and backhand.

“It was actually a very short time,” Hambling insisted. “He says 10 minutes, I say less.”

Murray recalled it slightly differently. “I kind of thought I would basically just be sitting. Posing in these positions … felt like quite a long time for me. I was there for three to four hours in total, we did have breaks. It was difficult, it was a physical morning.”

The affection between artist and sportsman was obvious, the portrait a result of mutual admiration and now friendship.

Murray’s disastrous attempt to have a go at art himself was a result of finding his wife’s canvases and paint in the house.

“It’s like most things really, you think, ‘I could do that’ or ‘that’s not difficult’,” he said. “My wife was out that night, I was by myself in the house. She came back from dinner and was like, ‘What the hell have you done?’”

The Murray artworks are, sadly, probably lost to the world. “Honestly they were horrendous, really bad.”

The experience spurred him to try to understand and appreciate art, which led to him meeting and becoming a fan and friend of Hambling. The admiration is mutual. “I’ve been a great fan of Andy’s forever really,” said Hambling, who loves tennis. “When I was a child, Americans always won everything and what I admire about Andy is that he’s his own person, he is other things as well as a tennis player.”

Hambling recalled Murray’s first visit to her Suffolk studio. “I was really impressed at the way you naturally looked at paintings. Not many people go up close and look at the detail and go back again… You seem to do that quite naturally.”

For Murray the friendship has also been an education. “I’m quite naive when it comes to art so when I spend time with Maggi I tend to ask lots of questions and understand it better,” he said

The painting enters the national collection thanks to a cash gift from an anonymous donor. Along with two preparatory drawings it will be on display in London until May, after which it travels to Edinburgh where it will go on display at the Scottish National Portrait Gallery.

Hambling is a star of British art although she does have her detractors. The former theatre critic Charles Spencer once wrote that two of the sculptures “he would like to smash” were Hambling’s sculpture of Oscar Wilde behind St Martins-in-the-Fields in London (“Hideous is too gentle a word to describe it”) and her famous four-metre high Scallop on the beach at Aldeburgh, a tribute to Benjamin Britten.

Murray, however, is a huge admirer and now owns seven Hambling paintings. He said the sittings, last September, were fun albeit not what he was expecting.

“I made him do these impossible poses,” said Hambling. “He brought his whites because, of course, it had to be Wimbledon. If you think about tennis you’re either hitting the ball against the sky or against the grass so Andy’s movement between the two is very much what the painting is about.

“Most people’s idea of a portrait is someone sitting on a chair, their head and shoulders. That’s not how it is for me. Andy is about playing tennis. You are the most miraculous tennis player, that’s why it had to work as a painting about movement.”

Both of them think there are similarities between artists and tennis players. “It is all hand and eye,” said Hambling. “Andy is obviously a complete lunatic giving his life to tennis as I’m a lunatic giving my life to art, but it is hand and eye but most importantly heart. You have to be completely obsessed.”

Murray said tennis players and artists were both at their best when they were in the zone, not thinking and letting things just happen. “When you start to overthink things it doesn’t work.”

Murray, a double Wimbledon winner and Olympic gold medallist, is not known for his effusiveness so when asked what emotions he felt looking at the painting he was typically low key.

“I really like it. Because it is just very different to what I expected. When you speak about a portrait I didn’t expect to see something like that. I like it and obviously because I know Maggi really well too, it just means a little bit more. There’s a personal relationship there.”