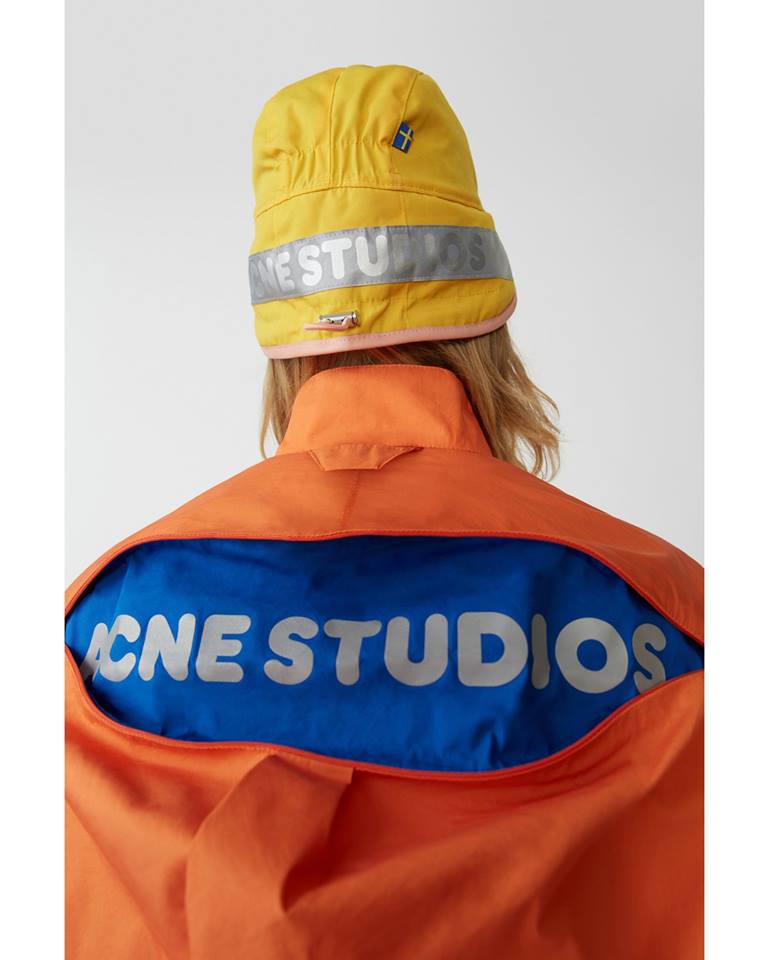 This article titled “Acne Studio’s Jonny Johansson: the designer who started millennial pink?” was written by Morwenna Ferrier, for The Observer on Sunday 28th October 2018 07.00 UTC

It’s hard to determine exactly when everybody started dressing like Scandinavians, but we all do – even if we don’t realise it. Don’t believe me? Open your wardrobe. Thick, fisherman-style jumpers better suited for a trawler? White minimal trainers? No-nonsense outerwear and lots of black? That’s your Scandinavian uniform right there: practical yet chic, warm yet hip. And given that half the high street we shop on – the Swedish H&M group includes Cos, Arket and & Other Stories, and then there’s Monki and Weekday – is Scandinavian, it’s now impossible to avoid.

The real question is who started it, and here the answer is simpler. Acne Studios, which launched in 1996, is arguably the ground zero of this Scandi colonisation although it has never been interested in this Nordic hegemony, and didn’t foresee it would end in high street domination; you can’t blame Marvin Gaye for Ed Sheeran. According to its founder and creative director, Jonny Johansson, the key to their success is climate. “We’re popular in bad-weather places – like the UK,” he says. Still, context is everything.

On the flight to Stockholm to interview Johansson, I’m reminded of two things that need clearing up before we get to the clothes. The first is the name, which our photographer queries as she points to a spot on her chin – it’s actually an acronym for Ambition to Create Novel Expression, although six years ago the label became Acne Studios, possibly to outline the difference. The second is the beige-pink colour of Acne Studios’ paper shopping bags, which became emblems for what is now known as “millennial pink” and have since become so cult, they sell on eBay for up to a tenner.

Johansson shrugs. “Do I feel responsible for starting something like millennial pink? The truth is, a few years ago, I was working late and I had a food wrapper next to my computer in that colour. I liked it, so we made the bags in it,” he laughs. “I think it’s lost all meaning.”

And yet, if you join the dots, both the colour and brand point towards a certain type of hipsterism which has now gone mass. Acne Studios initially made its name with slim jeans. So did hipsters. Although as one Swedish friend frames it: “Acne is both our Burberry and our Topshop.”

I’ve been invited to Sweden to view a collaboration with another hipster hangover, Fjällräven, the brand that makes the cutesy compact knapsacks beloved by the millennial-pink crowd. These days an audience with Johansson is so rare that if he invites you, you go whatever the reason. It’s not that he’s a hermit – at fashion week, a few months later, he amiably performs the usual backstage interviews – but he doesn’t see the point in talking. “If I don’t have anything to say, why the fuck do I do interviews?” His last interview, I discover, was “several years ago”.

Over a glass of water, we view the collection: serious winter-wear, caps and bags, in clashing primary colours. “The coats are the warmest coats you’ll ever wear,” he says. He’s right – while testing the jackets over 700 miles north of Stockholm, we have to take them off because we get too hot. “And with the bags, we all had them as kids and hated them, but now they’re everywhere”.

We meet on a warm day in Norrmalmstorg, an upmarket part of Stockholm. Johansson, 48, is avuncular and handsome, and dressed in navy cords and a navy jacket. He talks in short, clipped sentences, smiles occasionally and employs long pauses.

Until he was 19, Johansson lived in Umeå, a town eight hours north of Stockholm. “Reindeer country,” he says. He had a relatively creative upbringing. His father worked in education in the military, but also played guitar. His mother was an artist. Johansson leaned towards music, and spent his teenage years in post-punk bands, with some success: “Enough to make me think it could be a career”. He still owns 60 guitars. Married with two sons, he now lives 10 minutes from the city, “on a piece of grass where my mother’s grandfather grew up,” built when Stockholm became overcrowded. It was, he says, “the socialist dream, although I’m more of a social democrat.”

I never know what I’m going to do. I tend to sabotage things that do well

His influence within fashion has been building over the years. For one, he was early to the power of the influencer, with the brand initially making 100 pairs of jeans which they distributed among “creative kids” in Stockholm. Then there are the bestsellers, such as the Acne Studios Pistol boot, a black zip-up style which spawned a thousand copies. Acne Studios put us in straight jeans when the world was in bootcut.

But he wants to “move on from all that”. It’s not that Johansson is difficult to interview, he’s just a little gnomic, and “not that interested in fashion”. For one, he formed Acne as a collective, producing furniture, music and film – including the cult magazine, Acne Paper – with fashion more of an afterthought. They started out making drainpipe jeans: “Then I got bored, or lost confidence, I’m not sure.” They decided to branch out. This was a time when fashion was hinged on the high end minimalism of Jil Sander, and when Scandi style meant Filippa K in neutrals and black. By contrast Acne, as it was then known, was less predictable, and more colourful. “I never know what I’m going to do. And if I do, I tend to sabotage things that do well.” He now describes his designs as “maximalist minimalism”.

The fashion industry laps it up, even if Johansson remains more cautious. “I was supposed to have a coffee with Edward Enninful [editor in chief of British Vogue]. But I think he stood me up. Or the other way round.” He was approached by Kanye West, too. “That was a funny experience. He said he wanted to work with us, and that was when Virgil [Abloh] was his assistant. It was the most awkward situation ever. Kanye was treating him like…” he pauses. What does he think about Abloh’s appointment as artistic director of menswear at Louis Vuitton? “I don’t dare to say anything. I like to do shows because it’s fun but I don’t like the event. I don’t like the celebrity aspect of fashion. I have no desire to be a celebrity myself and to have to play a little part.”

Fashion has always fetishised other nations, and for some time looking French (deliberately scruffy, more black) dominated the field. But in the past few years (having filled our homes with Ikea) the pull to actually look like our wry, cold, geographical cousins took over.

For some it began with 2011’s TV drama The Killing, which launched a thousand Faroese jumpers, although fashion historians might offer up 2016 as its peak, the year hygge, a Danish word which translates as warm conviviality in a cold climate, exploded internationally.

Well documented, the Scandinavian way of being has become a valuable export. We read Scandinavia (from Swedish Stieg Larsson’s Millennium series to Norwegian author Karl Ove Knausgård’s existential six-part My Struggle) and we watch Scandinavia (from The Killing to Borderliner, disturbing thrillers described as “Scandi noir”). Our houses are full of Scandinavian furniture, not just from Ikea, but pricier places like Skandium and Made. The hygge economy grows ever stronger, although it’s nigh on impossible to value a state of mind.

In the spring, rumours that Acne Studios was up for sale generated excited gossip – it’s currently thought to make more than €200m a year. Turnover doubled between 2013 and 2016. Scandi style has now become so prevalent it’s a wonder we use the word “Scandinavian” at all. We might as well call it style and leave it there. Even Topshop is in thrall, last year hiring David Hagglund, a Swede, as its creative director. The hippest labels on social media are Scandinavian – Ganni (Danish) and Eytys (Swedish) to name two. In the wake of hygge mania, a global taste for cinnamon buns is thought to have increased the price of cinnamon by 20%.

Just as it is impossible to talk about Scandinavian style without talking about The Killing, Johansson turns to Sweden’s climate, and the impact it has not only on clothes, but mindset. “I love Stockholm from April to November, but the rest of the time, the darkness, it gets to you.” For this reason, he travels half the year, something he calls “sun chasing”. It’s not that we’re all depressed, he says, “but there is a problem”. The flagship store, a former bank where a 1973 hostage crisis which coined the term Stockholm syndrome took place, is next to our hotel. With typically dark Nordic humour, I’m encouraged to visit not to view the clothes but to look at the safe where the hostages were kept.

Johansson describes his approach as multi-disciplinary, and himself as both “a creative” and “a golden retriever – if you like what I do then I become more positive about it.”

He doesn’t like fashion because he isn’t interested in trends, preferring to design on a whim, a move which often baffles critics of his shows. In 2016, he did a line inspired by military-wear because he did military service. Another time, he started making lots of pink and purple pieces because he thought they were “awkward”. A keen cold-water surfer, for the last few years he has mostly been inspired by surfwear, and spends his holidays in his summer house or following the heat. “Surfing is the only thing that interests me,” he says, clicking on a series of YouTube clips of surfers. “It’s all I really want to talk about. I certainly don’t see myself working in fashion all my life.”

Two years ago, around the time Scandinavian fashion emerged in the UK, I asked Kristian W Andersen, the creative director of the Copenhagen International Fashion Fair, why we all want to dress like Scandinavians. “Our way of life is on the radar internationally,” he told me. “We are not only successful in fashion but also in architecture, furniture and design. Many countries look to us when it comes to our values, our systems, and our successful work life. I think people are really buying into the tales.”

Ida Petersson, the Swedish chief buyer of Browns, who studied the label as part of her degree, thinks the beauty of Acne Studios is that they distil the Scandi mindset: “In Sweden it is cold nine months of the year. They just make being cold cooler.” I ask Johansson the same question and he looks baffled. “I just think it was a lucky, funny moment for us,” he says. “We always tended to look to the UK for what was cool. It’s just that now, you look at us.”